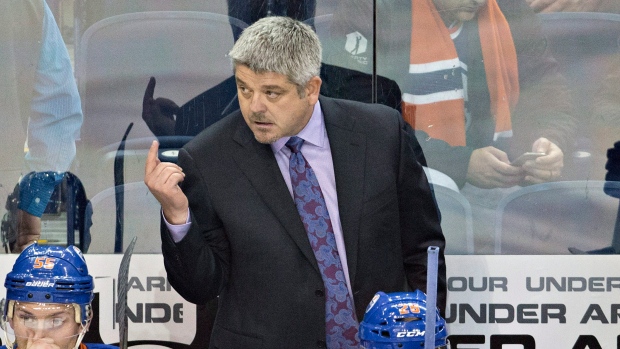 Lost among the commotion of Garret Sparks’ emotional debut on Monday night were the pointed words from Oilers head coach Todd McLellan at the other end of the Air Canada Centre hallway.

McLellan didn’t specifically call out Jordan Eberle and Ryan Nugent-Hopkins by name, but it doesn’t take much more than a glance at the scoresheets to figure out whom he was referencing.

The Oilers limped back to Edmonton with a 1-3-1 record on their Eastern Conference excursion. They managed just two goals against two teams buried at the bottom of the standings - Carolina and Toronto - including Monday’s lifeless shutout loss to Sparks.

“When I look at this trip as a whole, we had some key, key people really underperform on the trip,” McLellan told reporters. “Significant minus numbers, not hitting the score sheet. It can’t always be [the top line] that provides that.”

Eberle, 25, has been invisible since returning from injury on Nov. 6. He went without a point in five games and was a staggering minus-8 on the trip.

Nugent-Hopkins, 22, did help generate two of the Oilers’ six goals on the trip with two assists. But he didn’t score a goal and was also minus-8 on the road swing.

Say what you want about the plus/minus stat, but if Eberle and Nugent-Hopkins end a trip a combined minus-16 compared to minus-2 for Taylor Hall and Leon Draisaitl, it speaks to a stark difference in play.

Naturally, the Oilers miss the infectious energy and enthusiasm Connor McDavid brought to the franchise. The team aches for his speed, his playmaking and his vision.

More than anything, though, the Oilers miss McDavid because they revert to a one-dimensional matchup team when he isn’t in the lineup. Draisaitl and Hall have been tremendous on the top line, but they are Edmonton’s only real threat. The Oilers are a coach’s dream opponent in today’s NHL.

Edmonton’s matchup problems are only exacerbated on the road. Mike Babcock was able to focus defencemen Matt Hunwick and Morgan Reilly, along with forwards Daniel Winnik, Nick Spaling and Michael Grabner almost exclusively on Hall, Draisaitl and Teddy Purcell on Monday.

The Oilers weren’t a very good team (5-8-0) before McDavid took a spill into the boards a month ago. Their 3-7-2 run since then, looking so much like the Oilers of old, speaks volumes about how far they have to go.

Babcock suggested after the morning skate on Monday that the Oilers were ahead of the Leafs’ rebuild, given that Edmonton has so many top picks already in the NHL while most of the Leafs are in the AHL or junior. Aside from a cornerstone like McDavid, it’s fair to debate whether the Oilers are truly further down the path from Toronto.

“We’re not where we need to be,” McLellan said postgame. “We’ve got work to do as a team, work to do as an organization to get bigger, stronger, harder, and physically win more battles than we lose.