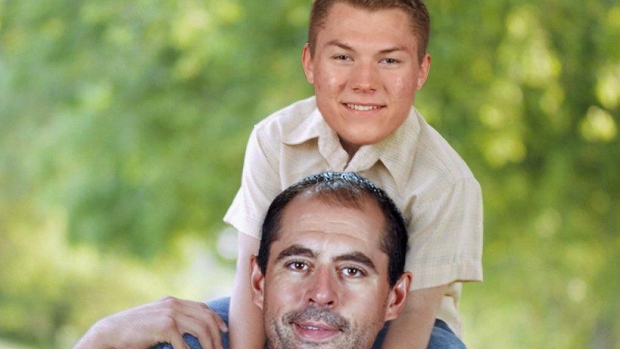 Ever since Curtis Lazar moved into the Phillips family home last weekend, the Internet has been filled with jokes and one-liners about the unique living arrangement.

The @Capital_Gaines65 Twitter account received a lot of notoriety for its fake picture of Phillips giving Lazar a piggyback ride in the park. The two are often viewed as having a father-son relationship - in the same way that Daniel Alfredsson and Erik Karlsson were portrayed a few years ago.

And now a new Twitter account has been created that is a parody of the texts that Chris Phillips allegedly sends to Curtis Lazar on a daily basis.

The description of the @phillipstexts account is: "These are texts from Chris Phillips to his young houseguest Curtis Lazar."

@phillipstexts has taken off in the last 48 hours, quickly gaining over 1,000 followers -- including Lazar, who started following the account himself last night.

"I looked at my feed and saw that a couple of people were re-tweeting it. I didn't think much of it, but now it seems like it's really taking off and I can't help but laugh at it," Lazar told me today. "The two of us are getting a pretty good laugh out of it."

Here's a sampling of some of the @phillipstexts tweets -- with all of them poking fun of Phillips age:

@phillipstexts: hey have you seen my palm pilot

@phillipstexts: missing a couple friends dvds in case u have them. season 3

@phillipstexts: what does yolo mean

@phillipstexts: because i wld love to go out with karl sometime

Lazar told me this morning that those last two tweets above were his favourite so far. But how does Phillips feel about being portrayed as the old man who texts a bunch non-sensical stuff to a teammate almost half his age?

"There are a lot of creative people out there. What can you do, but laugh? I think it's pretty funny," Phillips said with a big smile today. "It sounds like I've got one foot in the grave and I'm 36 years old. But I guess when you look at the difference in our ages it makes for a good joke. It definitely makes me feel a little older than I am."

Phillips wife Erin has been getting a good laugh from the account and so too have a handful of teammates. Even Bobby Ryan started following the account on Twitter yesterday and this has the potential to become Ottawa's version of the @boringmonohan account that has brought a lot of laughs to Flames fans.

There is also a parody account showing the texts going back the other way -- from Lazar to Phillips. @curtistxtschris doesn't have quite the same following, but Phillips told me he got a real kick out of the following fake text:

@curtistxtschris: Got your note in the kitchen about leaving the milk out. Not sure what an icebox is though, just gonna put in fridge for now.

The question now is who is behind the @phillipstexts account. Lazar said the first thing he did was check to see who the first couple of people that @phillipstexts was following - because that is often a dead giveaway of who really is behind the account. If that's the case, @wtyky, @bonksmullet and @senschirp are three prime candidates.

The theory was also floated out by Patrick Wiercioch that perhaps the account is being run by a teammate inside the dressing room. A couple of years ago, several Sens teammates were in on a parody account of former player Jim O'Brien. But this time around, Lazar isn't so sure that's the case with this @phillipstexts handle.

"The rumour floating around is that it's somebody inside the dressing room, but I really don't think there's anyone in here who is smart enough to come up with some of those tweets."