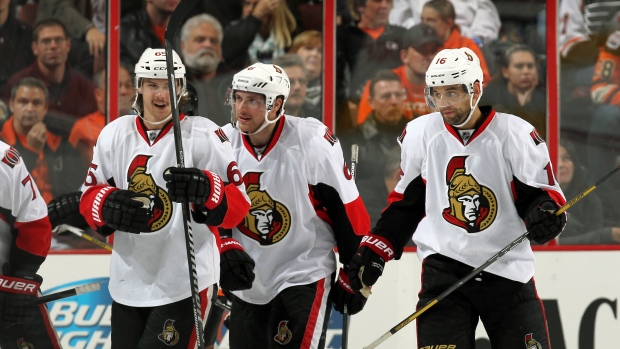 Ottawa Senators fans have been a nervous bunch over the past 18 months.

They watched two captains walk out the door in consecutive summers, leaving many with the distinct impression that Ottawa was not the preferred destination for star players. And if you trace the line back beyond Daniel Alfredsson and Jason Spezza - and connect the dots to Dany Heatley, Zdeno Chara and Alexei Yashin -- you could certainly understand why Senators fans may have an inferiority complex.

So when the Bobby Ryan contract negotiations seemed to cool off last month, it was met with a collective, "Uh-oh -- here we go again," by Senators fans. And in the absence of any tangible news, the rumours started to churn about how another star player was orchestrating his exit out of town.

Ryan doesn't like it in Ottawa. He doesn't like the head coach. He wants to kill penalties. He wants to play in Philadelphia. Eugene Melnyk won't open his wallet. Everybody had a theory as to why Ryan wanted to take a wait-and-see approach to his commitment to Ottawa.

And suddenly on Thursday morning, all of that changed with word that Ryan had agreed to a seven-year contract extension worth $50.75 million. "He is truly the type of player we want to build our team around," Melnyk said in front of a packed news conference. The negotiations for a contract of this magnitude are never simple and the owner acknowledged that at the podium. If there was any hesitation from Ryan, it was never about the city and its fanbase.

Calling the decision to stay in Ottawa a "no-brainer", Ryan was quick to point out that the city has embraced him and his fiancee, Danielle from the moment his trade to Ottawa happened last July. "We feel like we have found the place we can start a family and call home," Ryan said on Thursday morning - as if he was directly addressing those fragile fans in Ottawa who felt like their city wasn't a preferred destination for stars.

General manager Bryan Murray is well aware of the reputation that stars don't want to stay in Ottawa and he says the organization has made a concerted effort to dispel that notion with their moves over the past couple of months.

"For the fans as well, we want to indicate to them that players want to be in Ottawa," Murray said on Thursday. "All along, that's been our intent. With Turris, MacArthur and now Bobby Ryan and we're trying to get something done with Marc Methot to show that this is a secure team and we just have to add to it going forward. And hopefully that happens fairly quickly for everybody's sake."

Murray confirmed that another contract offer has been made to Methot's camp, but they are waiting to hear back.

Moments after announcing the Ryan extension, Melnyk stepped back up to the podium to announce that Erik Karlsson was named as the ninth captain in franchise history. This move seems to cement Karlsson's status in Ottawa. The club could have easily chosen Chris Phillips as the captain, which would have been warmly received in this market. Instead, they opted to make Karlsson the face of the franchise moving forward. They've handed him the keys and in turn, he's promising to deliver.

"It's an incredible opportunity and it's a task that is pretty rare," said Karlsson, who admitted that he had a 40-minute phone conversation with former captain Daniel Alfredsson on Thursday. "I'm excited about the next chapter and moving forward and taking responsibility for what is to come. I'm really looking forward to the upcoming season and beyond that, so I'm just really thrilled right now."

On one day, the Senators made two superstars happy - but more importantly, they gave a single fanbase the ability to take a collective sigh of relief.