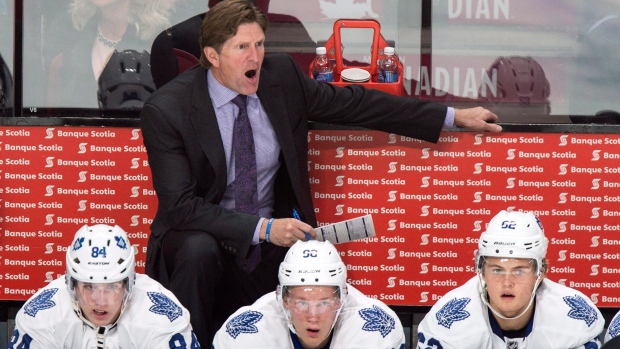 Mike Babcock has pulled very few punches about the current state of the Toronto Maple Leafs and the work it’s going to take to repair the damage that’s been caused under the old regime.

He consistently points out that the Leafs skaters are flush with bad habits. In Babcock’s eyes, these are the priorities for the club in the early going. If Babcock can’t iron out the issues embedded in both the players and the organization, he knows he’s going to have a difficult team turning the ship around.

A big focus early on for Babcock has been player shift length. Babcock’s been adamant about bringing the average shift length for both forwards and defencemen in Toronto way down, and this is consistent with how he’s historically coached. In Detroit, Babcock was almost militant about shift length. It’s worth recalling this quote from an old ESPN the Magazine article, with then assistant coach Paul MacLean talking about how seriously the team takes every passing second:

Detroit assistant coach Paul MacLean is never without his stopwatch, clicking it each time the Wings make a line change. "We use our own time," says Babcock, eschewing the arena stat sheet. For playoffs, he wants short shifts -- 40 seconds, tops -- making sure stars like LW Henrik Zetterberg stay fresh enough to sustain the tempo his two-way game demands. Quick, smart line changes are so crucial that the Wings devoted an entire practice to them during an unexpected layover in St. Louis last season. Bonus benefit: Quick changes prevent positioning breakdowns that result in odd-man rushes.

The 40-second shift has seemingly been passed down from coaching generation to coaching generation, but it’s not a number pulled out of thin air. Player performance starts to go off of the rails once you breach that threshold. (Anything beyond 60 seconds can be utterly disastrous.) I don’t know how coaches first arrived at that number, but by my estimation, it’s a pretty reasonable benchmark:

From the 20-second to 40-second intervals, players are generally enjoying success. The players are reasonably fresh. Their opponents may be fresh, but they may also be growing fatigued. That’s why you see positive shot differentials for players earlier in shifts.

However, as you get past that 40-second mark, things really start to dive south. I’m particularly amazed at how dire things grow for skaters beyond, say, the 60-second mark. We are talking about Corsi% levels that are now replacement level territory – something we would expect from your run-of-the-mill AHLer in an NHL setting. I doubt that this curve hits each player exactly the same; freakishly conditioned skaters like Wild defenceman Ryan Suter may not be impacted as harshly as your pure sniper forward who gets caught on a long shift. Still, at a macro-level, we expect all players to diminish with time.

So, it’s great that Babcock’s trying to drive down shift times, something he observed as problematic in years past with this team, and something he entrenched in his successful Red Wings clubs. But, is he having any impact early in the season? Are Leafs skaters really looking for the bench earlier in the shift?

If you’re curious as to how this compares league wide, I looked at Toronto’s average shift length (by position) and ranked them against every other team this season.

The only team with average shift lengths shorter than the Maple Leafs at the forward position resides in Calgary (about 36 seconds, which are ridiculously quick). Calgary has quick turnaround at the defence position too (40 seconds), as does Vancouver (41 seconds).

Shift lengths may seem like a minor detail in the grand scheme of things, but it’s consistently been one of the points raised by Mike Babcock and the Leafs as they try to clean-up the mess left for them by prior leadership. And though we may not see Babcock’s team turn up very successful in the win/loss column this year, we can already see the sort of impact he’s having, and how it may pay dividends when this team’s ready to compete a couple of years from now.