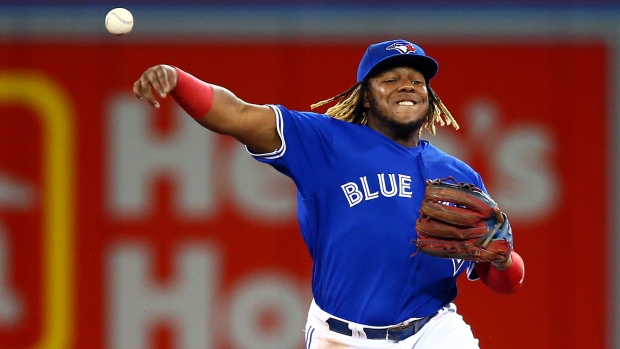 TORONTO — Vladimir Guerrero Jr. and the Toronto Blue Jays have dodged a bullet.

Yanked from the game Saturday after two innings when his left knee started bothering him, the 20-year-old’s MRI results came back as clean as possible, showing only some minor inflammation, the club confirmed Sunday morning.

“They got the MRI on me and it was nothing major, just a little bit of inflammation in my knee,” Guerrero Jr. said through team translator Tito Lebron. “I feel a lot better today. We’re just going to be cautious about it and when I’m ready to go, I’m ready to go.”

Guerrero felt something in his knee after a defensive play that saw him cut in front of shortstop Bo Bichette and torque his body to make a tough throw across the diamond in the top of the second inning.

Seattle Mariners second baseman Austin Nola ended up beating the throw, and Vladdy Jr. didn’t come out of the dugout to start the third inning, causing a stir on social media and some anxious moments for club brass.

He was immediately sent for an MRI after the game.

“I felt a little tweak on that play with me and Bo,” Guerrero Jr. said. “Spoke with the trainers in between innings and felt a little bit uncomfortable. They just want to be cautious on that.”

Considering it’s the same knee that cost him five weeks last season in Double-A due to a patellar tendon strain, the Jays exhaled when the imaging showed only minor irritation in the joint.

“It was totally different from last year,” Guerrero Jr. said. “I wouldn’t be standing here. The one last year, I couldn’t even walk last year, pretty much. I’m good. It’s just something we all want to be cautious about and, hopefully, I’ll be back in the lineup very soon.

“When I feel that my knee is fully recovered, I’m going to go out there.”

Expect the Blue Jays to be cautious, but the decision not to put him on the 10-day injured list says a lot.

Vladdy has been hot since putting on a show in the Home Run Derby, raising his average from .249 going into the all-star break to his current .274.

After dominating Double-A for 16 starts, Nate Pearson will finish his season with the Triple-A Buffalo Bisons.

Promoted Sunday, the Jays are currently working through when exactly he’ll make his debut at the highest level the minors has to offer, but he’d be on regular rest for Tuesday, the second game of a four-game series in Rochester.

With Anthony Kay, one of the arms that came over in the Marcus Stroman package, lined up for Wednesday, the Jays now have two of their best pitching prospects on the verge of the major leagues.

Kay, who has posted a 3.05 ERA in four starts with the Bisons, has to be added to the 40-man roster this winter and is in the conversation to join the big league club when rosters expand in September.