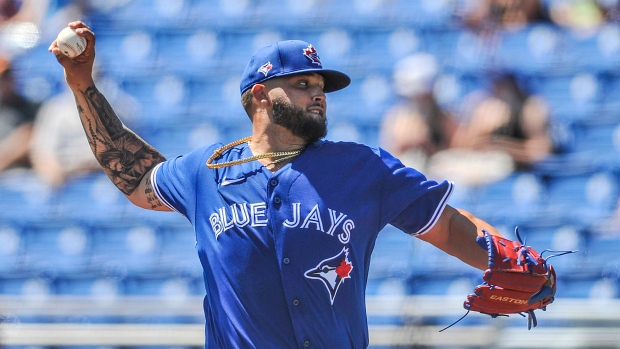 TORONTO — The Toronto Blue Jays have put Alek Manoah on the fast track and left the ultimate arrival date in the 2019 first-round pick’s hands.

Starting a pitcher with just 17 professional innings under his belt in Triple-A is aggressive as it gets, but that’s exactly what the Jays’ player development group decided to do as minor-league baseball gets going Tuesday for the first time since the end of 2019.

It’s just more evidence of the win-now mode the club has shifted into.

A lost 2020 season for prospects and the mysterious nature of trying to develop at alternate sites across baseball last summer made for some interesting internal debate when it came to assignments this spring.

In Manoah’s case, it was balancing the relative lack of inexperience in terms of pro innings with his NCAA pedigree and the fact he’s already 23 years old.

Then he went out and became the talk of spring training, showing big-league-ready stuff in multiple outings against veteran New York Yankees bats.

“It was definitely different,” Kim said. “Each year you go into spring training weighing a bunch of different variables and factors as far as past performance, recent performance, where each player is in their development curve and a little bit of how they look in spring training, but not as much. And this year we probably factored that in a little bit more, given the last year.”

Even though they were just Grapefruit League games in early to mid-March and those should always be taken with a grain of salt, it was impossible to ignore the dominance.

Manoah struck out 15 over seven scoreless innings, allowing just one hit and walking no one. His only blemishes were three pitches that got away and ended up plunking batters.

It was as good as it gets for a prospect showing in March, and it made an impression on Jays’ decision-makers.

He needs to be challenged.

“The thought process behind Triple-A was mainly driven by two reasons: One, to challenge him at the highest level we thought he was ready for, and two, to put him in the best sort of team environment with a combination of players and staff where we felt really good about Alek’s potential to develop with that group,” Kim said.

“Obviously, Alek has not pitched a ton in full-season ball, but we felt like the combination of stuff, ability and specifically his competitiveness and resiliency would give him a really good chance of continuing to develop at a level where he’s challenged.”

With a Triple-A starting assignment, Manoah would only need to put together a mini run of strong starts with the Buffalo Bisons, who are playing home games out of Trenton, N.J., while Sahlen Field is renovated in anticipation of the Jays arriving later this summer, to have many clamouring for a call-up.

How many innings Manoah is available for this season will eventually be a question, as it will for many of the Jays’ young arms.

Kim says monitoring workloads will be an ongoing process that usually has no clear answer or definitive number.

“That’s one of the main things everyone is thinking about and aware of,” Kim said of innings limits coming off a shortened 2020 season for big leaguers and a completely lost season for minor leaguers.

“Some things we’ll have to look a little bit deeper at, but overall we’ve traditionally focused on fatigue levels, on seeing velocities maintained, obviously on the actual number of innings and pitches thrown, and different types of monitoring and fatigue testing. I think this year will be a good challenge to stay accountable and disciplined to those processes as we go through a season, and I’m sure we’ll learn a lot. I wish we had all the answers. We definitely don’t.”

Pitching prospect Eric Pardinho isn’t quite ready to go coming off Tommy John surgery, but Kim fully expects the 20-year-old right-hander to make it back in time to pitch for an affiliate this summer … Unfortunate to see righty Anthony Castro’s season paused by a forearm strain. Prior to landing on the IL on Sunday, Castro had put together six scoreless outings and was quickly becoming one of Charlie Montoyo’s most trusted options. Claimed off waivers from the Detroit Tigers over the winter, the 26-year-old’s 95-mph four-seam fastball and breaking ball have both been nearly unhittable in the early going … Hyun Jin Ryu (glute) is eligible to come off the IL for the series finale in Oakland … Heading west, the Jays bullpen is sporting the fourth-best ERA in baseball at 2.61 … Last week, the offence was struggling, scoring about 3.8 runs per game, which was under the league average. After breaking out against the Braves, the Jays sit 12th in baseball at 4.6 runs per game.

Not the stat you want to see if you’re catcher Danny Jansen, but that’s what the 26-year-old endured, going nearly a month between hits before a two-knock performance Sunday in the finale against the Atlanta Braves.

The oh-fer stretch tied the franchise mark set by World Series hero Ed Sprague back in the 1994 campaign.

Jansen’s ice-cold bat had him losing playing time to Alejandro Kirk, but the 22-year-old backup suffered a hip flexor injury and landed on the 10-day IL on Sunday, giving Jansen a chance to reclaim the everyday job.

Despite the good glove — his plus-3 Defensive Runs Saved mark is tied for second in baseball amongst catchers — Jansen will have to find a way to turn it around offensively or the Jays may be looking to the trade market for a veteran upgrade prior to the trade deadline.

“We’re going to manage his load and his work, but we have to communicate. We have to talk to him. If he feels like he needs a day off, we’re going to give it to him. That’s why he’s been at DH, we’re being careful.”

“Are there any under-the-radar prospects that could make a late season appearance like Alejandro Kirk did last year?”

ANSWER: Manoah is the ultimate wild card in terms of potential impact, but a couple of the players I thought could help in the second half have already been pressed into action.

Josh Palacios looked good in his first big-league cameo, while many of the young bullpen arms like Castro, Ty Tice, Anthony Kay and Thomas Hatch etc., have already been called upon.

There’s a wave of pitching coming with Manoah, Simeon Woods Richardson, who will start at Double-A, and Joey Murray, but I do wonder if Otto Lopez can potentially play a role if given a chance in August or September.

I wouldn’t call the 22-year-old utility infielder ready at this point, but he’s on the 40-man roster, he’s defensively capable at both middle infield spots as well as outfield, and his bat-to-ball skills give him a chance at a contact-oriented profile, similar to Santiago Espinal.

It wouldn’t be surprising to see Woods Richardson late in the year, either.

RHP Nate Pearson, Triple-A Buffalo: Now recovered from the groin injury he suffered in early March, Pearson will start the Bisons’ opener on Tuesday. Montoyo said he’s competing for a job and a chance to return to the big-league rotation.

RHP T.J. Zeuch, Triple-A Buffalo: After spending the minimum amount of time on the 10-day IL nursing shoulder tendinitis, Zeuch is healthy and likely to return to the big club in a long-man role at some point. He’s also part of the Bisons’ rotation, which also includes lefty Nick Allgeyer, Manoah and Jacob Waguespack.

A.J. Cole, taxi squad: The veteran righty has an opt-out in his minor-league contract this month, so expect to see him used at some point. The issue is he’s not on the 40-man roster.

Rowdy Tellez, Triple-A Buffalo: After batting just .183 through his first 18 games, Tellez was the odd man out when Springer returned and needed to DH. Tellez will get another chance, but his only job is to hit, so he’ll need to start doing that at Triple-A.

RHP Joey Murray, Triple-A Buffalo: He’s down the depth chart a bit at this point and currently slated to pitch out of the Bisons’ bullpen, but a solid run from the invisi-baller will get people talking about Murray as a potential contributor.

The Double-A roster is loaded with talent to begin the season and Martin starts alongside fellow top-tier infield prospect Jordan Groshans.

The plan is for the pair to split reps at shortstop for the Fisher Cats.

When Martin is at short, Groshans will play third, his likely long-term home.

When Groshans is at short, Martin will be patrolling centre field.

“Both of those young men have put a ton of time and effort and work into developing as shortstops, but also they’re talented athletes who can play other positions as well,” Kim said. “We do see value developmentally and athletically in bouncing around from spot to spot, as we’ve seen up here [in the big leagues].”

Nearly 11 months removed from draft day, how Martin fares against professional pitching over the first month or so will be one of the most interesting storylines to monitor.​