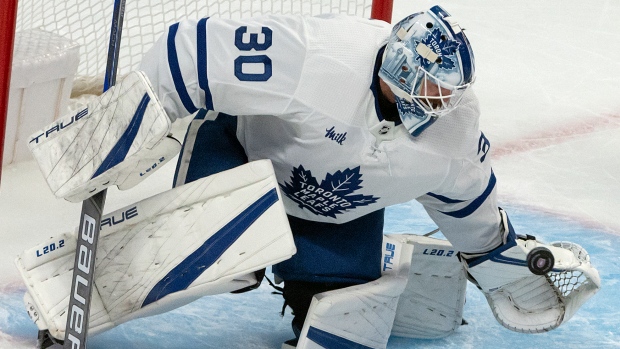 TSN SportsCentre Reporter Mark Masters reports on the Toronto Maple Leafs, who practised at the Centennial Centre in Gravenhurst, Ont., on Thursday.

Matt Murray and Ilya Samsonov have done their part to quiet any crease concerns through Toronto's training camp.

"Honestly, we don't pay too much attention to the goalies unless the puck goes in," said defenceman Morgan Rielly with a small smile. "They're both doing everything they can to get ready for the season so that's nice to see."

"He seems pretty even-keeled no matter what," observed veteran winger Wayne Simmonds of Murray. "Usually one of the first ones to the rink and one of the last guys to leave the rink. That bodes well."

The Leafs like what they're seeing on the ice and chemistry is also being built off the ice. Toronto spent the last couple days bonding in cottage country. The Gravenhurst getaway included a round of golf on Tuesday. Auston Matthews was part of Murray's group.

"I rode with Murr and it was nice to chat with him," the superstar centre said. "He's a bit of a quieter guy, but we had a lot of fun out there kind of messing around. I think our group kind of overachieved so we were pretty happy with it."

"It's awesome," said Samsonov. "It's a nice area. A lot of positive stuff. First time I play golf. Great arena here. Everything is good. Weather, too."

Leafs salute fans who came out to watch practices during team-bonding trip in Gravenhurst pic.twitter.com/jmWL59Tp82

Samsonov couldn't name just one guy when asked who he got to know better in Gravenhurst.

"Ahh, hard question," he said. "I don't know. Everybody is so fun, you know. It's great inside the team. You know, everybody is so friendly. We help each other. Everything is good."

Samsonov will make the trip to Detroit for Friday's penultimate pre-season game.

Murray will start on Saturday when the Leafs wrap up their exhibition schedule in Toronto also against the Red Wings. What has Rielly learned about the two time Stanley Cup champion so far?

"How good he is," the longest-serving Leaf said. "In practice he's been outstanding. In the pre-season games he's played, he's been outstanding. Having a chance to just talk to him, he's happy to be here and loves the game and puts in a lot of time. Before practice he's always doing stuff and trying to get ready. He takes it very seriously and he's extremely committed."

Toronto's new tandem is viewed as a big gamble, because the Leafs are looking for both guys to bounce back. Murray played in just 20 NHL games last year during an injury-plagued season with the Ottawa Senators. He has never played more than 50 games in a season. Samsonov played a career-high 44 games last season before the Washington Capitals opted not to extend him a qualifying offer.

"You need two goaltenders in today's NHL," said coach Sheldon Keefe. "We expect to use both guys. I don't think it will be a straight-up split in terms of alternating or anything like that. The goalies will sort that out with their performance. We believe in both guys."

Murray, who has two years left on his contract, and Samsonov, who signed a one-year deal in the summer, have a lot on the line this year. Despite the stakes and the competition to win starts, the pair have prioritized a strong partnership.

"So friendly," Samsonov said of Murray. "We push each other and try to get better every day."

"There is the gelling within the team itself and then there are the two goalies and their tandem," noted Keefe. "You kind of want that to be a team within the team. We're seeing those guys grow, along with [new goalie coach] Curtis Sanford and his leadership. This whole camp, in particular this trip, has been particularly productive in all regards there."

Samsonov has been struck by how modest Matthews is.

"He's a big star here," Samsonov said. "He's not shy, but how he is speaking with teammates, he's a [humble] person."

Matthews remains grounded, but his stature in the hockey world is only growing. On Thursday, TSN unveiled the top 10 names on its annual pre-season player ranking list. Matthews came in No. 2 behind only Edmonton Oilers centre Connor McDavid. McDavid was listed first on all 20 ballots. The Leafs, perhaps unsurprisingly, see it a bit differently.

"I'm obviously biased," admitted Rielly. "You know, he wins the Hart Trophy last year ... We all think he's the best. We got his back. He's our guy."

McDavid has topped the list for seven straight seasons, but the Leafs believe Matthews has the potential to unseat the Oilers captain.

The team-bonding trip provided a nice distraction during the dog days of training camp. The Leafs have a long way to go before they can accomplish anything substantial this season so staying focused is important.

"We just want to start off well and go from there," said Rielly. "There's some high-end players on our team and if you look back at the last couple seasons in terms of win percentage and points or whatever there's been some good stuff, but it just all comes down to the playoffs for us."

Coming off a shocking playoff collapse against the Montreal Canadiens, the Leafs opened 2-4-1 last season. They expect a better start this season. The Montreal upset may have shook Toronto's confidence, but the seven-game loss to the Tampa Bay Lightning last spring left the group feeling emboldened.

"To be honest with you, in some sense you get some confidence from that," said Simmonds. "I know we didn't beat Tampa, but they were the back-to-back champs and they went to the finals again and we were this close. I know being close only counts in horseshoes or whatever, but at the same time you can draw some positives from that and see where we're going in the right direction."

Toronto opens the regular season on the road against Montreal on Wednesday. The Leafs split four games with the last-place Canadiens last season.

"Last year, we didn't play too well against teams who weren't in playoff spots," Simmonds noted. "That was the gap between us and Florida and could have been potentially the difference in us moving on beyond the first round."

The Leafs went 31-11-2 (.727 points percentage) against non-playoff teams last season. Toronto finished seven points behind the Florida Panthers, who won the Presidents' Trophy. As a result, the Leafs faced the Lightning while the Panthers faced the No. 8-seeded Capitals.

"You got to be consistent," Simmonds stressed. "Obviously everyone's going to talk about the playoffs and we know where our shortcomings have been. But, at the same time, we got to make sure we're establishing who we are, our identity, early in the year and we got to continue to push that the whole year. At the end of the regular season you ideally want to be sitting No. 1 so you have the best possible chance to move forward and I think that's kind of where our heads are at."

While the battle for roster spots has dominated the conversation during camp, Keefe and his coaching staff have been implementing important tweaks to the team's structure.

"We do have a system in place that works for us," Keefe said. "If there's been an area of focus for us through camp it's been really trying to get a lot quicker through the neutral zone both on offence and on defence coming back."

William Nylander skated as a centre for the second straight practice.

"Willy has done that before and I think has the ability," Keefe told reporters following Wednesday's practice. "Frankly, I wouldn't read too much into it. If you kind of break it down, it is kind of a placeholder for John [Tavares]. I think it is important for Willy to get some reps through the camp and all of that. He does play centre at times. We might use him there in the final pre-season game that we play. It was really more that I wanted to get a look at [Pierre] Engvall, [Alex] Kerfoot and [Calle] Jarnkrok. It was just natural to put Willy in that spot."

Nylander hasn't played much centre since an ill-fated spin in the middle during a Game 5 loss to the Columbus Blue Jackets in the 2020 bubble playoffs.

"I like playing centre, wing," Nylander told reporters. "There's no one [position] I prefer."

The biggest challenge as a centre?

"The way we sort out the D-zone," Nylander said. "I mean, you play it differently as a winger. So, it's something you have to focus a little bit more on."

"With his skating and the way he thinks the game, I don't think that transition is really too difficult," said Matthews.

Nylander has been on his game during training camp, producing two goals and three assists in three games.

"He's strong," Murray told TSN following Monday's game in Montreal. "He's fast. He's got good hands. He's got a great shot. He's got good hockey sense. He's a complete player. He's killing penalties. I've been really impressed since I got here just with his work ethic, too, [and] how he competes at practice."

"The ability he has on the ice is very high," said Mitch Marner. "The stuff he does out there, sometimes it surprises you just how filthy he really is and how good he is."

Nick Abruzzese, Joey Anderson, Semyon Der-Arguchintsev, Max Ellis, Bobby McMann, Logan Shaw and Alex Steeves are on the roster for Friday's game, but among those bubble forwards only Steeves was invited on the team-bonding trip this week. Why?

"The big thing that really tipped the scales to come on this trip is, it's been very obvious to me that he really wanted this," said Keefe. "Going above and beyond and separating himself in terms of the effort and the physicality and the competitiveness. Not every day has been a perfect day, but his effort, to me, has been on another level and really putting himself out there and, frankly speaking, on another level then the other guys he's competing with. So, that's why he's on this trip."

Tavares (oblique) and Timothy Liljegren (hernia) did not skate on Thursday. Keefe says it was a planned day off and both are expected back on the ice on Friday.

Lines at Thursday's practice:
Bolded players are on the roster for Friday's game in Detroit

Our roster for tomorrow’s preseason game vs. Detroit 👇 pic.twitter.com/h5juN9MEHN