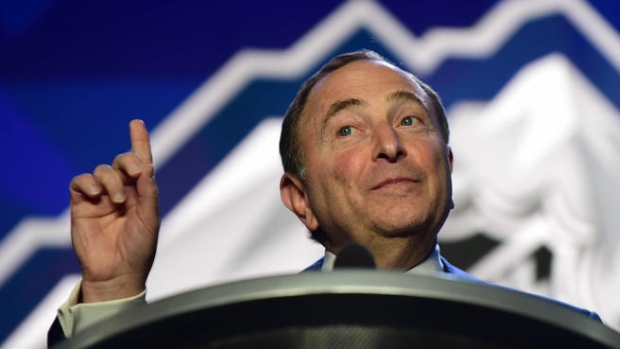 One of the items discussed on the NHL’s biweekly General Managers conference call on Tuesday was the idea of conducting the 2020 Draft virtually in June, before the 2019-20 season is completed, as first reported by TSN Hockey Insider Pierre LeBrun.

It's just one of the options being considered, but holding the Draft in June would be unprecedented in both timing and presentation.

But technology would be far from the NHL’s biggest hurdle.

Because there are a myriad of complications and questions that would first need to be answered for the league’s 31 teams and the NHL Players’ Association:

> With the season pending, how would the Draft Lottery standings be formulated? Would the current standings be frozen, would it be based on points percentage or some other format, such as the 68-game rollback?

> What would happen to draft picks with conditions attached? This isn't as complicated as you might think. Once the standings are finalized for Draft purposes and the lottery balls are drawn, then many – if not all – of the conditions will be satisfied.

For instance, if the Islanders make the playoffs, then the first-round pick from the Feb. 24 trade involving Jean-Gabriel Pageau will officially belong to the Ottawa Senators. Or if the Islanders win the Draft Lottery, then the pick will become a confirmed 2021 first-round pick. Either way, the conditions are resolved. Only one 2020 pick is contingent on a team winning the Stanley Cup – but that could easily be converted to 2021.

> Could teams make trades involving current roster players? Traditionally, that player would not be eligible to play in the playoffs. That may be the biggest sticking point with the proposal with the season not completed. The days leading up to the Draft mark traditionally one of the busiest weeks for transactions on the hockey calendar.

> Will the 2020-21 salary cap be set before the Draft is conducted? Think back to last June’s Draft in Vancouver, when the Canucks acquired J.T. Miller from Tampa Bay for a first-round pick. That trade was a mechanism for the Lightning to clear salary-cap space, the type of deal Tampa Bay and many other teams might need to revisit given the changing revenue environment as a result of the COVID-19 pandemic. Taking that ability away from teams might be enough to quash the proposal.

The salary cap was another item discussed on the call. As previously reported, teams were told that one potential option is for the salary cap to remain flat at $81.5 million, but that was not locked in and that all scenarios are still being explored.

> What will happen to draft picks traded before the Feb. 24 deadline? No one could have foreseen COVID-19 shutting down the NHL season, but clearly teams did not envision forfeiting assets to only enjoy the services of their rental player for two weeks.

Trades are very unlikely to be voided. Every first-round pick traded in the deadline period was for a player with term on his contract, or in the case of Pageau, was signed to a long-term extension upon arrival. The exception is Taylor Hall, who was traded on Dec. 16, and the Coyotes have played exactly as many games with Hall as they did without him.

But the Canucks have one of the more prominent cases for compensatory picks. GM Jim Benning traded two second-round picks and two prospects for true rental Tyler Toffoli on Feb. 17. Should they be eligible to get two compensatory picks at the end of the second round if the season does not resume?

> After all of those – plus any unforeseen – complications are worked out, then the big question remaining for the NHL would be: What’s the benefit for the league and its teams to jump through these hoops?

A quick temperature check of a number of GMs on Tuesday revealed that this is a proposal that might not be universally embraced.
"Seems to be a lot of work for little gain," one GM said.

“This makes zero sense,” another GM said. “I think it just gives you guys [the media] something to talk about.”

That may be it, exactly.

The answer might be in the fact that the NHL could generate significant buzz and attention prior to puck drop on the 2019-20 season resuming in July, this proposal coming the week the NFL Draft is making headlines in a quiet period without sports.

It's just that limiting big Draft trades – and commissioner Gary Bettman's ability to break into a Zoom-produced web chat with a "we have a trade to announce..." – may take a lot of the entertainment value out of it.

So in a year in which the Draft is already operating differently – with likely no Draft Combine, and three critical prospect viewing opportunities cancelled in the Under-18 World Championship, the CHL playoffs and Memorial Cup – Tuesday’s proposal was met by teams with apprehension and many questions.