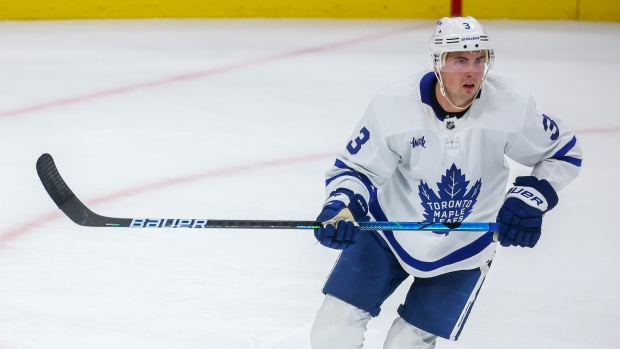 TSN SportsCentre Reporter Mark Masters reports on the Toronto Maple Leafs, who practised at Crypto.com Arena in Los Angeles on Friday ahead of Saturday’s game against the Kings.

"Justin likes really direct and honest feedback," the Leafs coach said. "We have given him that. It was certainly a little more direct today because it has been snowballing here ... He is an important guy that we need to get more out of."

"Learn how to drive play a little bit better," Holl revealed. "As defencemen we need to do a better job of putting our forwards in better positions."

With Jake Muzzin out indefinitely with a neck injury and Timothy Liljegren working his way back from hernia surgery, Toronto's defensive depth is being tested. Holl is averaging 20:24 of ice time per game, including 2:59 shorthanded.

"With the injuries we have had, he is an important guy for us on the PK," Keefe stressed. "He is our only right-shot defenceman at this time. He takes on a lot of heavy minutes defensively."

Per NaturalStatTrick.com, Holl has the worst expected goals against mark on the team. But it's not just Holl who's off right now. The entire defence core feels a bit disjointed at the moment.

"Our inability to move the puck up the ice efficiently is slowing down our game on offence and really hurting our game defensively as well," Keefe said following Thursday's 4-3 overtime loss to the Sharks in San Jose. "It starts with the D. Their first touch has to be better."

The team worked to address that during Friday's practice.

"We started with some skill development stuff we would normally do as part of our regular routine when we are at home," Keefe said. "We have been away from home for quite some time now. Generally, what happens is that over the course of the season in a busy schedule, some of the habits and details of your game start to slip. That is why we do skill development as much as we do. It is reconnecting with some of those principles that our defencemen, in particular, usually have the ability to execute at a high level. It hasn't been the case. We wanted to touch on that."

Toronto hasn't had a practice at home since Oct. 21.

Liljegren, a righty, and Jordie Benn (groin) are eligible to be activated from the long term injured reserve early next month. Both defencemen are currently on a conditioning stint with the Toronto Marlies in the American Hockey League.

“Our inability to move the puck up the ice efficiently is slowing down our game on offense & really hurting our game defensively as well … It starts with the D. Their first touch has to be better.”

Keefe doesn't believe changing the pairs will help so Morgan Rielly remains with T.J. Brodie while Holl continues to skate alongside 21-year-old Rasmus Sandin. There will be one change, though, on Saturday as Filip Kral makes his National Hockey League debut on the third pair alongside Mark Giordano.

"Of course a little bit nervous, but I'm excited," the 23-year-old from Czechia said. "I was waiting a bit for this moment. I'm excited and ready to go."

"Kral is a guy who has had good camps for us and hasn't had this opportunity," said Keefe. "He is a good young player who has confidence with the puck. He moves it well. He has some good size to him [6-foot-2, 198 pounds] and all of that. There are things we like about him."

Kral, who was Toronto's fifth-round pick in the 2018 draft, lists Ales Hemsky, Marek Zidlicky and Tomas Kaberle as his favourite players growing up.

What are the keys for Kral against the Kings?

"Just play smart, be simple and play the team structure," he said.

Kral is looking forward to going up against his old Spokane Chiefs teammate Jaret Anderson-Dolan, who skated as Los Angeles' fourth-line centre at their practice on Friday. Kral is also eager to build chemistry with Giordano, who is Toronto's oldest player at 39.

"He's experienced so he's going to help me a lot and hopefully I'll help him too."

Keefe wanted to get Kral into one of the final two games on this trip, which wraps up on Sunday in Anaheim.

"If you are him and you are playing in your first NHL game, it is good to know in advance and come off of a practice day rather than being thrown in for a 5 p.m. game on a back-to-back," the coach explained. "With the schedule being what it has been and the length of the time on the road, we feel like we need to use some of the extra guys."

Victor Mete will be a scratch on Saturday.

Mitch Marner made it clear that Toronto's struggles aren't just on the defence.

"We're not helping our D," the winger said. "We're not coming back to pucks ... This forward group, we need to get way hungrier on the puck. We need to create way more chances up ice and help our D out a little more."

"We need them in the right spots as well," Holl agreed. "It's going to be a group effort."

Keefe is still seeking the right mix up front. At Wednesday's practice, he juggled three forward lines. At Friday's workout, all four lines had a new look.

Michael Bunting is now back with Auston Matthews and Marner. Alex Kerfoot moved to left wing with John Tavares and William Nylander. Nick Robertson slid down to the third line with Calle Jarnkrok and Wayne Simmonds, who returns after being a healthy scratch in San Jose. Nicolas Aube-Kubel will draw back in after sitting out the first three games on the trip. He skated with David Kampf and Pierre Engvall. Zach Aston-Reese and Denis Malgin will be scratches on Saturday.

Coach and captain catch up after practice wraps pic.twitter.com/9981oPZ4WV

The second line with Tavares between Robertson and Nylander had been the only one to survive Wednesday's makeover, but that trio struggled mightily in San Jose.

"Wanting to give Robertson a different look," Keefe said. "Being on the road as much as we have been, that line has been targeted in terms of matchups and having to play against other teams' best players. We are just trying to lighten the load there a little bit. At the same time, we want to capitalize on the fact that Kerfoot is coming off of a good game on the wing."

The Sharks held a 13-4 edge in shot attempts with Robertson, Tavares and Nylander on the ice in San Jose. That trio saw a steady diet of the Tomas Hertl line.

"Last night [it] was hard for our line to get that sustained pressure," Nylander said.

"We just didn't execute with the puck as much as we'd like," Tavares acknowledged. "We had a lot of matchup against probably their best offensive line and trying to be cognizant and aware of making sure we're good away from the puck especially when things maybe don't feel quite as connected and we're not executing the way we need to. So, we need to defend well and maybe simplify and get pucks in behind them and use your speed and your forecheck to try and create some turnovers and get some looks that way. Certainly, a game we can improve on for us."

Kerfoot produced a pair of assists while playing on the top line on Thursday. He generated a career-best 51 points while playing primarily with Tavares and Nylander last season.

"We've had great chemistry whenever we've played together," Nylander noted. "Whether we play together all year or just get put together for one game, I think we click right off the bat."

Keefe is also pulling some sentimental strings by playing Robertson, a native of Pasadena, Calif., with Simmonds.

"He has talked about the fact that Wayne Simmonds is one of the guys he watched and now he is on his line," Keefe said. "It is crazy how things work out sometimes. A big moment for him and his family. I know he is excited. I can see it in talking with him."

"No, he's just really young," the 34-year-old said with a chuckle. "It's cool. I guess you could feel old, but at the same time, for me, it's kind of an honour, because it's a testament. I'm still in this league. I'm still going."

The veteran may need to calm Robertson down as he plays his first homecoming game in the NHL in front of a big group of friends and family.

"I think he has given us a lot of energy and has put everything he has into every shift," Keefe said of Robertson. "We want to make sure he relaxes, plays his game and does the things he is capable of doing."

Feeling under the weather, Ilya Samsonov dressed as the backup goalie on Thursday.

"It seems like he is shaking it off," Keefe said. "It wasn't a huge deal, but it was something that going into the Vegas game was bothering him. He pushed through it. Given how much we had to rely on him in that game, in particular, we thought it made sense to give him the extra day. He will be ready tomorrow."

The Leafs brought a practice goalie on the trip, which has allowed Samsonov to get some extra rest.

Kallgren allowed four goals on 31 shots in the loss to the Sharks.

Marner and Matthews both scored on Thursday. It was the second tally of the season for both players.

"It doesn't matter," Marner said. "We didn't do enough to help this team win."

Sent out to set the tone, Toronto's top line surrendered a goal on the first shift in San Jose.

"We were creating opportunities, creating chances, but that first shift we got to be better on," Marner admitted. "We talk about our starts and we want to be better and giving up a goal right off the start isn't good enough from our line and our standards."

The Leafs have allowed the opening goal in six straight games.