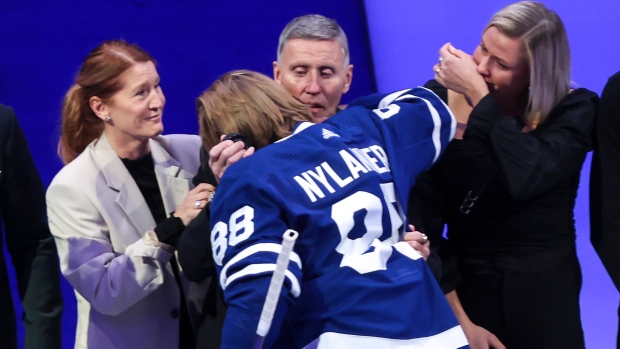 "I didn't think our meeting would be about that so it really caught me off guard," said winger William Nylander. "It's a terrible disease and at least now he's not hurting."

Salming was diagnosed with ALS earlier this year. He was 71.

The first Swedish-born player to be inducted into the Hockey Hall of Fame, Salming had a personal connection to a couple Leafs, including Nylander. The pair spent a night out together in Stockholm not too long ago.

Salming visited Toronto to take part in the annual Hall of Fame Game ceremony on Nov. 11. Darryl Sittler was by Salming's side and helped his former teammate salute the fans, who offered an extended standing ovation. The next day Salming was honoured in a pre-game ceremony, which included a video tribute detailing his incredible career.

"It's hard not to be heavy-eyed in those moments and take a step back and appreciate just how he set the standard of what it is to be a Maple Leaf," said captain John Tavares. "It was great to see that he got those moments. Special to see that, be a part of that and feel it."

Nylander took part in the ceremonial puck drop after the tribute on Nov. 12 and hugged Salming.

"It's very sad," Nylander said. "It's been hard to process. Just found out and it's very upsetting. Just saw him a few weeks [ago] and it's crazy how fast it went."

Sheldon Keefe started all six of the team's Swedish players in that Nov. 12 game against the Vancouver Canucks and used the opportunity to reflect on what it means to be a hockey player and coach in Toronto.

"Our team was really touched by Börje and his family being in Toronto, honouring him the way the organization did and sharing in the moment," the coach said. "Such an incredible competitor. For myself, I learned even more about him as a player and the impact he has made on our organization and our community in Toronto. Our players really felt that a couple of weeks ago. It hits us much harder here today. It is a difficult time to not be at home in Toronto with our fans."

Salming is the team's all-time assist leader with 620 and fourth in career points for the franchise, behind only Mats Sundin, Sittler and Dave Keon.

After Rasmus Sandin was drafted by the Leafs in 2018, Salming took him out for lunch. His father, Patric, came as well. The elder Sandin lists Salming as his hockey idol. Father and son shared some text messages after the news broke on Thursday.

"You're shocked," the 22-year-old Leafs defenceman said. "It's crazy when you think about it. What is it? A week, 10 days ago or something, he was in Toronto and to get the news today, it's crazy."

"It's very, very tough," said goalie Erik Kallgren. "Just glad that the organization had time to bring him over and really show how much the fans and organization appreciates him and how much he's meant to the Toronto Maple Leafs and hockey in general. A really, really sad day."

A progressive disease of the nervous system, ALS affects cells in the brain and spinal cord and leads to muscle control loss. Salming had recently lost the ability to speak.

"It is devastating," said Keefe. "The fact that we are so impacted here today tells you a lot about the type of person and player that he was."

Salming, who signed with the Leafs in 1973, played 16 of 17 seasons in Toronto. But his legacy goes beyond one city. He was a trail blazer.

"He led the way for a lot of Europeans to come over," Sandin stressed.

"He was a warrior," former Leaf Lanny McDonald said following the ceremony on Nov. 11. "I have always looked at Börje as probably one of the top five, six defencemen of all-time. He could do it all. He was fearless. Every North American player looks up to him and every other player outside of North America should actually be giving Börje a royalty cheque."

It's fitting, Nylander noted, that Pontus Holmberg, the latest Swede to crack the Leafs lineup, scored his first NHL goal, the game winner, on Wednesday night.

"It's very special for him to score that last goal there before [Salming] passed," Nylander said.