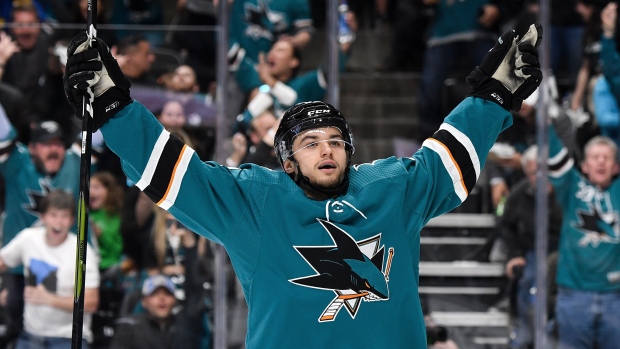 Eleven years ago, Colorado Avalanche defenceman Jeff Finger signed a four-year, $14-million deal with the Toronto Maple Leafs. The contract was, in one word, unbelievable. It spurred a number of theories, the most popular of which was that then Leafs GM Cliff Fletcher confused Finger – who had played just 94 NHL games and was a frequent healthy scratch in the preceding postseason – with Kurt Sauer.

We have seen plenty of puzzling contracts since the Finger signing, but most of them have been in the ‘extreme overpay’ category where teams simply misevaluated the talent or potential of a given player. David Clarkson, Ville Leino and most of the summer of 2016 UFA class are solid examples of those kinds of misses. In a hypercompetitive league where every team is trying to outbid 30 other competitors, these misses – massive as they are – will happen. And they will continue to happen, even with front offices getting better about how to allocate financial resources in a salary cap league.

That brings us to Monday evening and the announcement that Kevin Labanc had reached a one-year, $1-million deal with the San Jose Sharks. My first thought was that it had to be a mistake. My second thought was that San Jose general manager Doug Wilson had further solidified himself as the best in the business. My third thought was that, no, surely a mistake had been made.

It was just a few weeks ago I wrote that Labanc was a very desirable offer sheet candidate. As an established middle-six forward sitting in the middle tier of the offer sheet compensation range, he seemed the exact type of target for building teams to add depth through restricted free agency.

Just how good was Labanc’s 2018-19 from a scoring perspective? He finished the year as San Jose’s sixth-most-productive forward and 79th in scoring league wide. On the counting numbers, he finished ahead of Philadelphia’s Kevin Hayes (who signed a seven-year, $50-million contract as a UFA this summer), Dallas’ Jamie Benn, Long Island’s Brock Nelson, Montreal’s Brendan Gallagher and Winnipeg’s Patrik Laine. His rate scoring at even strength was equivalent to Dallas’ Tyler Seguin and Philadelphia’s Travis Konecny.

Now, points aren’t everything. Far from it. But points are consistently the best predictor of future contracts for forwards, mostly because they are repeatable and indicative of individual scoring talent. That’s why most modellers can predict both term and AAV for forwards within a reasonable degree of error. Regardless of where you look (like here, as one quick example), most projections had Labanc at somewhere around three years and $3-million to $4-million AAV. 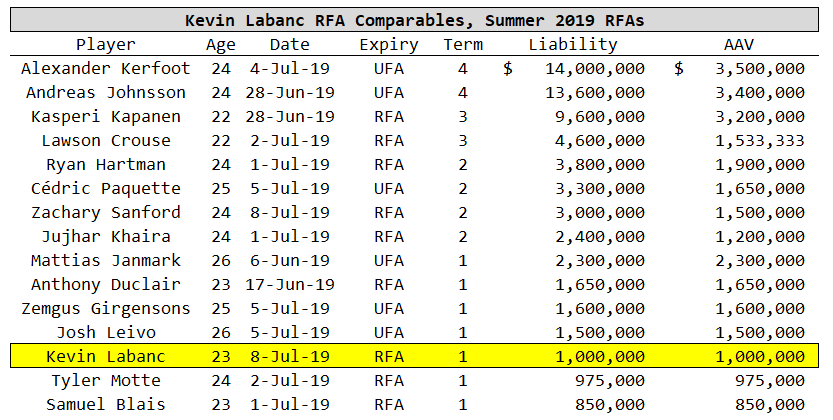 Labanc’s contract pales in comparison to just about every comparable RFA in his class. One of the puzzling things about his contract is that it really didn’t accomplish much of anything. He took the lowest term possible. He took close to the lowest AAV possible, just $200,000 more than his qualifying offer. At the end of his contract, he will still be restricted, unlike most of the other RFAs in his class. So yes, Labanc’s contract seems strikingly team friendly, though he will achieve arbitration eligibility at the end of this deal – something he didn’t have this summer.

The contract is team friendly before you incorporate any sort of statistical analysis. As I mentioned earlier, Labanc is a player with a fairly comprehensive resume for a 23-year-old. In fact, his statistical resume outshines virtually every other player on this list – and that’s true whether you use point totals (which historically predict future contracts) or more advanced measures like Wins Above Replacement, which do a much better job of capturing a player’s overarching value.

Let’s take the same list of Labanc’s 15 comparables and study them over a two-year horizon. Here’s what that looks like: 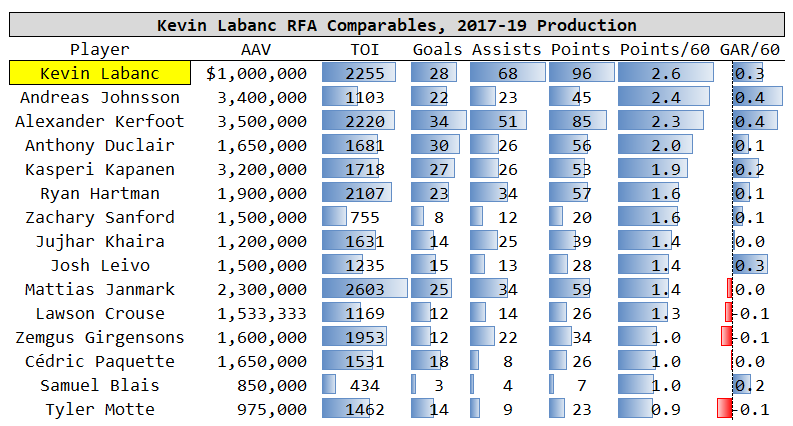 Labanc is one of the lowest paid players in his class, but his statistical resume suggests he’s comfortably been one of the most productive. In fact, his only comparables on this table would include Andreas Johnsson and Alex Kerfoot. It becomes more obvious when you look at how these players rank relative to one another based on their 2017-19 production:

Labanc’s scoring rates are second to no one here, and when you capture all of his individual contributions across all game states with context (like quality of teammates, as one example) applied, he still grades out very favourably. Evolving Hockey has Labanc as adding 0.3 goals to his team for every 60 minutes of hockey played across all game states, which extrapolated over a full season, makes him worth about a full win in the standings per season. Comparables there, again over the 2017-19 window, would include names like Jonathan Toews and Mike Hoffman.

While usage rates, scoring rates, and measures as advanced as Goals Above Replacement range in complexity, they are all rather correlated with where each player’s AAV came in at upon extension. For example, in this subset of players, each incremental goal was worth about $74,000 on the AAV. With a simple regression, we would expect Labanc’s 28 goals to have been worth about $2.7-million AAV – about $1.7-million more than what he signed for, and that’s before getting into any other measures or other contract components, like term or signing bonus money. It is, in one word, confounding.

Playing devil’s advocate, how could we explain how Labanc ended up here? One theory is that Labanc loves playing in San Jose and, with the Sharks’ cap situation fairly dire right now, took a ‘prove it’ contract to cash in next year.

That seems inordinately risky though. Labanc didn’t get term, didn’t get the money, isn’t eligible for performance bonuses and is still restricted at year’s end. Add that to a resume that really blows away most of his peers and you have a rather unbelievable contract.

For Labanc, he’ll have to prove his worth again in 2019-20. For Wilson, this contract looks like an all-time coup.