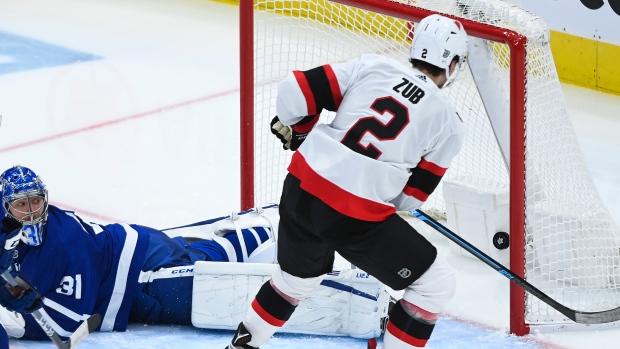 He has just 56 games of National Hockey League experience, but Ottawa Senators defenceman Artem Zub is starting to look like one of the best diamond-in-the-rough finds in recent years.

Pierre Dorion signed Zub – a 26-year-old undrafted defenceman – to a one-year deal last season, taking a chance on the player after his breakout 2019-20 season with SKA Saint Petersburg in the KHL.

Zub played 47 games on his entry-level contract, and quite frankly was one of the few bright spots on an otherwise poor Senators team. A combination of skill and poise, Zub introduced some credibility to a blueline that has been gutted during the team’s lengthy rebuild.

Dorion doubled down early on Zub, betting that last year’s stretch of impressive games wasn’t a fluke. Although no one is going to make sweeping conclusions over a player in the early stages of his second season, Dorion’s bet looks like it’s paying off again.

Paired with minute-muncher Thomas Chabot, the Senators have been able to form one of the best defensive pairings in the National Hockey League.

Zub’s performance has made him a favourite of sorts for head coach D.J. Smith – if you use deployment as a barometer for how a coach feels about a player, it’s safe to say he loves what the Russian defender is bringing in all three zones: 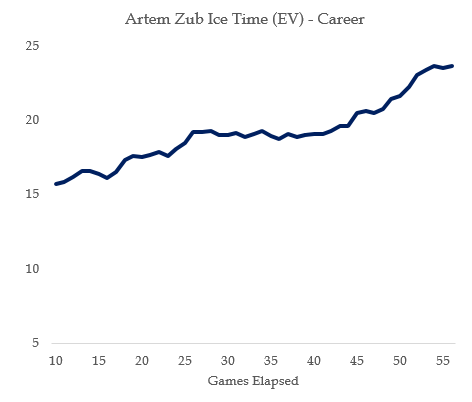 Zub is averaging about 22 minutes a night this season, which puts him top 10 in the league. Some of this is because the rest of the Senators defensive pairings are, to be kind, a work in progress. But when you are sandwiched between names like Brent Burns, Alex Pietrangelo, Roman Josi, and Jeff Petry, it’s not entirely by mistake.

It’s also worth noting that Zub is four goals and three expected goals better than the opposition this season on a team that’s minus six goals and minus two expected goals, respectively.

Ottawa has a reason to force-feed this pairing the minutes they’re earning, and it’s not just because of concerns with the second and third-pair. If you compare the Zub and Chabot pairing to other great defensive duos around the league, you see they stack up incredibly well: 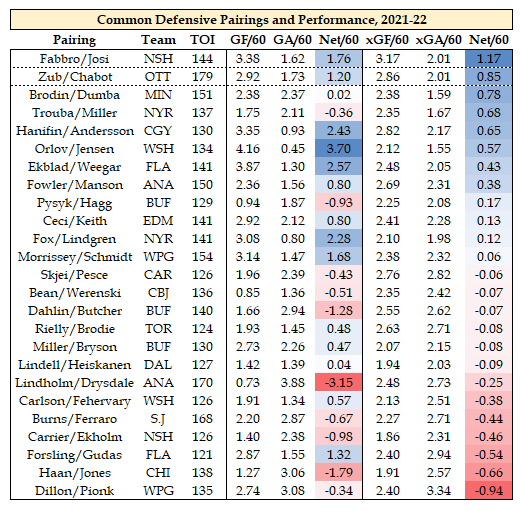 Over just a couple hundred of minutes, rate-goal scoring will experience high rates of volatility – either through wild swings in shooting percentage, or save percentage, or a combination of the two. Expected goals allow us to focus on three key components:

- How the pairings are driving play and creating territorial advantages.

- The volume and lethality of the shots generated in the offensive zone.

- The volume and lethality of the shots generated in the defensive zone.

Through the first month of the season, only the Josi and Dante Fabbro pairing in Nashville has been able to post better expected goal numbers. More telling are the pairings who are trailing in performance – pairings ripe with household names and who carry reputations as some of the best in the business.

For Ottawa, it’s a beautiful help-us-help-you situation. The Senators struggled for years finding a quality partner for the Norris Trophy-winning Erik Karlsson, finally landing on a complementary defensive player in Marc Methot. The Senators have similarly struggled finding an option for their de facto Karlsson replacement in Chabot.

Zub is starting to look like the answer. But calling him a complementary player may be understating just how good he has been for the team over his first two seasons. And if the Senators have walked into a bona fide top-end pairing, they have answered one of the most critical questions this multi-year rebuild posed.