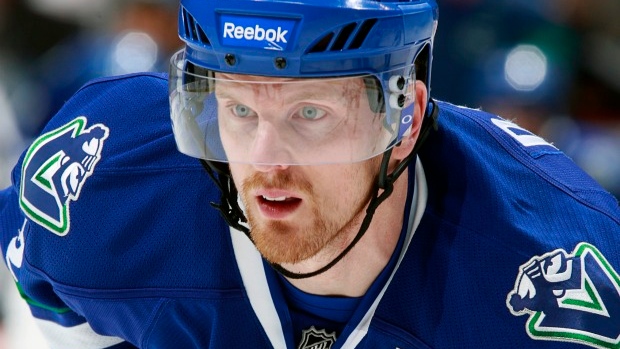 VANCOUVER – It’s the most exclusive club the Vancouver Canucks have and, on Sunday night, it will get just its third member.

When Daniel Sedin suits up against the Chicago Blackhawks at Rogers Arena, he will join his brother, Henrik, and Trevor Linden as the only players in the 44-year history of the franchise to wear Canucks colours for 1,000 National Hockey League games.

Stan Smyl, Markus Naslund and Pavel Bure have all had their jersey numbers retired by the organization, but none of them reached the thousand-game milestone. Linden leads the way having played 1,140 of his NHL games for the Canucks, while Henrik Sedin (1030) suited up for his 1000th contest on March 12 in Winnipeg. Now it’s Daniel’s turn – a shade over 14 years after his NHL debut in Philadelphia on October 5, 2000.

“It was a long time ago,” Sedin says with a laugh. “I remember being nervous, for sure. There were a lot of expectations on us - from ourselves and from the outside, too. And playing in Philly with their big guys, it was nerve-wracking.”

Some of those nerves were soothed two games later when Daniel found his goal-scoring touch for the first time in the NHL beating then Tampa netminder – and future teammate -- Dan Cloutier. And yes, that first goal was set up by Henrik.

Fast forward to the present day and Daniel needed a moment or two to reflect on how he’s gone from fresh-faced 20-year-old rookie finding his way in the NHL to a 34-year-old veteran of so many battles. He’s quick to point out that it wasn’t always easy, but the low points have helped him appreciate all of the success he has experienced through the seasons.

“You can kind of separate them,” he says when asked if it’s all gone by quickly. “The first 300 games were pretty tough. It wasn’t very fun. We liked playing hockey, but it was tough with all the media attention and we didn’t play well, either. Those games were certainly tough. And then things started to get better and better. It got easier playing games and coming to practice because things were going well. Time flies when you win games and you’re having fun, but it certainly goes slower when you’re losing games and not having as much fun.”

After an off-season last year, Daniel Sedin seems to have recaptured the fun of the game in the early going this season with 20 points in his first 20 games. He enters Sunday’s spectacle game with 311 goals and 825 points to his name. It’s a body of work that includes an Art Ross Trophy, a Ted Lindsay Award, two All-Star Game appearances, as well as an Olympic gold medal (2006) and a World Championship (2013). For all of the accomplishments accrued over a decade and a half in the NHL, however, Daniel Sedin is well aware of the one glaring omission on his hockey resume.

“We’re missing the big one,” he says. “Hopefully, that’s something we can get back to playing for. That would be unbelievable. As a player, everyone looks at whether you’ve won the Stanley Cup. That’s the one thing we’re still looking for.”

That pursuit will continue for both Daniel and Henrik Sedin. They can’t win the Cup on Sunday night, but the game with Chicago is bound to conjure up memories of many of the fiercest battles the twins have been involved in during their years in the NHL and this time, they get to mark the thousand-game milestone together, something that didn’t happen when Henrik crossed that threshold. Daniel was out of the line-up with a leg injury and unable to take part in his brother’s big night, but this time, they’ll both be in uniform allowing Henrik to share in his brother’s accomplishment.

And really, Sunday should be a terrific night for everyone in attendance at Rogers Arena. Fans here on the West Coast have witnessed the Sedins do so many good things over their years in Canucks uniforms. Seeing Daniel stand alongside Henrik to make up two-thirds of the most exclusive club the franchise has simply cements the Sedins' iconic status in the organization and adds to their very special place in Vancouver Canucks history.