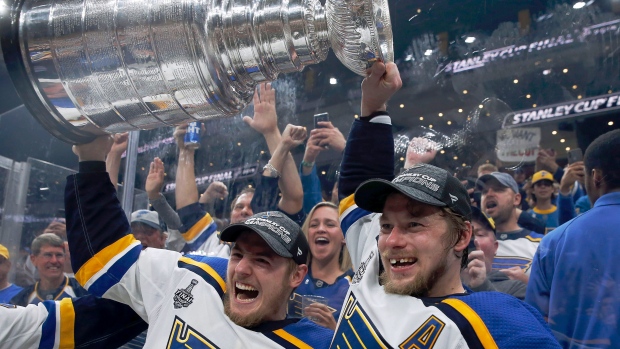 With the Stanley Cup Final in the books, I wanted to use one last piece to praise the front office of the St. Louis Blues.

We see overperforming and underperforming teams every NHL season. That’s the nature of the beast with what the NHL is today – a hypercompetitive, yet highly random league where win-loss records in smaller samples aren’t always indicative of team talent. One of my favourite niche pieces ever from Phil Birnbaum showed how long – 73 games! – it takes for talent to overwhelm luck or randomness in the NHL standings. Contrast that with the NBA, which needs only 14 games.

There are a multitude of reasons for this (low-scoring games, standings points allocation and the incentive to play for overtime, et al.), but at the end of the day, the win-loss column is what front offices tend to consider when shaping their short and long-range strategies. The Blues’ story has been exhausted at this point: from worst to first, keyed by an unbelievable run from mid-January through the Stanley Cup final.

The Blues, like many other teams in the past, could have easily made the decision to sell off some of their premium assets and take another run at it next season. They had already fired their head coach, handed the goaltending keys off to a rookie and were staring up at the entire Western Conference. Heck, I spent a day writing about Brayden Schenn as a serious trade deadline target for other competitors – a classic ‘buy low’ candidate, who, like most of the team, was playing much better than results indicated.

Schenn wasn’t the only St. Louis player in that boat. The Blues may not have been the same team in November as they were in May, but the gap wasn’t nearly as large as the standings would indicate. The Blues were victimized by bad bounces, poor puck luck and inconsistent goaltending. Binnington crossed off the goaltending issue, which was a big and unanticipated surprise. The rest was mostly mean reversion.

If we look at expected goal rates and actual goal rates over the full NHL season, you can see that the Blues were playing far better than the actual goal numbers would indicate. Whether or not the front office knew this or stumbled into their trade deadline non-decisions by chance, betting on this team to improve was the right play. 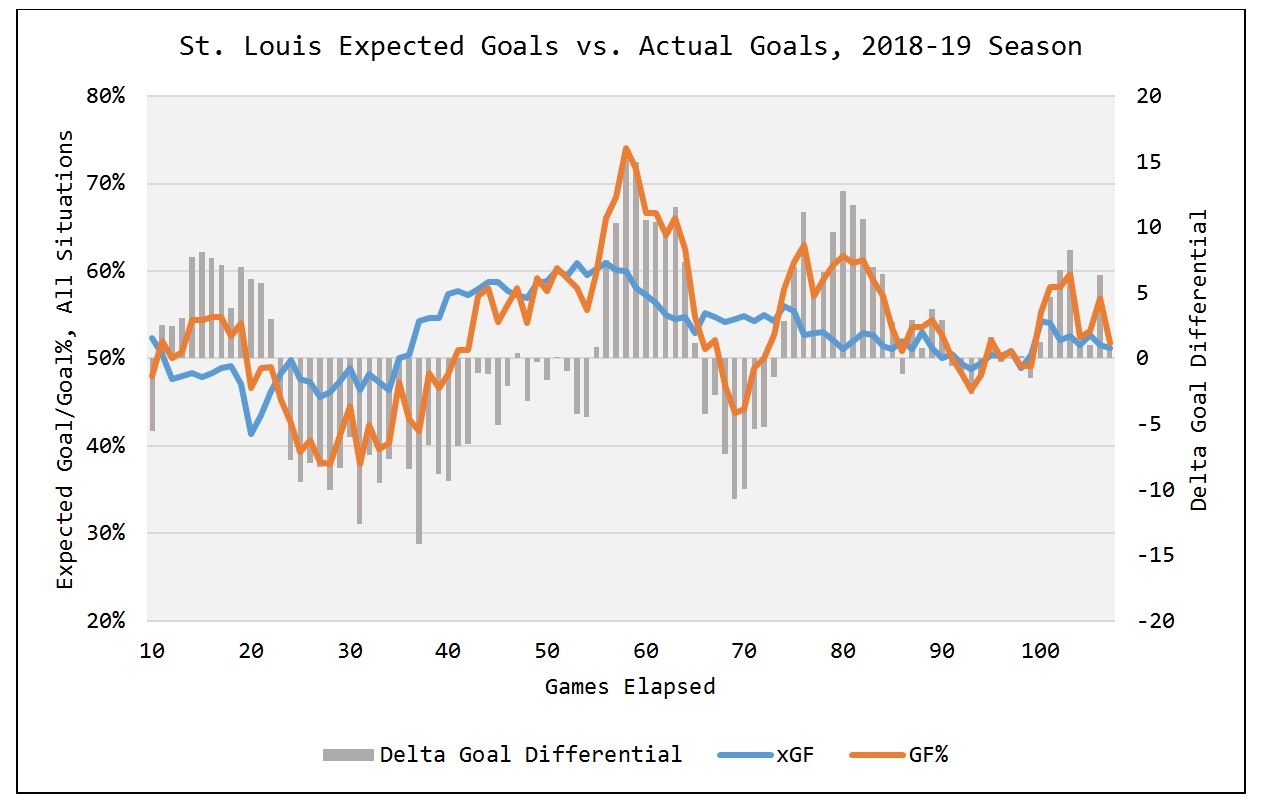 From game 10 through game 50 of the regular season, the Blues ran a goal deficit, where expected goal differential – which considers both shot volume and shot quality – exceeded actual goal differential. For stretches of November and December, the Blues were as many as 10 to 15 goals worse in the standings than we would have expected based on their run of play.

That’s a considerable stretch of poor luck. Perhaps doubly so when you realize that the Blues were basically better than 50 per cent in expected goals over the entire season – a strong indicator of a playoff-calibre club. Compare that with where the Blues were on Jan. 3 – a team pacing for a 78-point season – and you start to realize how frequently the standings can lie.

This is why it is so critical to look deeper than what the standings indicate when we are talking about forward-looking analysis and forecasting. Could anyone have anticipated this Stanley Cup run? Other than this guy, probably not. But everyone, including general manager Doug Armstrong, should have remained bullish on this team.

That’s quite easy for me to say retroactively. It’s another story for Armstrong, the man who bet on his roster when everything was looking dire. Yet even Armstrong benefited from a stroke of luck – St. Louis’ could have started their run in February as opposed to January and, in that light, perhaps the Blues would have sold off some of their more valuable commodities.

But that’s the beauty of the sport. There is a tremendous amount of talent and an equal amount of unpredictability. The teams that have a strong grasp of their strengths and weaknesses will always be better situated to make critical short and long-term decisions, though, and the Blues deserve a ton of credit for sticking to their guns. They did, and now they are Stanley Cup champions.

Now, bring on the off-season!