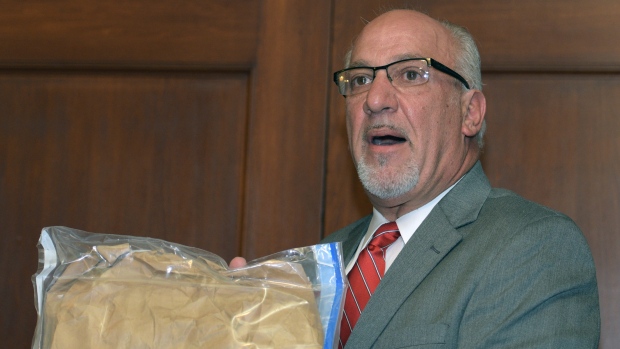 Today’s developments in the alleged sexual assault case against Patrick Kane were nothing short of shocking and unprecedented. In a press conference held at his law firm, the complainant’s lawyer, Thomas Eoannou, alleged that the rape kit had been tampered with and left on the doorstep of the complainant’s mother's home. Eoannou confirmed that the rape kit had been authenticated as belonging to his client.

The Hamburg Police Department has denied the claims made by Eoannou. It released a statement on Facebook that, in part, provided that it has “documentation that unequivocally demonstrates that its handling of the evidence and the integrity of its chain of custody of evidence in this case is unassailable.”

Erie County police have also denied any wrongdoing, stating that all evidence given to it by Hamburg Police “is accounted for and remains in its original packaging in the possession of Erie County Central Police Services” and that this includes “the evidence in the rape kit and the packaging itself”.

In light of these contrary positions, this story remains fluid to say the least. That being said, the allegations being made by Eoannou, if true, are very serious.

What is a Rape Kit?

A rape kit (or sexual assault evidence collection kit) is used by medical professionals for gathering and preserving physical evidence following an allegation of sexual assault. The kits were developed to satisfy legal requirements in the collection and preservation of evidence. The kit includes things like swabs for collecting fluids from the lips, cheeks, thighs and vagina, a comb to collect hair samples and a nail pick to isolate and collect debris from under the nails, such as skin from the alleged perpetrator which may have been left behind following a struggle.

Remember, DNA evidence isn’t just restricted to the crime scene. It may also be collected from an alleged victim’s body, clothes and other personal belongings.

Tampering & Admissibility of the Rape Kit

Rape kits can be critically important in sexual assault investigations. In cases where there are no witnesses to an alleged assault, the rape kit can be a key piece of evidence, together with the testimony of the complainant.

The integrity of the chain of custody will be examined with a view to determining if the evidence was improperly handled. If it was, then it may well be deemed compromised and declared inadmissible. The evidence needs to be preserved and untainted, which may no longer be the case.

Paul Cambria, Kane’s lawyer, has stated that the results of the rape kit exonerate his client as they “clearly eliminate Patrick Kane as a contributor of DNA." Cambria also said that a compromised rape kit is disadvantageous to Kane as he would be “deprived of the opportunity to independently test it and determine if there was even more favourable evidence” vindicating the hockey player.

This may be true, but on the other hand, an inadmissible rape kit will likely result in this being a more difficult case for the complainant. Of course, much depends on the findings. Still, it could be fatal to her case. So both sides have reason to be disappointed with the possible tampering of the rape kit.