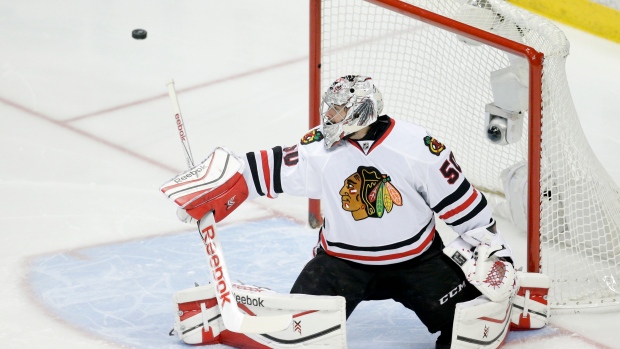 Each night during the Stanley Cup Playoffs, former NHL goaltender Jamie McLennan provides his Post 2 Post rankings for every goaltender in action. Each goaltender will receive a score out of five based on their performance.

Frederik Andersen - 5 - Andersen make a good save just 30 seconds into the game on Jonathan Toews. For the first goal, it was a nice tip by Andrew Shaw in front on the power play, while the second goal hit Bryan Bickell's leg and redirected, also on the man advantage. He made huge saves early in the second on Marcus Kruger and Niklas Hjalmarsson, as well as an outstanding glove save on the 5-on-3 on Patrick Kane. Andersen came up with a good save on Marian Hossa early in overtime and made it look easy with an outstanding blocker save on Patrick Sharp and a great save on Antoine Vermette with a good push and readjustment. Later, a glove save on Kane was a bullet and Andersen snagged it by his ear. In the second overtime period, Andersen made a trio of great stops with a huge save on Shaw early, a left-shoulder save on Bickell and then a left-pad save on Vermette. He made a good post play on Kane in triple overtime and followed it up with a great glove save on Teuvo Teravainen. The game-winning goal was a lucky bounce right to Kruger and not Andersen's fault. Tuesday night was a great goalie battle.

Corey Crawford - 5 - He was solid early on with his rebounds. Crawford had no chance on Andrew Cogliano's goal, as it directed off two players before it going in. He made a good positional save on Ryan Kesler early in second with no rebound and followed it up with a big right-pad save on Emerson Etem and an outstanding save on Jiri Sekac. The Corey Perry goal was a perfect tip. Crawford showed good work in the first overtime with stops on Perry, Rickard Rackell and Sami Vatanen. He shone on the penalty kill. There was good crease work early in double OT with a massive right-pad save on Etem and an even better save on Perry with the glove from right in the slot. Crawford made another fine glove save early in triple overtime on Patrick Maroon, before solid positioning led to a stop on Kyle Palmeri's turnaround shot. Just a brilliant game!