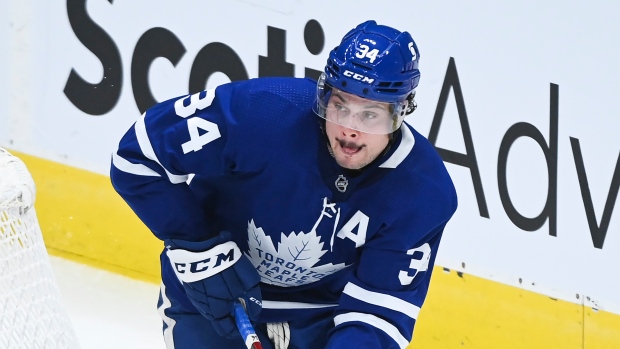 ​TSN Toronto Reporter Mark Masters reports on the Maple Leafs, who practised at the Ford Performance Centre on Tuesday before travelling to Montreal for Wednesday night’s game against the Canadiens.

Auston Matthews finished 10th in Hart Trophy voting last season. The Leafs centre is on track to play a more prominent role in the most-valuable-player discussion this year.

Matthews has scored in eight straight games he's played in and leads the National Hockey League in goals with ​11.

"He's playing two-way hockey," Spezza observed. "He's up and down the ice. He controls the play and is scoring big goals for us at big times."

The latest timely tally came in the third period on Monday against the Vancouver Canucks when Matthews blasted a one timer along the ice and past a bewildered Braden Holtby. It was his fifth game-winning goal of the season, which also leads the league. It allowed the Leafs to earn two points on a night when they weren't at their best.

Matthews, who described the win as "ugly," appeared to be frustrated in the second period with the Lady Byng Trophy nominee taking his first penalty of the season. But when it mattered most, Matthews stepped up.

"He held his composure," Spezza revealed. "He spoke up a little bit in the room. He's growing in his confidence as a leader."

"He's playing some excellent hockey," Canadiens goalie Carey Price told reporters in Montreal. "His game speaks for itself. He's a powerhouse guy and he's got an amazing shot ... It's fun to watch him play out there when I'm not on the ice with him."

Matthews is an imposing figure at 6-foot-3, but hasn't always been the most physical player. However, this season he's landing more bodychecks than ever before. He led Toronto with four hits on Monday.

"It's tough enough playing against forwards of his calibre," said Leafs defenceman Travis Dermott, "but when they start hitting and doing stuff that makes your life even harder then it steps to a different level so it's great to see that coming out of Matty. I'm sure he'll keep it going and have a few more tricks up his sleeve as well."

Matthews is at 4.3 hits per 60 minutes so far this year, which is way up from 1.6 last season. The Arizona native always owned a howitzer of a shot, but is now consistently praised by teammates for his attention to detail defensively.

"He gets in people's way," said Mitch Marner. "He's doing better defensive-wise getting the puck back in our own zone."

This is the first season Matthews and Marner have started on the same line from Day 1 of training camp.

"You're seeing their chemistry really evolve," said Spezza. "They're learning to find each other in the soft spots of the rink. They're two very different players, but they think the game on the same level so they complement each other really well and our team is benefiting from them reading off each other. We're really seeing, even in practice, that their chemistry is better and better."

The Matthews-Marner magic was certainly evident on Monday. The game-winning goal came moments after an offensive zone faceoff, which Matthews won. It was a play they clearly had in mind before the puck dropped.

"Mitch just came up to me and said, 'Look for me,' so that's what I did and then he did the rest with Auston," said defenceman Rasmus Sandin who picked up a secondary assist on the play. "It wasn't too hard."

Marner has now picked up a point in eight straight games.

"I just try to pop open for him," Matthews said. “[Zach Hyman] had a really great screen there and I just tried to shoot it as hard as I can. Sandy made a quick play in and out, it just happened really quick.​"

Matthews and Marner were also on the ice for Toronto's first goal. Marner controlled the play high in the Canucks zone before getting the puck to the net and forcing Nate Schmidt into an awkward situation. The defenceman, who was battling with Hyman, tried to kick the puck away, but instead put it right into the wheelhouse of Morgan Rielly who made no mistake.

"With the structure we have in the offensive zone, it allows for a lot of movement, a lot of opportunity for players to use their skills and move to different spots," said coach Sheldon Keefe. "There's nothing really set in terms of where people should be in our structure. It's a matter of motion and movement and placing people and, you look at last night as an example, it's not exactly something you would practice, but it's well within the structure and things we talk about."

Keefe has designed a system that allows his high-end players like Matthews and Marner to freelance in the offensive zone.

"The key is to allow their instincts to take over," he said. "That's a part of who they are and that's why you want to have players like that so you need to give them that freedom."

After missing the last two games, Dermott skated on the third pair with Zach Bogosian at practice.

"Just a really fun charley horse," a smiling Dermott said of his injury. "It's a little more nagging than you expect it to be when it's just, technically, a bruise, but the boys here have been great helping me get it figured out, get it loose and getting me back pretty quick. I feel pretty good now and just waiting to get in the lineup."

This collision with Motte is what sent Dermott off pic.twitter.com/n70ZWzWY94

Dermott sustained the injury last Thursday when he attempted to avoid a hit by Canucks forward Tyler Motte.

"I tried to kind of get out of the way and I left my leg too late behind me," Dermott said. "I don't think it was a dirty hit by any means and I take the onus on me for being too slow."

"Everything's situational and it's usually an accumulation of things," Keefe said. "You don't overreact to one incident or one different thing. For me, it's usually the end of a long line of events that have occurred with a lot of communication and discussion. It's not something I resort to all that often."

Keefe acknowledged dealing with a star player is a bit different when it comes to this kind of disciplinary action. A top-line player may miss a shift or two while a depth guy could find himself out of the lineup entirely moving forward.

"Sometimes an in-game benching, while you're sending a message to a certain player, it can also work against the team and your ability to win a certain game so there's a balance there as well,"​ Keefe said.

Keefe played for Tortorella when he broke into the NHL with the Tampa Bay Lightning in 2000 and learned a lot from his time around the veteran bench boss.

"Knowing Torts it would have been lots behind the scenes that would've led to such a decision," Keefe said. "It wouldn't have been anything abrupt. He's very purposeful with how he goes about things."

Toronto got outshot 27-7 in the first two periods on Monday, but Frederik Andersen held the fort. Although after the game the Dane was more interested in praising his teammates than basking in his first-star performance.

"I'm really proud of how they stuck with it in those two periods and didn't start cheating for offence or anything like that," Andersen said. "They kept being inside, trying to take away time and space and not giving up their defensive commitment to force something."

Keefe felt like the Leafs did a decent job keeping the Canucks to the outside despite all the shots. Still, Andersen needed to make some big saves, including robbing Justin Bailey on a two-on-one rush late in the first period.

After allowing nine goals in the first two games, Andersen is rolling. He's got a .919 save percentage in his last nine starts.

When Andersen is at his best, what's he doing?

"Keeping things simple," he said. "Small movements and easy tracking. Just being ready, reading the play well and keeping the focus on that one-shot-at-a-time mentality. Obviously, it's a little bit more complicated than that, but just being on top of the puck and seeing it well is the key to my game to make it look easy. When I play my best it looks easier than at other times. I think that's the main key."