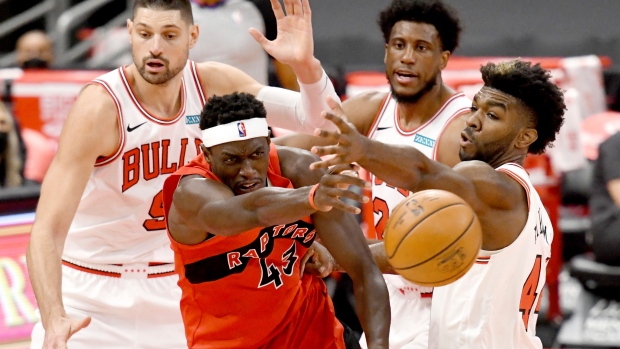 TORONTO – What else could go wrong?

It’s a question that Nick Nurse has asked himself on more than a few occasions over the course of his team’s truly exasperating season, especially in recent weeks. But even for someone that’s seen just about everything in his three decades of coaching the game at just about every level around the world, the answer continues to amaze.

“I'm not sure it could get any funkier this year than it's gotten,” Nurse said ahead of a crucial Thursday night meeting between his 11th-place Toronto Raptors and the team they’re chasing in the Eastern Conference standings, the Chicago Bulls. “I mean when you think, come on, there's just nothing else that can happen here, something else comes up.”

They’ve dealt with a temporary relocation, a COVID-19 outbreak that swept through the organization, a multitude of injuries, and a series of heartbreaking and hard-luck losses. Their latest setback; an ill-timed pair of one-game suspensions handed down by the league for the aftermath of that bizarre on-court altercation in Tuesday’s loss to Lakers.

So, going into a game that they needed to win to stay in the hunt for a playoff spot, the Raptors were missing seven players – five to injury (Fred VanVleet, Kyle Lowry, Rodney Hood, Patrick McCaw and Jalen Harris), one in the health and safety protocols (Paul Watson Jr.), and now another due to suspension (DeAndre’ Bembry).

That this game was initially scheduled to be played in late February – postponed when Toronto couldn’t dress the minimum required eight players on account of positive tests and ongoing contact tracing – seems fitting. This time, they just barely met that requirement.

To their credit, the eight Raptors that were available did what they could. They scrapped and clawed and hung around long enough to make things at least mildly uncomfortable for Chicago down the stretch. But while the effort was laudable, they were simply overmatched.

Chris Boucher had a career night, pouring in 38 points and grabbing 19 rebounds – he was just one board shy of posting the first 30-20 game in franchise history – and Pascal Siakam was dominant, scoring 27 points of his own. However, those two accounted for 58 per cent of the team’s offence. The Bulls had seven players score in double figures. Toronto had three.

“I think they hung in,” Nurse said after the 122-113 loss. “[It] got away from us there for a bit and we battled all the way back to [give ourselves] a chance actually. We were getting stop after stop after stop, [the deficit was] down to seven [points], and with a couple three balls that didn't go on we could have got a really made it interesting there. But, yeah, I mean it's unfortunate, the schedule and the injuries and suspensions and COVID and all that stuff [are] not great timing for this game of this magnitude.”

Even at the best of times, this is a team that’s lacking in depth. Playing undermanned – especially without their veteran point guards – has seemed like an impossible challenge. Lowry’s missed six of the past seven contests with a lingering foot infection, while a hip injury has sidelined VanVleet for three straight.

Rookie Malachi Flynn made his first NBA start on Thursday, but he and fellow 22-year-old guard Gary Trent Jr., who both helped spark the two-game winning streak earlier in the week, combined for just 15 points on 5-of-25 shooting.

The Raptors hope to have at least a few more bodies in uniform for this weekend’s back-to-back set in Cleveland and New York. Lowry is eight days into an absence that was initially supposed to be seven-to-ten days, though there hasn’t been an update on his status. VanVleet’s injury isn’t believed to be serious, but he’ll have to serve his one-game suspension – levied for leaving the bench area during the incident between OG Anunoby and Lakers guard Dennis Schroder on Tuesday – whenever he’s deemed healthy enough to play. Bembry will be back on Saturday, and Watson is progressing through the protocols and could be cleared to re-join the club soon.

They’re also preparing to add a couple of big men – G League standout Freddie Gillespie, who they signed to a 10-day contract just ahead of Thursday’s game, and Canadian Khem Birch, who was recently released by the Magic and is expected to end up with Toronto once he clears waivers on Saturday afternoon.

Although you’re not going to find a saviour on the buyout market, and Birch doesn’t solve their long-standing issues at the centre position, he should help address a glaring need.

It’s a good fit, for both player and team. With Orlando committing to the youth movement and looking to clear playing time for their young centres, Mo Bamba and recently acquired Wendell Carter Jr., the 28-year-old Birch became expendable. He’ll have an opportunity to step in and immediately earn significant minutes in Toronto’s depleted frontcourt, showcasing himself ahead of unrestricted free agency this summer.

Meanwhile, the Raptors are last in the NBA in rebounding and have fallen from the league’s second-ranked defensive team a year ago to 18th this season. The Montreal native isn’t going to put up big numbers, but he brings some size, toughness and defensive savvy to a club that desperately needs it. Birch is the centre they could have used a couple months ago.

So, help is on the way, but it may be too late. With Thursday’s loss, the Raptors’ hopes of squeezing into the playoffs via the play-in tournament took a serious, if not insurmountable, hit. Chicago has taken a three-game lead on Toronto for the 10th seed and final play-in spot, and also owns the head-to-head tiebreaker.

After adding an all-star in Nikola Vucevic at the trade deadline, the Bulls are starting to look the part, having won three games in a row. Assuming they continue at their current pace (.440) or better – which seems like a good bet, given their remaining schedule – the Raptors would need to go roughly 13-7 over their final 20 games to have a chance at passing them.

It’s not impossible, but nothing we’ve seen from them over the past couple months suggest that it’s likely, not to mention their injury concerns and the tough schedule that lies ahead.

For a team that was hoping it could get healthy and get hot at the right time – and still is, to some degree – this is another punch to the gut in a season that’s been full of them. Nurse isn’t going to stop coaching and the Raptors won’t stop playing. What they’re playing for has changed, though.

“Your choices are to be positive or to be negative, and I would hardly ever be negative,” Nurse said prior to the loss. “There's some way to try to win a game. There's some way to try to figure out how to win it. You may go get your doors blown off, but I don't think I would ever go into the game letting those thoughts creep into my head. You believe in the guys you got, you get excited for the guys that have an opportunity, more of an opportunity, more minutes, and see what they can do.”​