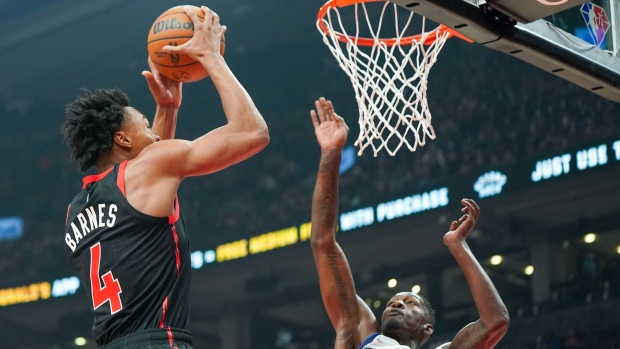 TORONTO – Nobody said life in the NBA was going to be easy.

Less than 24 hours after getting the Jayson Tatum assignment in Boston, Raptors’ rookie forward Scottie Barnes started Saturday’s game as the primary defender on Mavericks superstar Luka Doncic. Welcome to the pros, kid.

“I have young legs so it’s not going to affect me,” Barnes said after the opening half of his first back-to-back, his coming out party in Toronto’s 115-83 road win over the Celtics on Friday.

Barnes was electric, showing off his full two-way arsenal en route to his first career double-double, 25 points and 13 rebounds in 35 minutes of action. It wasn’t a perfect outing, but it was as close to perfect as it gets for a 20-year-old playing in his second NBA contest. But how would he follow it up?

Saturday’s game presented a few new challenges. An unforgiving whistle meant he would spend most of the night in foul trouble, and after a slow start, Doncic came on strong in the second half, lifting the Mavs to a 103-95 comeback win and handing Toronto its second loss in three games to start the season.

But once again, Barnes was a bright spot. Early on, he used a hesitation dribble to blow past Canadian Dwight Powell on a drive to the rim. He knocked down a baseline jumper on a broken possession to open the third quarter, then dropped in a baby hook shot over Doncic, reminiscent of his first NBA bucket against Washington on Wednesday.

He was at his best in the fourth quarter, as the Raptors made one final push. Continuing to attack Doncic off the dribble, Barnes drove by him for an uncontested two-handed slam-dunk with three minutes left. A few minutes later, he took the all-star into the post, banked in a tough scoop shot and drew the foul.

The Raptors mustered just 44 points in the second half, as their offence stalled with OG Anunoby also saddled with fouls, but Barnes was an unexpected spark plug. He scored 10 of his team’s 23 points in the fourth, finishing with 17 points to go along with eight rebounds in nearly 30 minutes of work. He shot 6-of-12 from the field and hit five of his seven free throw attempts on the night.

“I’m a big player, I’m pretty strong for my size, I feel like I have the ability to be able to get to the rim and torch defences,” said Barnes. “I would say I’m totally capable of doing that.”

Barnes couldn’t have landed with a better organization for his short and long-term development as an NBA player.

With the body of a big, athletic wing and the playmaking ability of a guard, Barnes is one of the most unique prospects to enter the league in recent memory. He’s got the length, raw talent and ball skills to play and guard every position on the floor.

In his lone season with Florida State, head coach Leonard Hamilton put the ball in his hands and entrusted him to run the point off the bench. It unlocked something in Barnes, but it also made him one of the great unknowns of this draft class. His playing time was limited as a reserve, he only attempted 40 threes during his freshman campaign, and he was learning a new position on the fly. Still, he showed flashes of a player that could become a lot more.

“The people you would compare him to would be other point guards who have been playing point guard since they were eight-years-old, but he’s only played point guard for five months,” Hamilton told TSN over the summer. “So his upside is tremendous and the ceiling is high because he’s still adjusting to making the transition from being an inside player to a perimeter player.”

In the worst-case scenario, Barnes could’ve gone to a more rigid and traditional club that may have tried to put him in a box. Fortunately, he ended up with the right team, in the right era of NBA basketball. The Raptors won’t stifle his creativity, lock him into a position, or typecast him in a specific role.

On top of their well-documented reputation for developing young talent, they’re also one of the league’s forward thinking organizations. They’re going to nurture the things that make him unique as a player, and allow him to push the limits of his immense potential.

They’re also throwing him right into the fire, giving him the chance to play through mistakes without the fear of being pulled from the game for a silly turnover or missed defensive assignment. That’s not a luxury that every rookie gets, and while it could end up costing the team a win or two in the process, they’ve got the long view in mind.

“I try to say as long as those mistakes aren’t from effort or really not understanding schemes defensively, we’re gonna let [Barnes] play through stuff,” Nurse said ahead of Saturday’s contest. “Especially now, early in the year, get these guys through these rotations and let them keep going a little bit and just try to clean up their games as much as we can to be solid performers out there.”

The Raptors led by as many as 14 points in the first half before Doncic and the Mavs took over in the second. Dallas outscored Toronto 58-44 over the final 24 minutes, with Doncic scoring 16 of his game-high 27 points and Tim Hardaway Jr. pouring in 22 of his 25.

“It’s a challenge that I’m willing to take each and every night,” Barnes said, of guarding the league’s best players. “It’s what I look forward to.”

Barnes was a team-best +7 in Saturday’s loss, meaning the Raptors were outscored by 15 points in the minutes he sat. He was a +29 in Boston. Even at such an early stage of his career, he’s becoming an indispensible member of his team’s most productive lineups. What that means for his role in the starting unit when Pascal Siakam returns next month remains to be seen. Could they start small, with Anunoby at the two? Would they consider playing without a centre and starting Anunoby, Barnes and Siakam together in the frontcourt?

One thing is for certain, as long as he’s playing this well, and even when he’s not, Nurse is going to find a way to keep him on the floor and get him plenty of reps.

“Well, listen, I think this is a long process,” Nurse said. “I think when you see the size of a really young player, then to me the ceiling is really high. It’s just depending on a lot of things, like how much do they want it? How much work are they willing to put in? How healthy can they stay? Are you in the right spot? Are you working on improving? Are you listening and watching film? It’s going to be up to him how far he wants to go.”