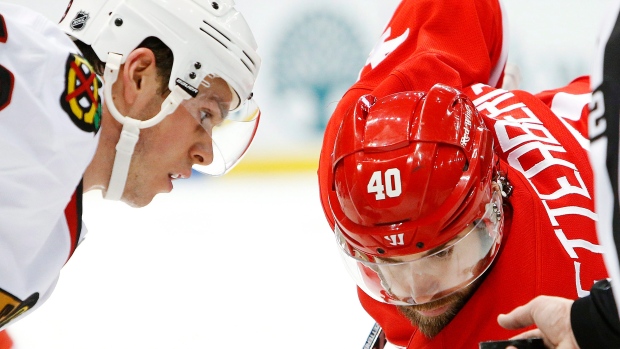 Ten years ago, the Detroit Red Wings and Chicago Blackhawks ushered in a new era of hockey – one built on speed, puck possession and an incredible pool of talent that ensured playoff contention every season.

But hockey, like most things, is cyclical. The state of the organizations in Detroit and Chicago is quite different in 2018. These two historic franchises wrote the playbook on how to build a contender in the modern era. But they also are writing a sequel – one that speaks to the importance of salary cap management and continuous player development.

Detroit’s story has already been written. The Red Wings are embarking on a full-blown rebuild and it may be some time before they come out of it. The Red Wings were naturally going to dissolve first. Their core was substantially older than their Original Six brethren, and so was their window of contention.

The Red Wings now carry the league’s oldest roster by a significant margin – the average player age working against the Detroit cap is 31, which is three standard deviations from league norms these days. Players age 34 and up, a vanishing breed in the NHL, are consuming about $36-million against the cap. Not only are those players relatively unproductive (or, simply not playing, like forward Johan Franzen), but the organization hasn’t been able to replace them with competent young talent. The rebuild is ongoing and will take some time.

That brings us to Chicago. I think some are expecting the team to rebound from last year’s dead-last finish in the Central Division. The Blackhawks do have some young talent on their roster (including Alex DeBrincat and Brandon Saad, who is just 25), and, sans Marian Hossa, their “core” is still intact.

But the Blackhawks core may be a bit more problematic than what appears on the surface. Patrick Kane, Jonathan Toews, Duncan Keith, and Brent Seabrook – four Blackhawks stars who are eminently responsible for three Stanley Cups since the 2009-10 season – just aren’t the same players in 2018. They are still impact players, but the degree to which they impact games certainly comes into question.

Let’s talk about what happened with Detroit’s core for a moment from their peak during the 2007-08 Stanley Cup through today. Those legendary Red Wings teams had a lot of core contributors, but from a longevity perspective over this timespan, you can isolate it to about five guys: Pavel Datsyuk, Henrik Zetterberg, Johan Franzen, Niklas Kronwall, and Nicklas Lidstrom.

Here is each player’s Goal%, by year: 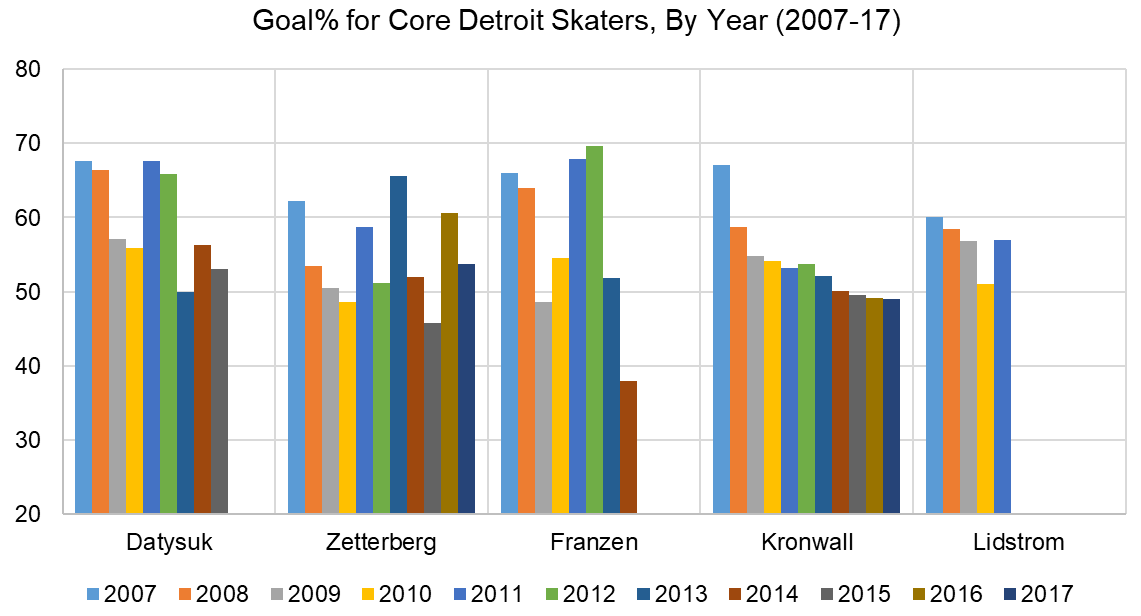 The common theme here, not surprisingly, is that these guys faded in effectivity as they aged – from dominance, to quality, to mediocrity, and almost perfectly in that order. That shouldn’t be surprising in any way but it does emphasize the importance of being able to replenish this type of talent through draft and development or external acquisitions.

The Red Wings haven’t been able to do that. And what’s left of the core – at this point, it’s just Zetterberg and Kronwall, and Zetterberg may have played his final game anyway – doesn’t impact the game in any significant way.

Again, this is a logical progression in any league, not just the NHL. But what’s important to remember is that these players either were or are eating up extraordinary slices of the salary cap. That’s particularly troubling in the NHL, since the league has a hard cap with no wiggle room above the ceiling. Zetterberg and Kronwall currently hit the Red Wings cap for $11-million. Franzen consumes long-term injured reserve space. At the time of their exodus, Datsyuk and Lidstrom were consuming $7.5 million and $6.2 million, respectively.

Another way of saying this: The Red Wings were spending an awful lot of money to preserve a group of players who were incredible in their prime. But their prime was many moons ago. Now it’s the biggest reason why Ken Holland and the Detroit front office have such a long road to recovery.

That brings us back to the Blackhawks. Keep in mind the Wings graph when you consider the Blackhawks situation since their first Cup in 2009-10. Also keep in mind that their core four will consume $34-million against the cap, or 43 per cent of available cap space in 2018-19: 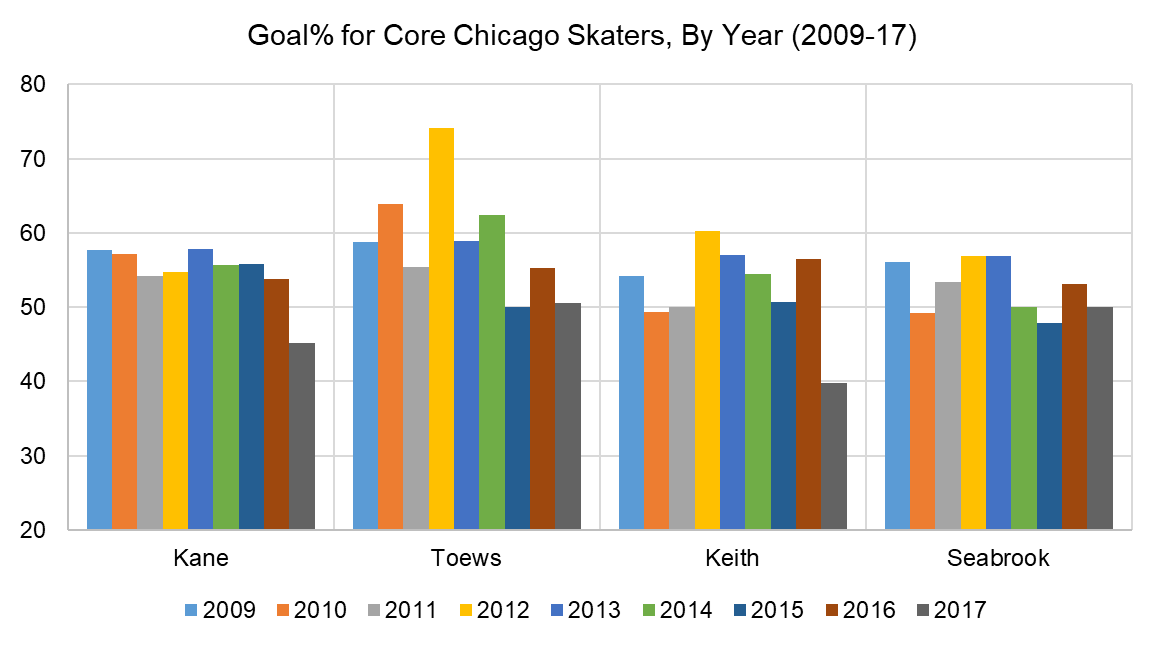 Much like Detroit in their prime, the Chicago core in their heyday manhandled the opposition, consistently outscoring their opponents by about a 60-to-40 margin. Every year since then, that number has dwindled. Last season, Toews and Seabrook just broke even on goals, and Kane and Keith were substantially under the 50 per cent line. For a group commanding such a large piece of the salary cap, that simply can’t happen.

I did leave out one player of note here, and that’s goaltender Corey Crawford. Crawford has had quite the renaissance in the later phase of his career and is one of the biggest reasons, save last season, why the Blackhawks have remained reasonably competitive. But Crawford has been on the mend with a mysterious injury for the last eight months, and it’s still not known if he will be available on opening night. Crawford turns 34 in December, keep in mind.

I’ll conclude on a couple of points. There isn’t a single soul in Detroit or Chicago who would trade their Stanley Cups for anything, and often times paying legacy players to stick around is about more than just what they do on the ice. Some of these players remain huge draws at the gate, and some can even extend their quality play into their 30s.

But it is interesting how closely Chicago’s road seems to be mirroring Detroit’s, which is probably not what Blackhawks fans want to hear right now. There is a far cry between retaining superstars at a premium and paying every player who played a role in a Stanley Cup run until the end of time.

The Red Wings and Blackhawks never appeared to know when to turn the faucet off. Now both look like they’re heading into a time where things will get worse before they get better.