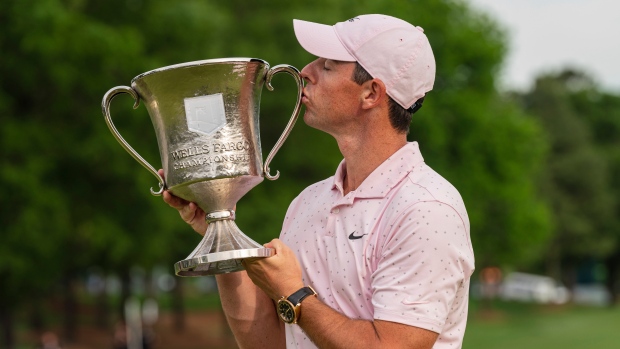 To get there, he had to survive a few nervous moments at the start of the week and also down the final stretch at the Wells Fargo Championship.

“It's hard to win,” said an emotional McIlroy, who almost pulled out of the tournament with neck pain that flared up on Wednesday. He managed to get treatment on Thursday morning and teed off with limited mobility.

McIlroy started the final round two back of Keith Mitchell and tied with Gary Woodland. After battling those two on the front nine, McIlroy birdied 14 and 15 to move out in front by two.

Just when it seemed as if he would cruise to the win, he hooked a three wood off the tee into a terrible lie in a hazard next to a creek. Rather than risk chopping it out, he took a drop and then flew his third shot onto the fat of the green, 45 feet from the cup. Two putts later, he secured the title, his third win over Quail Hollow Golf Course, where he has won twice before. It was his 19th PGA Tour win.

The decision to take a drop after the errant tee shot wasn’t McIlroy’s first choice. It came only after caddie Harry Diamond stepped in and asked his boss to reassess the situation.

“Ultimately we made the right decision,” McIlroy said, “and I dropped instead of trying to play that shot out of the hazard. Hit a great third shot onto the green and was able to two-putt from there.”

McIlroy came into the tournament after missing the cut at the Players Championship and the Masters. He said as he left Augusta National that his game was in tatters after he tried to build more speed into swing, to chase Bryson DeChambeau’s massive distance gains. Instead he found wild inconsistency in all parts of his game.

He switched coaches, turning to Pete Cowan before the Players, and the two focused on getting his swing more on plane in the backswing. This week, he began to hit fades off the tee rather than the draw that he’s used most of his career. Although he wasn’t perfect off the tee, hitting only 19 of 56 fairways for the week and just three on the final day, he managed to find greens, reaching 54 of 72, tied for third best in the field.

McIlroy also spent time over the last month with Brad Faxon, a fellow PGA Tour player and noted putting expert who provided help on the greens. McIlroy’s putting was notably improved over his recent events and he ended up third in Strokes Gained: Putting.

Together, it was as complete a performance the four-time major champion has displayed in some time and it came from a rather simple approach.

“That's sort of been my mantra is try to just hit good golf shots until I run out of holes and that's basically what I tried to do the entire day,” McIlroy said, “just take good shot after good shot until you get to the end.”

The win comes just two weeks before McIlroy returns to the Kiawah Island for the PGA Championship. He won the title the last time it was held at the South Carolina course in 2012. He hasn’t won a major since the 2014 PGA Championship.

“Hopefully history repeats itself and I can get a lot of confidence from this and go forward,” McIlroy stated.

This victory was also the first for McIlroy as a father after he and wife Erica welcomed their daughter, Poppy, into the family last September. Coming on Mother’s Day, the win was even more meaningful.

Mother and daughter were behind the 18th green to watch the father and husband end a long drought.

“Really cool for them to be here and to be able to celebrate today,” said McIlroy.