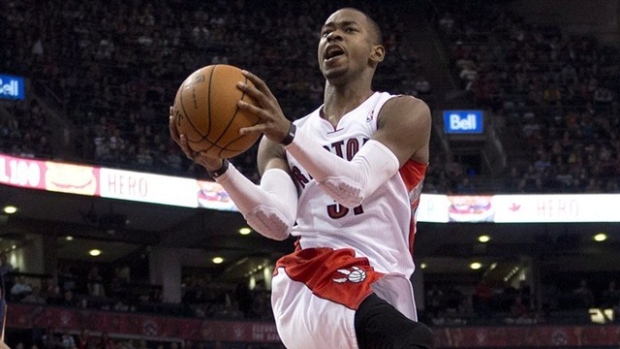 TORONTO - Greivis Vasquez has never been short on confidence, a trait Terrence Ross and a few of his teammates could use a healthy dose of right now.

"I'mma be an all-star too," the back-up point guard shouted at Pelicans' forward and MVP candidate Anthony Davis, an old friend, before shoving reporters aside in an attempt to interrupt the pre-game media scrum with his former coach Monty Williams.

We saw the good (nine assists, spark to start third-quarter run) and the bad (5-for-14 shooting, blown defensive assignment on Tyreke Evans' game-winner) from Vasquez on Sunday evening, but the Raptors' most pressing issue, suffering their seventh loss in a span of nine games, may be his biggest strength.

"We're playing in mud right now," Dwane Casey said after a disappointing 95-93 defeat at the hands of a New Orleans Pelicans team missing their two best players. "Confidence-wise, we've got to come out believing we're going to make a play offensively or defensively."

Vasquez started the second half in place of the struggling Ross, who didn't play a second in the game's final two quarters. For 11 minutes, the Raptors - led by Vasquez, DeMar DeRozan and Amir Johnson - competed at the level in which Casey had challenged them to play just ahead of tip-off.

"Today's game plan is simple," the Raptors' head coach had said." "Play hard. It's simple. So if they get intimidated by that, we're in trouble."

The Raptors scored 35 points in the third quarter, one fewer than they had totalled the entire first half, but were bested 81-58 during the other three frames.

Coming off a 15-point loss to lowly 76ers, New Orleans was playing without the injured Davis and Jrue Holiday in what seemed like an advantageous opportunity for Toronto to get back on track, or at least boost their fleeting confidence.

Instead, they came out flat once again. They scored 14 points in the opening 12 minutes, a first quarter season-low, and had just 36 at the break, fewest they've registered in any half this year. As they marched off the court following a lifeless 24 minutes of play, Vasquez noticed and took issue with the spattering of boos he heard from yet another sellout crowd at the Air Canada Centre.

"Fans have to be patient," the 28-year-old guard said. "Discouraged how they boo us and stuff like that. I don't think that's very nice because we are really playing hard for them and representing the city. We want the best and we want to win."

Toronto took a 12-point lead in the third quarter, a 28-point swing in just under 13 minutes, before it all came crumbling down again. The offence, red-hot moments earlier, dried up in a hurry and journeyman centre - and former Raptor, once upon a time - Alexis Ajinca scored 10 of his career-high 22 points down the stretch.

It was a contest the Raptors deserved to lose, and sure enough they did just that. No team, regardless of their confidence-level, should expect to steal a game in which they play just 11 minutes of spirited basketball.

"We're not losers in here," Vasquez said. "We want to win, we play hard. It hurts. It bothers us that we're losing the way that we're losing, but it's part of the NBA. So whoever wants to go out with us, it's cool. Whoever is not [on board], it's cool too."

Is there anyone in the room who is not on board, Vasquez was asked as a follow up.

After another uninspiring first-half performance - scoreless on three shots in just under 11 minutes of action - Ross spent the entire second half on the bench. As his teammates jumped to their feet applauding each bucket during their third-quarter run, the third-year swingman remained glued to his seat.

Reminiscent of his postseason slump last spring, Ross' body language told his story as it has for most of this month. Since averaging 36 minutes in the team's final five games of December, the 23-year-old is yet to log 30 in eight contests to begin the new year. He's hit just two of 15 shots over his previous three outings while his attention detail, primarily on defence, has been noticeably askew.

Casey has been hesitant to pull Ross from the starting lineup, and gave little indication on whether this change will be permanent going forward, but the struggling forward forced his hand on Sunday.

"We're not giving up on him," Casey said after the game. "He's a young man. All those [young] players, like I've always said, they're going to be up and down. We've just got to help him any way we can. Whether it's extra work, whether coming out of the lineup is going to help his confidence, whatever it is, we've got to get his mojo going."

"We've just got to be there for him the best way we can, uplift him just like we do everybody else," said DeRozan, who scored a team-high 22 points, 13 of them in the third. "We've all been there playing in this league. Everybody's been there some type of way. We've just got to help him out the best way we can and get him back on his feet. And once he gets rolling it's going to be something he definitely needed when he looks back on it."

So, the Raptors go back to the drawing board, with little time to get back on their feet before facing the upstart Milwaukee Bucks in Wisconsin on Monday. The confidence they had for the bulk of 2014, the edge, the mojo, the belief, whatever you want to call it, has escaped them. Somehow they need to rediscover it, and fast.

"The past week or two, we just stopped being ourselves," Vasquez said. "We've got to change. We do know that. One of the biggest things about this team and this locker room is that we care about each other. Chemistry. We've got to get our energy back, we've got to get our love for the game back. We need to struggle. This is good for all of us, because now we see who is with us.