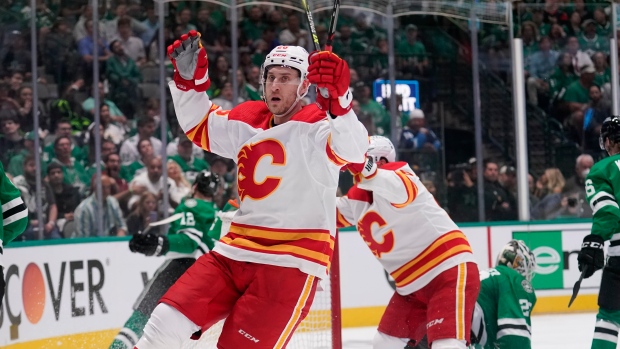 After the Calgary Flames’ 4-0 win over the Edmonton Oilers on Wednesday evening, blueliner Michael Stone made one thing clear: He wants to remain a Calgary Flame and convert his professional tryout into a contract, which would be his fifth with the franchise.

“I’d like to stick around here and stay with this organization,” said Stone, who scored his second goal of the preseason.

The 32-year-old Stone once again looked solid, contributing on the scoresheet while playing sound defensively, picking up right where he left off from last season. He was a healthy scratch for the majority of the 2021-22 regular season, suiting up just 11 times. Stone did play in nine of 12 playoff games, contributing five points.

“If you’re unhappy with the way things are going, eventually the negativity and maybe some comments you make about your situation, people don’t want to hear that. As tough as it is, he wants to play every night, but you want to be a person that your teammates enjoy being around. He’s figured out a balance where, ‘I’m not happy, but I’m not going to let them see I’m not happy’…I’m going to bring my best to the [locker] room every day.”

Stone has spent most of training camp paired with Finland native Juuso Valimaki.

“Just come in and play the way I know I can play and hopefully [I] get noticed for good things.”

Opportunities have come up elsewhere, but when asked if he saw himself playing anywhere else, he simply replied, “At this point, not really right now.” Stone also made it clear that he will continue living in Calgary once his playing days are over.

After the victory over Edmonton, Flames head coach Darryl Sutter singled out defenceman Nikita Zadorov for his strong training camp.

“Z’s had a really good camp,” Sutter said of the 27-year-old Russian.

For Zadorov, the familiarity of Sutter’s system has helped tremendously in him starting training camp on the right foot.

“My mindset was definitely to fight for the bigger role,” he said.

“Obviously I had a really good year last year. It was a great step for me, to get to know the Darryl Sutter system, the identity of the team and everything. This year I can do way more. I can be more active in terms of where I play, what position I play, what scenarios I play during the game.”

Zadorov has found his identity in the league, a process that took time after being selected 16th overall by the Buffalo Sabres in the 2013 NHL Draft.

“The more games you play, the more time you spend in the NHL, it’s a learning process. For some guys, it doesn’t take long. For some guys, it takes longer, like me…you grow mentally. I think this game is obviously a big part of it, but it’s all mental [and] how you prepare yourself for the game, how you understand the game, how much experience you have, knowing how to play in important situations for the coach to trust you…for me, it took a little while to figure out in this league, went to four different teams and had a few different coaches, and I think it’s finally coming along.”

“He’s such an important piece of our puzzle with his size and how he can play the game,” he said.

“To see him come back at a higher level is really important for us…it’s not possible to play an A-plus game every night, but when you’re having an off night, it can’t be a C game. You want it to be an A-minus, so figuring out how to be consistent and play his style of game night in and night out will be important for him.”

-Nazem Kadri is leading the Flames fantasy football league through three weeks, but the NFL isn’t the only fantasy sports league in the locker room. Zadorov, Mikael Backlund, Rasmus Andersson, and Oliver Kylington have their own Formula 1 pool going. Zadorov, a big Red Bull fan, is leading. His strategy: Pick Max Verstappen every time.

-Stone lost to Jarome Iginla in the final of their fantasy baseball league last week.

“Didn’t love it, but I’ve been in the final the last four years, won two,” he said.

-Also in the mix for the Flames’ sixth and seventh defence slots are Nicolas Meloche and Connor Mackey. Kylington’s status remains unknown, as he is dealing with a family matter and is not at training camp.

-Last season’s Flames were a tight-knit group that enjoyed each other’s company away from the rink. Don’t underestimate how big an impact that had in winning their Pacific Division title.

“It plays a huge percentage in a team’s success,” Zadorov said.

“You’ve got to be friends off the ice. I just don’t understand how you can, in normal work, people coming to an office and hating their boss and everything…every guy comes into our dressing room and enjoys spending time with their teammates. We’re like brothers. Last year was a building point. It didn’t come right away, but we started winning and playing well, road trips and everything. It brought us together…this year, I can see from the training camp that the energy is already there. The boys are super excited to see each other everyday.”

-It’s very easy to see Stone and Milan Lucic in player development or coaching roles after retiring from playing, especially with the AHL Wranglers now in town.

-One week into training camp, here’s a prediction for how the Flames will look on opening night against the Edmonton Oilers on Oct. 15: