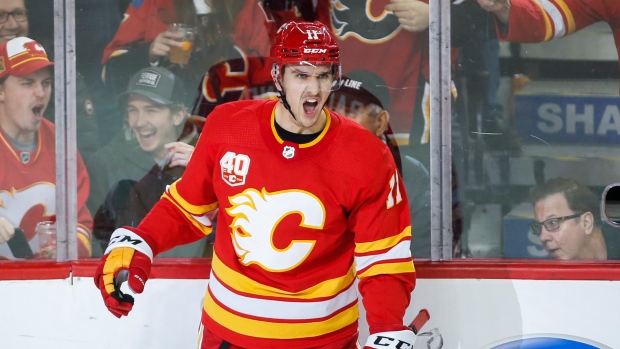 Immediately after learning of the summer blockbuster trade that sent Matthew Tkachuk to the Florida Panthers in exchange for Jonathan Huberdeau, MacKenzie Weegar, Cole Schwindt and a 2025 conditional first-round pick, Mikael Backlund went to work.

The 33-year-old Calgary Flames centre did some research, and determined that good friend Rasmus Andersson – who has yet to play his 300th career NHL game – is now the second-longest-tenured Flame (behind Backlund).

Over the past two seasons, the Flames have undergone a massive shift in on-ice personnel and a new core has emerged. Andersson, Backlund, Huberdeau, Elias Lindholm and newcomer Nazem Kadri are part of a new group of Flames that hope to accomplish more this upcoming season than previous versions of the team.

“There’s a lot of core guys moving out and new, I guess, core players moving in,” Andersson said.

“It’s a new core and you want to get to know each other quick.”

Much of Calgary’s foundation was already built when Darryl Sutter was hired as the team’s head coach in March of 2021 and evolved as they took the league by surprise and won the Pacific Division title last season. Now, with several new faces in the lineup, they will build off of that.

Blake Coleman, a two-time Stanley Cup champion, was hanging out with “people who don’t know much about hockey” when some of the moves were confirmed.

“Huby’s one of the best in the league, really tough to defend,” Coleman said of Huberdeau. The two had battles when Coleman was playing for the Tampa Bay Lightning from 2019 to 2021.

“A lot of run-ins with him. We were always chirping each other. I saw a lot of him being on a shutdown line, obviously him being a really good scorer…Weegs is just a really good competitor, just an all-round really solid defenceman. I think he’s one of those guys that just does everything well.”

Their Battle Of Florida days are over.

“We were texting right away, laughing at how much we hated playing against each other,” Coleman said.

“It’s one of those mutual respect things…now we can go after other guys together.”

The 30-year-old Coleman emphasized patience in integrating newcomers and seeing what works – and what doesn’t work – on the ice.

“There’s still a lot of unknown to the team and season,” he said.

Backlund said the team’s on-ice product in 2022-23 will look familiar to fans despite the roster turnover.

“We’re going to play the same way,” he said.

One of the questions facing the team this season is if they will name a captain. Backlund, who has more than 800 games with the franchise under his belt, is a logical choice should the Flames go that route. No Calgary player has worn the “C” on their chest since Mark Giordano in 2020-21.

Backlund is aware he is the popular choice.

“It’s fun and an honour to read that fans say that they want me to be it, but if we keep it with [alternates], I’ll be really happy with that,” he said.

“[Getting the captaincy] is not something I’m expecting. I expect we’ll go the same way as last year.”

-Andersson made it known that he wants to shoot more. He’s trying to defer to teammates less and get more pucks on net. Last season, he averaged less than two shots per game. “With the amount I’m on the ice,” he said, ”I think I should be around three or four [shots] average per game.”

-Despite his status as the second-longest serving Flame, Andersson’s tenure does not come with perks such as having a better parking stall: “Backs keeps telling me I still don’t have enough games.”

“He’s still middle-of-the-pack, age-wise,” Backlund said. His spot is the closest one to the players’ entrance at the Saddledome.

-Calgary’s new top line of Huberdeau-Lindholm-Toffoli will get some runway to find chemistry. Sutter spoke with Toffoli in the summer about the likelihood he’ll play more minutes.

-Huberdeau is slowly adjusting to Calgary’s altitude. Calgary is the eighth-highest city in altitude in North America at 1,046 metres above sea level. Sunrise, Florida, meanwhile, is at sea level (zero metres of elevation).

“Obviously the altitude here is much harder,” he said after Sunday’s 4-0 preseason win over Vancouver. “The third shift of the game,” Huberdeau said, is when he noticed the altitude difference.

-Coleman was with Johnny Gaudreau before free agency hit and confirmed how close the star was to coming back to Calgary.

“I was with him a few days before free agency at [Sean Monahan]’s wedding and even at that point, he was still freaking out, didn’t really know what he wanted to do,” he said. “I think that truly was a gametime, down-to-the-wire decision.”

-Sonny Milano, in Calgary on a professional tryout, has had a strong training camp so far, scoring during the intrasquad game and being effective in the first preseason tilt on Sunday. There is a top-nine slot up for grabs, and the Flames have let Milano know that he has a real opportunity here. Fellow PTO Cody Eakin has also stood out in a positive way.

-With MacKenzie Weegar, the Flames now have five of the league’s top-16 blueliners in plus-minus rating last season.