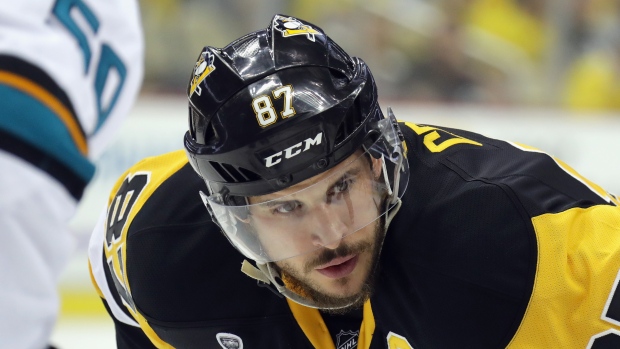 Logan Couture and Marc-Edouard Vlasic questioned Crosby’s on-ice integrity during faceoffs and accused him of receiving preferential treatment from officials.

“He cheats,” Couture said. “He gets away with it. He’s Sidney Crosby. He times them and they don’t kick him out for some reason, probably because of who he is.”

Crosby dominated in the dot in Game 2, winning 17-of-24 draws (71 per cent). He is now 26-for-40 (65 per cent) in the Stanley Cup final. His faceoff win accounted for his second point in two games in the series, but he has been a force every time the puck is on his stick.

“Maybe he should’ve been kicked out. It took him a while to get into the faceoff,” Vlasic contended. “But what do I know?”

In the NHL, the centre lining up for the faceoff in his defensive zone is required to position his stick on the ice in the dot first. Then, the attacking centre is supposed to place his stick on the ice, holding the supposed advantage of reacting to his opponent’s positioning.

By waiting too long, or not placing your stick on the ice at all, a centre can hold a decided advantage to swipe the puck out of the air before it even hits the ice. It would be like drawing your gun a step too early in a duel.

That did not appear to be the case for the game-winner, which came 2:35 into the extra session. Crosby appeared to win it cleanly with his stick on the ice.

Crosby was one of six players on the ice for an optional practice in between Games 1 and 2, and he spent a considerable amount of time working on faceoffs with Eric Fehr.

“I've said it on a number of occasions. He’s not as good as he is by accident,” Penguins coach Mike Sullivan said. “He works extremely hard at it. He prides himself in the details of his game, like faceoffs.”

Sheary said that Crosby told him before the faceoff to lineup along the boards. He then won it back to Letang, who patiently waited because he sensed the Sharks would flood toward him and likely thwart his attempt at a shot on net, before finding Sheary in the high slot.

“We hadn’t really done that before,” Sheary explained. “He’s said he’s going to win it back and ‘Tanger’ (Letang) is going to find me in the soft area there. Found it pretty perfectly.”

Crosby finished the regular season ranked 23rd in the NHL among centres who took at least 1,000 faceoffs. He won 51.7 per cent of his faceoffs in 80 games, but said he couldn’t take too much credit for drawing up the plan that brought the Penguins two wins

“I call 25 faceoffs a game, so I got 24 wrong tonight,” Crosby said. “It’s one of those things – guys have to execute, you have to make the pass. That’s exactly what they did. Usually the centre kind of calls the play and I think those guys deserve a lot more credit than me.”

They also get none of the blame.