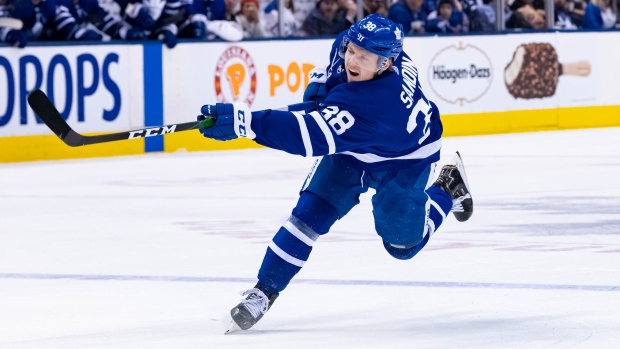 TORONTO — It’s been nearly 11 months since defenceman Rasmus Sandin last skated in a competitive hockey game, and a strong 7-2-1 start to the season by the Maple Leafs isn’t helping him crack the lineup any quicker.

The 20-year-old has been relegated to waiting his turn, which has become an ever-increasing challenge of its own.

“It's obviously a little frustrating,” Sandin admitted to reporters on Monday about his lack of ice time. “It was a very long time ago [that] I played a game. But [I’m] hanging in there and we’re having fun in practice and it's great being with the guys again. Right now, we've been playing pretty well as a group. We’ve been winning games, and so it's hard to get some changes [made] when that happens. We’ll just see; whenever I get the chance, I'll be ready.”

Sandin has been in a strange middle ground with Toronto since the season began, practising every day with the regular NHL players but as the only one among them who has yet to see any game action.

Even all the skaters on Toronto's taxi squad have made at least one appearance through 10 games, yet Sandin has remained on the outside.

It’s not where Sandin expected to find himself. After making his NHL debut with the Leafs in October 2019, Sandin went on to play in 28 games last season, producing one goal and eight points. His final game was also the last one Toronto would play before the COVID-19 pandemic shut down league operations on March 12.

Sandin was part of the Leafs' Phase 4 roster during last summer's postseason tournament, but never advanced past practising to get in a qualifying-round game against Columbus. He's continued to work at honing his skills since then, first back in his native Sweden and then throughout Leafs' training camp, only to find himself entrenched as the odd man out.

Difficult as that is, Sandin has tried to keep a positive attitude about his predicament.

“The only thing I can do right now is just practise as good as I can and as hard as I can, just to stay in shape and be ready for the opportunity when it comes,” he said. “I'm getting a lot of opportunity in the gym, and getting stronger too. I feel like my skills have gotten better and my shot as well [is better]. I just look at it as something [good] to try to bring out on the ice when I get a chance.”

It’s not that head coach Sheldon Keefe doesn’t want to give Sandin a shot; he’s just waiting for the right time. Part of the issue has been Toronto’s good health on the blueline, limiting any need for personnel changes.

The other is that rookie Mikko Lehtonen is ahead of Sandin on the depth chart, so when Keefe does want to rotate players in, or use an 11-forward, seven-defencemen lineup, Sandin isn’t getting the call.

More than all that though is Toronto’s commitment to Sandin’s overall development, something that goes far beyond just ice time. The blueliner was selected in the first round, 29th overall, in the 2018 NHL Entry Draft, and they’re willing to play the long game in getting him ready for the next phase of his career.

“We're sensitive to the idea that he hasn't played yet, and how difficult that is,” Keefe said.

“We've really tried to prioritize with him using this time productively to maintain or really improve his work habits and his training in the gym and maturing his body, and just learning what's necessary to be an everyday NHL player. [That’s] not just from a skill standpoint, but the habits that go into everything when you take your gear off, what you're doing to take care of yourself and improve yourself. There is some growth to be had there.”

When Sandin wasn’t playing for the Leafs in 2019-20, he was a top-pairing defenceman with the American Hockey League’s Marlies, tallying two goals and 15 points in 21 games.

In a perfect world, the Leafs might send Sandin back to the AHL purely to keep his confidence up with playing time, but the AHL still hasn’t received government approval for Toronto’s team to resume activities when the league’s new season begins on Feb. 5.

That doesn’t leave Sandin with many options, other than to make the best of his current situation.

“We have no doubts he's going to be an everyday NHL player,” Keefe insisted. “But we need to be as prepared as possible when that happens. Then [he needs] patience. He's got to take advantage of every day he has with the NHL team. He has a chance to learn and skate with NHL players. He's got to continue to stay ready and learn and get better through the process here.”