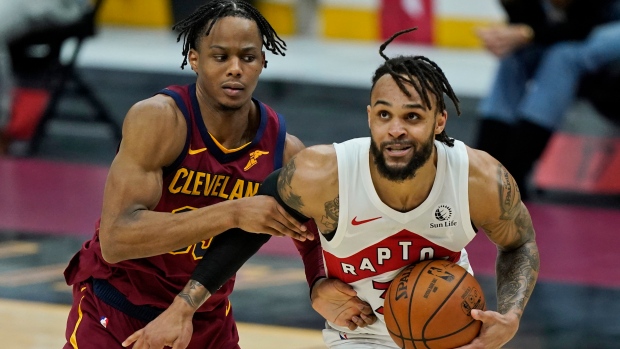 TORONTO – For obvious reasons, nobody around the Toronto Raptors will use the word.

No one is going to say it. Most don’t even want to think it. But, naturally – given the reality of their situation, with fewer than 20 games remaining in what’s looking more and more like a lost season – it’s getting tougher to ignore it or to completely dismiss it.

Tanking is a taboo subject in professional sports. After all, who wants to admit that they’re not going full bore to win every game? But when a team has every reason to start prioritizing its future over the present, it’s not uncommon to take your foot off the gas.

If the Raptors aren’t there yet, they’re getting closer. Any hope of securing a spot in the play-in tournament and maybe squeezing into the playoffs took a serious hit with Thursday’s loss to Chicago, hard-fought as it may have been, and the lineup sheet for Saturday’s game would suggest they’re mindful of that.

With Pascal Siakam getting a night of rest in the first leg of a back-to-back, Fred VanVleet nursing a hip injury and Kyle Lowry still out with a foot ailment, Toronto was missing its three leading scorers, as well as a host of others.

If the circumstances were different, would Siakam have sat out? Maybe – they’re in the middle of a seven-game in 10-day stretch and he’s been logging major minutes not long after recovering from COVID-19 – but probably not. If there were more urgency to win games, would Lowry – who is expected to return in New York on Sunday after missing seven of the last eight contests – have gutted it out on a wonky foot? Seems likely.

Call it what you want, but the Raptors have clearly switched gears over these past couple weeks – taking every precaution with their veterans, while giving the young guys every opportunity to learn and grow in expanded roles. If either the former or latter wind up resulting in more lottery balls, so be it.

However, if there was ever any doubt, the Raptors’ unexpected scoring barrage and unlikely 135-115 victory over Cleveland served as another reminder; just because teams may be able to justify taking a strategic step backwards doesn’t mean the guys on the court will go down quietly. Players don’t tank.

Of the 10 players that were available for Toronto on Saturday, only two of them have fully guaranteed contracts for next season; the recently extended OG Anunoby and rookie Malachi Flynn. Most of them are playing for their next job, whether it’s with the Raptors or for one of the league’s other 29 teams. They’re looking to prove their worth, to grow and get better, and to win – not to better the organization’s chances of landing a premium draft pick.

So, in the midst of a truly bizarre season, it’s only fitting that this makeshift group would cobble together one of Toronto’s most dominant outings.

With three starters – who account for nearly 58 points per contest – sitting on the bench in street clothes, the Raptors hit 17 of their first 20 shots and scored a franchise-record 87 points in the opening half.

“I don’t think any of these guys would be here if they weren’t NBA-calibre players,” said head coach Nick Nurse. “But inching up from the back of the roster to the middle of the roster, or even further, you’ve got to do it a little more consistently.

They had a great night tonight, but they’ve had some struggling nights, too. We’re just trying to patch up some of their mistakes and play to their strengths so they can have a little bit more solid nights, which is what we’re after.”

Regardless of how these next few weeks go from a record standpoint, the primary goals should be to develop the guys who are part of their long-term plan, as well as to evaluate the fringe players who could become useful pieces down the road. They checked off both boxes on Saturday.

DeAndre’ Bembry tailed off after a hot start, which included 11 first-quarter points, but continued to look like a solid two-way rotation player. Yuta Watanabe came in and impacted the game with his energy, scoring a personal-best 14 points on 6-of-7 shooting in the process. Even newcomer Freddie Gillespie, who just joined the team on a 10-day contract, earned praise – and the game ball – for bringing some much needed toughness and physicality at the centre position in his debut.

But, once again, the kids stole the show. For the second time in the span of 10 days, 22-year-old guards Gary Trent Jr. and Flynn both recorded career-highs in scoring in the same game.

Playing in his ninth contest as a member of the Raptors since coming over in the trade from Portland, Trent Jr. poured in 44 points, topping the 31 he scored against Oklahoma City last month. Remarkably, he only needed 33 minutes to do it and hit 17 of his 19 shot attempts. It was the second-highest field goal percentage for any player with at least 44 points in a game since 1954.

It’s hard to imagine anybody making a better impression on their new team. In roughly two weeks with Toronto, Trent Jr. has put up the two-highest point totals of his three-year career, set a franchise record with a plus-54 rating against Golden State, hit a game-winner against Washington, shown up to the arena wearing OVO and Blue Jays gear, and defended his new friend Anunoby in an on-court skirmish with Lakers guard Dennis Schroder.

Saturday’s was a game he’ll never forget. It was one of those nights shooters dream of, where every shot that comes off your fingertips feels like it’s going in. For Trent, who eclipsed 40 points for the first time since he was in high school, almost all of them did.

“He caught fire super early and then it never left,” said Flynn. “So when a guy's that hot, you just try to give him the ball and then stuff for everybody else gets easier. I think Gary did a good job of not forcing too much. I don't think he forced at all, honestly.”

Five of Flynn’s 11 assists came on Trent Jr. buckets, as the rookie scored 20 points and recorded his first career double-double. The first-year point guard showed impressive poise running the offence, making plays for himself and for his teammates, and leading his team’s response when the Cavaliers made their run in the third quarter.

Flynn has spent most of the season playing behind Lowry and VanVleet, but on Saturday the two veteran point guards cheered him on from the sideline. With both of them out of the lineup, he’s logged more than 30 minutes in five straight games and is continuing to take advantage of the opportunity.

“It's been a great opportunity for me to really play a lot of minutes, play through some mistakes, just continuing to learn the game at this level,” Flynn said. “It's been a little bit of a learning process but just trying to get better every game and everybody else is just helping me along the way, so it's been good.”

Even after cooling off a bit in the second half, the team shot 62 per cent on the evening, including 17-for-32 from three-point range. It was the type of performance they wanted and needed a couple nights earlier. Thanks to a series of injuries, a suspension and the health and safety protocols, the Raptors only had eight active bodies against the Bulls on Thursday. The loss wasn’t for a lack of effort, they just couldn’t get shots to fall.

It was essentially a three-game swing. Had they won that game, they would now be tied with the Chicago for 10th place and the last play-in spot, with the final meeting between the two teams in May determining the tiebreaker. Instead, the Bulls hold a two-game lead, which is actually more like a three-game cushion now that they own the tiebreaker. Their odds of going on a run and closing that gap aren’t great, but stranger things have happened.

With two emerging young guards, Lowry’s imminent return, and the addition of Canadian big man Khem Birch – who is expected to debut on Sunday and should help address the team’s glaring need at the centre position – the Raptors could still make some noise, whether they would prefer to or not.​