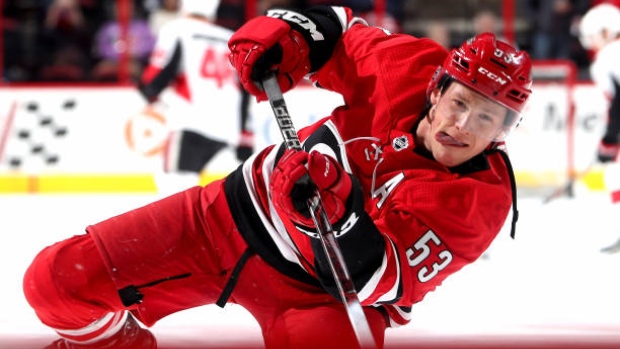 Are you in the market for a productive top-six winger on an expiring contract? Jeff Skinner may be your guy!

Skinner has become a hot trade commodity in recent months. He’s just 26 years old and his expiring contract ($5.7 million cap hit) should fit on most rosters around the league. As a trade piece, he should generate a pretty sizeable return.

Why Skinner isn’t a part of Carolina’s long-term plans is unknown. He does have something of an injury history and his scoring rates dropped materially year-over-year – his 24-goal, 49-point season last season looks nice on the surface, but his 37-goal and 63-point season the year prior looks a lot better. Perhaps Carolina rates him highly but believes he’s not going to re-sign. Perhaps they don’t rate him as highly as they used to. Either way, he’s available.

One angle worth visiting on Skinner concerns his individual scoring and, more generally, Carolina’s performance when he was on the ice. Historically, a forward’s trade value tends to be impacted by recency bias. In Skinner’s case, he dropped 14 points year-over-year. The same is true for plus-minus, regardless of how unfair (and in many cases, meaningless) it can be. Skinner posted a career low of minus-27 last season.

At 5-on-5, Skinner was his usual self. He racked up 18 goals (that’s tied for 27th in the NHL, with names like John Tavares and Johnny Gaudreau), which is right around his career average. His teammates, when on the ice with Skinner, added another 24 goals. Again, that’s pretty consistent with what we have seen over the last five years:

Offensively, he would appear to be the same reasonably productive player he’s been for most of his career – both in the way he scores goals and the way his teammates score goals. But goal numbers only tell us in a literal sense what occurred. What if Carolina was less threatening offensively with Skinner on the ice, but lucked their way into scoring on a higher percentage of their chances? Or, alternatively, what if Carolina was truly more threatening offensively with Skinner on the ice and they weren’t rewarded for it?

As you might suspect, that’s the basis for this piece. Corsica does a fantastic job of calculating “expected goals,” which assesses the probability of any individual shot at finding the back of the net. Over long periods of time, expected goals tend to sync well with actual goals. But in smaller samples, you might find considerable variance in the measures that could be attributable to a number of things – both controllable and uncontrollable.

Curiously, that was at play in a major way with Skinner last year. Let’s look at Skinner individually first: 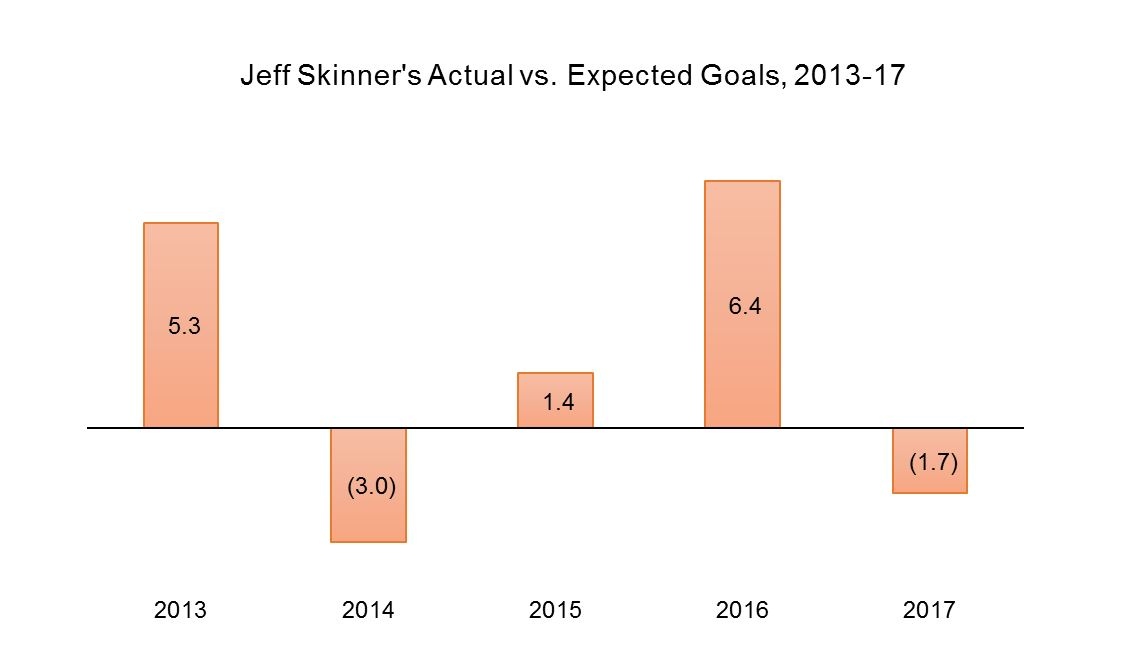 We don’t see a lot of variance here, and last year was pretty much dead on. Skinner scored 18 5-on-5 goals, and Corsica’s expected goal model had Skinner scoring 19.7 goals. That’s pretty close (net 1.7 goals). Another way of saying this: Based on the way Skinner threatened in the offensive zone last year, he scored about as many goals as we would have figured.

But what about his teammates when Skinner is on the ice? Here’s where it gets interesting: 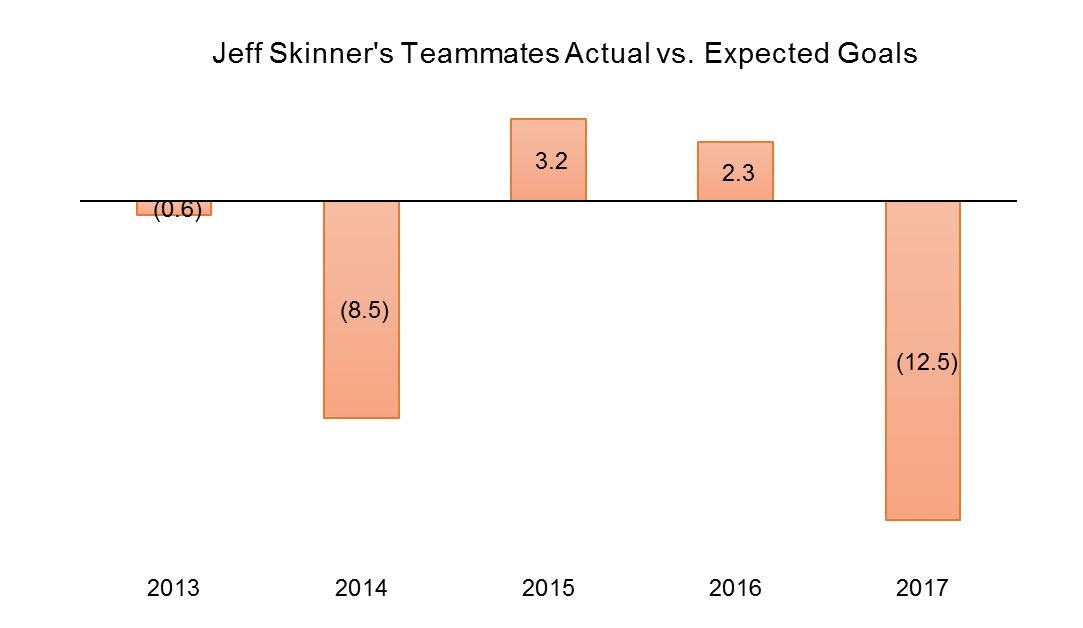 That’s a huge number. Corsica estimates that Skinner’s teammates – with Skinner on the ice, mind you – should have scored 36.5 goals at 5-on-5. They actually scored 24 goals, 12.5 less than our expectations. That’s going to have a sizable impact on a number of things – Skinner’s assist rates, his plus-minus or Goal%, and, more generally, the number of wins compiled by Carolina over the course of the season. If you think Skinner is contributing to the number of opportunities his teammates are getting, then maybe it’s fair to conclude there’s an adverse teammate impact here.

Skinner bounced around the lineup quite a bit last year but he did have some more common teammates than others. At forward, he played with Derek Ryan, Elias Lindholm, Justin Williams, Victor Rask, Phil Di Giuseppe, and Lee Stempniak. Outside of Ryan, who is early in his career, that’s an awful lot of guys in the top six who don’t shoot the puck well, though it must be noted they may do many other things well. As one example: Williams has made a career of living in the offensive zone and is the type of player who may trade a bit of shot quality for a bit of shot volume.

I think there’s pretty compelling evidence that Skinner is still a fantastic goal scorer, but I also think that he was probably much better in 2017-18 than his counting numbers show. If you’re a contending team with a bit of cap room to play with, you could do a lot worse than finding a guy who has established himself as one of the better attackers in the league.