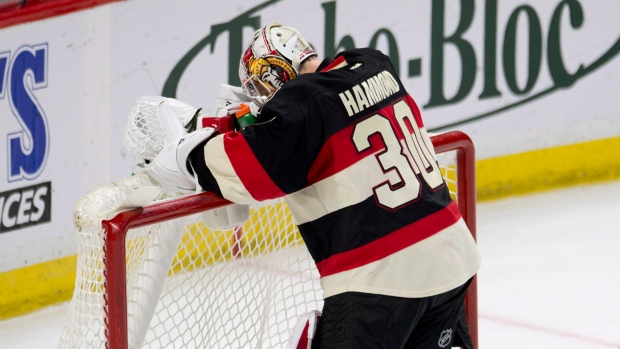 What a difference a week makes.

Last Monday, the Ottawa Senators beat the San Jose Sharks and climbed past the Boston Bruins and into the final playoff spot in the Eastern Conference. The confidence was at an all-time high. The city was alive with a buzz that is usually only reserved for the playoffs.

But as we sit here today, the Senators – and their fan base – appear to be an emotionally fragile group. Three consecutive losses will tend to do that.

So what happened to the uber-confident Senators who went on one of the greatest runs in franchise history? There are a few theories floating around as to why Ottawa's playoff bubble has burst. The answer probably lies with a combination of all five of these answers, but here's a look at the top reasons why the Senators have probably lost three games in a row – and their mojo at the same time:

The Senators look like a shell of the team that stormed back with four third-period goals against San Jose last Monday for a convincing 5-2 victory. In the three games since, Ottawa has looked tired, flat and tentative – and that's being as polite as possible. The Senators could be given a mulligan for the 5-1 loss to the Rangers on Thursday since it was against one of the elite teams in the NHL, but the performances against Toronto and Florida were inexcusable. The team lacked spark and jump on the weekend and that has led to speculation this team is showing the effects of fatigue – both physically and mentally. The game against the Panthers was Ottawa's 15th in the span of 27 days.

In his post-game press conference on Sunday, Cameron admitted that playing so many meaningful games in the past few weeks has maybe caught up to his team. "I think that wears on you. We've had a lot of Game 7s here for a long period of time and it's probably taken a toll," Cameron said. "But it's that time of year." It should be noted that Cameron did a very good job of managing his team's busy schedule in March, by giving the players the day off when they weren't playing. But even with that unique approach, the club still appears to have hit a wall.

Is there a difference between being the hunter and being the hunted? When the Senators started this unbelievable march to the playoffs, they were a full 14 points behind the Boston Bruins. The club was playing with little or no pressure – even when they swept California, few people believed they were the real deal. But with each passing win, the Senators became the darlings of the hockey world and were essentially playing with house money. A group that was counted out by experts a few weeks ago, was using a 27-year-old goalie's magical hamburger power to vault themselves back into the playoff picture. It was a feel-good story and a great ride.

But after beating the Sharks last Monday, the Senators actually moved past Boston and into the final playoff position in the Eastern Conference. The mood in the city suddenly shifted from 'Wouldn't it be great if the Sens made the playoffs?' to 'We'll be disappointed if the Senators miss the post-season.'" It was a radical shift in expectations and perhaps the players are now feeling a little bit of that. Heck, the City of Ottawa wanted to prematurely open up the Sens Mile because of the playoff fever that had gripped the city.

The Senators haven't won a game since that whole city hall controversy, but that is really a small sidebar to this whole story. Ottawa hasn't played with the same passion or confidence since they were the team holding down the final playoff spot in the Eastern Conference. Perhaps now that many people are counting them out again, they can return to that style of care-free and confident hockey that saw them go on a 17-2-2 run. This group isn't battle-tested yet, but maybe this stretch of games will teach the young core about what it takes to win when the pressure is on. It felt like they've been playing not to lose in the last three games – rather than trying to win.

This wouldn't be a 'what is wrong with the Senators?' piece if we didn't touch on the goaltending. In the past three games, the Senators have surrendered 13 goals. It started when Andrew Hammond got the hook on Thursday against the Rangers, after allowing five goals on just 22 shots. It was clear that Hammond was feeling the effects of a collision with Logan Couture from earlier in the week, but this was his first poor outing as an NHL starter. Craig Anderson re-entered the picture on Saturday at the Air Canada Centre, but promptly gave up four goals in the final 24 minutes of that game. Anderson has looked solid in his two starts, but unfortunately, he didn't do enough to steal a much-needed win for Ottawa.

But as much as the goaltending deserves some blame, the team's defensive play has probably been the bigger culprit on this recent slide. Twice they held a two-goal lead at the Air Canada Centre on Saturday, only to allow the Leafs to tie the game and win it in overtime. Defensively, there have been too many miscues in the past three games and when the goaltending hasn't been there to bail them out, it results in a stretch where Ottawa gets only one point out of a possible six.

When the Senators were humming along, the Mika Zibanejad line was flying. Zibanejad was a horse on the trip to California, going up against some of the best centremen in the NHL and coming out with points in all three wins. Zibanejad actually had a seven-game point streak which started in California and then last week against San Jose, his two-goal performance was a big reason why the Senators were able to skate to victory.

But in the last three games, the Zibanejad-Bobby Ryan combo has gone ice cold. During the three-game losing skid, Zibanejad has no points and a -5 plus/minus rating. Ryan has also been held without a point during this losing streak and admitted after Thursday's game against the Rangers that it was probably the worst he's played in a Sens sweater. Zibanejad and Ryan are the team's two most talented forwards and the Sens need them to raise their game at Detroit Tuesday if they want to get back into the playoff picture. The good news is that both players have been completely accountable for their lack of productivity lately, but the team needs them to put their words into action.

When Ottawa beat the Toronto Maple Leafs last Saturday at the Canadian Tire Centre, it proved to be a costly win. Both Milan Michalek (upper body) and Matt Puempel (high-ankle sprain) were lost to the club for an extended period of time. In the case of Puempel – who was getting a shot to play some top-six minutes alongside Zibanejad – he will be out for at least a month with his injury.

The Michalek injury was painful for Ottawa because he was rounding into the form and serving as one of Ottawa's most consistent and reliable forwards. He had nine points in his last 11 games and developed terrific chemistry alongside Kyle Turris and Mark Stone. But with Michalek and Puempel out of the lineup, the Sens have had to rely on two forwards who have been out for extended periods in Clarke MacArthur and Zack Smith, as well as another forward – Colin Greening – who has been a healthy scratch or in the minors for most of this season. The chemistry on the forward lines hasn't been the same since these two injuries.