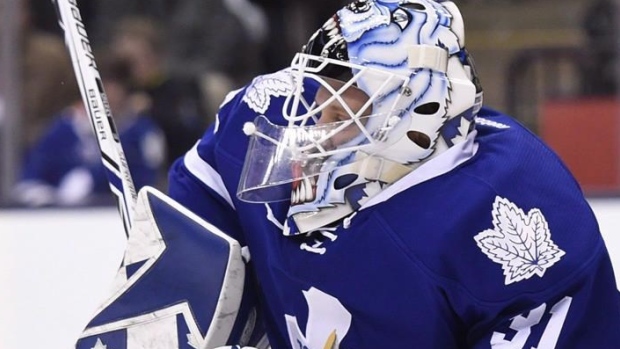 TORONTO -- More than a week after being sent home from a Toronto Marlies’ road trip for violating team policy, goaltender Garret Sparks has returned to the starter’s net.

The 23-year old was suspended by the Toronto Maple Leafs organization when an online conversation in which he directed violent and sexist language at another user came to light on Nov. 22. After sitting out three games, Sparks backed up in Rochester on Friday and got his first start since Nov. 20 on Saturday.

“It’s been a lot to deal with. I understand what I did,” Sparks said after the 3-2 loss. “[The incident] wasn’t me. That’s not who I want to be known as, it’s not the image I want my reputation to have.”

Without detailing conversations he had with management, Sparks acknowledged those talks should never have been necessary.

“I should know the difference between what I can and can’t say,” he said. “It’s just holding myself to a higher standard of professionalism.”

Sparks used his time away to work closely with the Marlies staff, and spoke with just about every “positive influence” in his life. Taking the “good and bad” information they gave him to heart, Sparks hopes it leads him towards being a better person.

“A lot of [their advice] focused on the fact I had the right intentions, but I didn’t execute the way that I should have,” he said. “I just want to move forward.”

Marlies head coach Sheldon Keefe was succinct in analyzing what he thought Sparks took away from the ordeal.

“I don’t think Garret’s had any shortage of learning experience in pro hockey,” Keefe said. “I don’t think this is any different.”