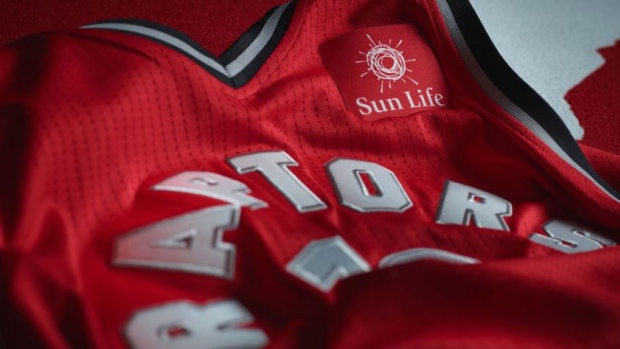 The Toronto Raptors have signed an agreement with Canadian insurance company Sun Life Financial to put its logo on the front of Raptors team jerseys for the next three seasons, TSN has learned.

Two people familiar with the matter told TSN that the deal is worth more than $5 million (Canadian) per year for Raptors parent company Maple Leaf Sports & Entertainment Ltd.

MLSE chief commercial officer Dave Hopkinson said he was looking for a partner that preferably was based in Canada but was considered a premier brand with global reach.

“Sun Life checked all the boxes,” he said in an interview.

Sun Life chief marketing officer Lisa Ritchie said her company began talking with MLSE in January about the Raptors sponsorship and plans to use it to help improve public awareness of type 2 diabetes.

“It’s an epidemic and it’s preventable with a healthy lifestyle,” Ritchie said in an interview. She declined to comment on the financial terms of the agreement.

The two-inch square Sun Life patch will be on the left side of the jersey, Ritchie said, adding that the company plans to announce additional components of the Raptors sponsorship deal, including more signage within the Air Canada Centre, later this fall.

“NBA athletes aren’t just some of the world’s best athletes, they’re also some of the world’s biggest celebrities,” Hopkinson said. “It’s the sport where you get closest to the athletes without any barriers.
Photographers are right under the basket, cameras zoomed right in. I think it’s going to be a high-impact sponsorship for Sun Life.”

The Raptors are the ninth team to strike such an agreement under a NBA pilot project. The league’s effort has seen several teams sign lucrative agreements.

The Boston Celtics have a deal with General Electric that is worth at least $8 million (U.S.) annually. The Cleveland Cavaliers have an agreement with Goodyear Tires, the Philadelphia 76ers with ticket company StubHub, and the Orlando Magic with Disney. The Brooklyn Nets will receive $8 million (U.S.) per year from software company Infor.

Ads on jerseys are a hotly-debated issue in professional sports. While traditionalists decry the prospect of corporate ads on jerseys, leagues are eyeing a new revenue stream. Other North American-based leagues, including the Canadian Football League and Major League Soccer, have sold ad space on jerseys for years.

Compared to the NBA, the NHL has moved cautiously with jersey ads.

During the World Cup of Hockey, the NHL sold jersey ads to software engineering company SAP, although the league has decided to hold off with ads on NHL team jerseys.

“I imagine every league that doesn’t have ads on jerseys is watching,” Hopkinson said.