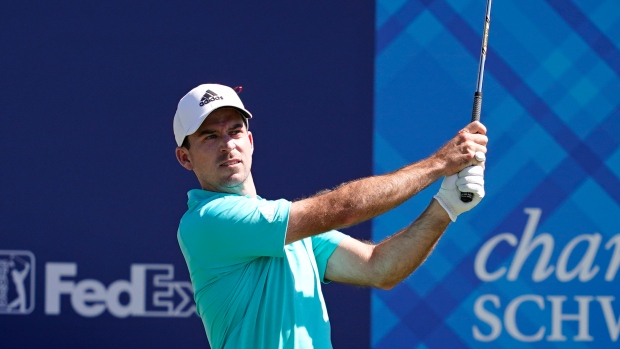 Two Canadians looking for a boost in play finished up on top of the leaderboards in their respective events on Thursday.

Nick Taylor was part of a seven-way tie for top spot after the first round of the Charles Schwab Challenge at Colonial Country Club in Fort Worth, Texas. He was alone in top spot until an 18th-hole bogey dropped him back into the pack with Patrick Reed, Webb Simpson, Harold Varner, Scottie Scheffler, Cam Davis and Chris Kirk.

The four-under round, which included an eagle and four birdies, came after Taylor made it through Monday’s 36-hole qualifier for the U.S. Open.

“I felt like I putted really nice on Monday,” said Taylor, “and that kind of led into today. Drove it really nice today, hit a lot of fairways, which is tough to do out here. I think with the wind direction today, there was a lot shorter clubs into certain holes that I was able to take advantage of.”

The Abbotsford, B.C., product found nine fairways and 14 greens during his round. The highlight of the day came when he holed his second shot on the par-4 12th from 95 yards. That pushed his score to five under and into solo lead at the time.

Taylor said his preparation for this tournament, which he is playing for the eighth time, included lots of rest after the gruelling outing on Monday.

“I knew I was playing well so I didn't need to overdo it,” he stated. “So just spent less time out here really.”

Adam Svensson, the only other Canadian in the field, was at three under and tied for 26th.

At the PGA Senior Championship, Mike Weir was one off the lead held by Australia’s Steven Alker and American Bob Estes. Weir was tied with Paul Claxton of the U.S., who both finished the opening round of the major championship at six under.

Weir jumped out of the gate making a birdie on his first hole of the day.

“It was nice to start with a birdie,” said Weir. “I hit a really nice drive opening out and followed that with a rescue club that left myself 30 feet or something or eagle. Nice two-putt there to get the day started and my day was just a lot of really good ball-striking.”

Weir recorded eight birdies on his day, including three over his last five holes. He credited improved wedge play and putting for his solid round.

“My short game was much better,” said Weir. “I think the last tournament I played was the Regions Tradition and I had a nice five-under final round and started to find something there a little bit with my short game, putting in particular and cared that forward today. Things were better today.”

There were plenty of low scores at the Harbor Shore Resort in Benton Harbor, Mich., with 57 golfers breaking par.

“That's the nature of the Champions Tour now,” said Weir. “Lots of low scores. Guys really play well, and you have to get off to a good start.

“You have to keep the pedal down out here.”

Stephen Ames finished the first round at three-under par while David Morland was at two over.