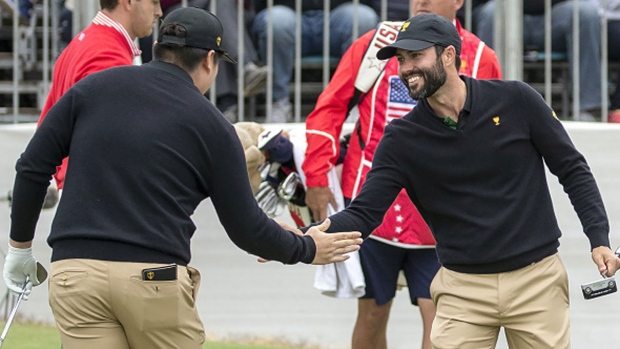 For the first time in a long time, Team International isn’t staring up at the leaderboard and looking at a deficit.

Thanks to some brilliant putting right through the lineup, the rest-of-the-world-except-Europe squad took a rare lead after the first day of the Presidents Cup. The last time the proverbial punching bag in this competition had a lead of any sort was back in 2005.

In fact the Internationals scored more points in Thursday’s opening fourball session than they did in the first four sessions in 2017 combined.

“We've got a long way to go, but this is an unbelievable start,” said Ernie Els, the International captain. “We haven't had a start like this for many years. We'll celebrate this little session victory and then we've got a couple more to go.”

The only match they didn’t win was the opener, where playing captain Tiger Woods and partner Justin Thomas easily handled Marc Leishman and Joaquin Niemann 4&3.

But in the other four matches, the Internationals frustrated their American counterparts by draining putt after putt after putt. Some were long, others clutch. On the slick greens at Royal Melbourne, Team International simply played better than the higher-ranked, pre-tournament favourite Americans.

C.T. Pan dropped them from 25 and 30 feet, and Abraham Ancer rolled in a bomb from 40 feet. Even Adam Scott, whose putter is almost always the worst club in his bag, found the bottom of the cup in a timely fashion.

One of the brightest stars for Els was captain’s pick Adam Hadwin, who was added to the squad in large part due to his putting prowess and he didn’t disappoint.

After his partner, Sungjae Im, chipped on the first hole for eagle to set the tone, the Canadian went to work playing smart, strategic golf and wearing down his inconsistent opponents Xander Schauffele and Patrick Cantlay.

Hadwin made lots of key putts during the day but none bigger than the 15-footer on the 16th hole that gave the duo a 1-up lead with two holes to play. That stood up to give Hadwin his first win in Presidents Cup play.

“That's what we practise for, those moments right there,” said Hadwin who went 0-2-1 in his first Presidents Cup two years ago. “You know, 1-up with two to play rather than even is a much better spot to be in.”

The Canadian looked calm and confident throughout his round, riding out the highs and lows that come with match play. He was clearly a steady hand for the rookie Im.

“We enjoyed it,” he said. “We both played well at times. I also don't think that [Im] got too ramped up after that chip-in. I think he showed some emotion and settled down quite quickly, and it was back to business as usual.”

While Hadwin was almost stoic throughout his round, he did manage a wide smile on the first tee when the Australian fans, who were loud and imaginative with their cheers and songs, serenaded him with what will be his theme for the week, Hadwin Beneath My Wings.

The fast start was a boost to the Internationals and history shows that no team has lost a Presidents Cup when leading by three or more points after the opening round. But Friday’s Foursomes may be an even tougher test. The Americans have dominated the alternate-shot format and since 2007 have amassed a 45-17 point advantage. That fact wasn’t lost on the Canadian golfer.

“You know, like Adam [Scott] said, we're one session at a time, and just keep playing that steady golf,” Hadwin stated. “Keep putting pressure on them and force their hand a little bit.”

Hadwin goes back out in the second session, partnered with Niemann. They’ll take on Cantlay and Schauffele.

Woods is also back in the lineup for Round 2, again paired with Thomas. They meet Hideki Matsuyama and Ben An.

His Friday appearance wasn’t in the original plan but the fact he was the best American on the course on Thursday meant going to Plan B.

“We have a couple different options rolling into this entire Cup,” he said. “The guys have known the game plan, different possible options, and this is one of the scenarios.”

It’s not exactly time to panic for Team America, but clearly the stunning loss has rattled the U.S. team in a way it wasn’t expecting.

Scott/Oosthuizen vs Kuchar/Johnson
When Adam Scott is sinking putts as he did on Day 1 and he’s paired with Louis Oosthuizen who may have been the best International, I like their chances.

Niemann/Hadwin vs Cantlay/Schauffele
If the International pair can play the smart, steady golf as they did on Thursday, they might edge the Americans.

Ancer/Leishman vs Reed/Simpson
Leishman needs to be better, much better than he was on Day 1