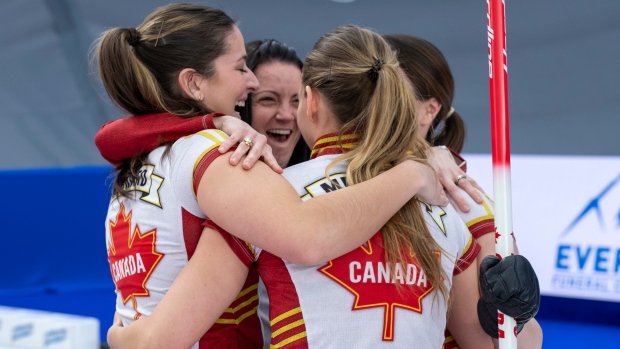 Call them the Bubble Girls. Or maybe Team Isolation. How about the Castaway Crew?

Whatever name you want to give them, Kerri Einarson and her squad of Val Sweeting, Shannon Birchard and Brianne Meilleur have been stuck inside the Calgary curling bubble for so long now, they’ve lost count of the days.

They won’t be leaving any time soon as the Winnipeg-based team, which also includes alternate Krysten Karwacki and coach Heather Nedohin, will represent Canada in the women’s world curling championships starting Friday.

As with every other curling event of note this season, it will take place in the Calgary curling bubble at WinSport's Markin MacPhail Centre. The protocols allow the curlers to travel between the rink and the hotel and nowhere else. It’s curling’s version of Groundhog Day.

“I’m not going to lie,” admitted Einarson. “I’ve been counting down the days (until it ends).”

The Einarson team arrived to play the Scotties Tournament of Hearts in early February, and then stuck around to compete separately with their male partners in the Home Hardware Canadian Mixed Doubles. Following the Tim Hortons Brier and the men’s world championship, they were back for two Grand Slam events and now the world championship.

Einarson also has one more adventure awaiting her after she and Brad Gushue won the Canadian Mixed Doubles title. They will play for the world title in that discipline in Aberdeen, Scotland May 17-23.

“We’ve definitely been taking one event at a time and just kind of breaking it down that way rather than thinking about being away for almost two months,” said Einarson. “Now we’re on to our third chapter, as Heather puts it.”

That’s the third chapter of a very long book. With only so much ice time available for both games and practice, there are a lot hours to get through. Some of that has been spent watching television and streaming services.

“We all have gone through Yellowstone,” said Birchard. “I just finished up RuPaul’s Drag Race this season and now I’m pretty disappointed that I won’t have that every Friday night for myself.”

There have been some card games, playing for marbles, and adventures into the hotel parking lot have allowed for a few walks as well as games of lawn darts.

Yes, lawn darts. This is what it’s come to.

After that, the team members have been getting into filming videos for TikTok. They include some obligatory game highlights set to music but also more creative ones on morning singing critiques, hallway hopping and some toilet roll goggles.

“We’ve really embraced TikTok,” Birchard said. “I don’t think that’s anything we ever thought we’d ever do, but we have a lot of down time and it’s a lot of fun doing it. That would probably be the strangest way we’ve passed the time.”

While the team has been extraordinarily successful during its quarantine run, winning the Scotties and last week’s Players Championship, the family separation has been tough. Einarson has two young daughters and although there have been a lot of FaceTime calls, it’s just not the same as the real thing.

This week she received a package at the quarantine hotel that included some Mother’s Day cards that the skip admitted brought an equal measure of smiles and tears.

In place of time at home, the team members and their coach have had to rely on each other during the long stretches of separation.

“There’s definitely not much to do other than hang out with the five ladies,” Einarson said. “It’s definitely brought us much closer. We’re just like a family and we have to be because we don’t have our families here.”

If there is any fuel needed for the nearly empty tanks on the team, it comes from the fact that a year ago, when this team won the Canadian crown, they weren’t given the opportunity to play for a world title. COVID cancelled the women’s world championship just a day before the first game was set be played.

They had to wait a year. They had to win another Canadian championship and they’ve had to endure an extended stay inside a hotel for this chance. There’s little doubt they’ll be ready when the event begins. Of course they’ll also be ready for when it ends and they can finally go home.