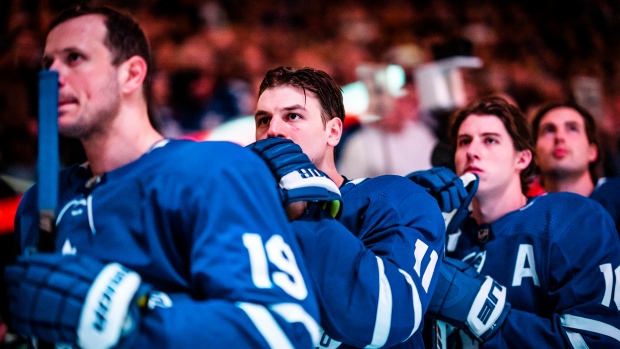 With the NHL season paused and no timeline for a return to game action, players are in limbo. They've been encouraged to self-quarantine in their homes for now. They’ve gone from intense playoff races to a whole lot of down time.

So, how can they stay in shape amid the uncertainty? We reached out to a couple experts in the field of athlete performance.

Matt Nichol is the owner of Paragenix Systems Inc. where he serves as a coach. Nichol is also the director of player health and performance for the Hamilton Tiger-Cats. He works with 24 NHL players.

Dan Noble is the athletic development coach at The Hill Academy and owner of Noble Sports and Performance. He works with a handful of NHL players, including Mitch Marner and Anthony Cirelli, and a number of prospects as well.

The interviews were conducted separately, but are being presented together.

Toronto Raptor Serge Ibaka has set-up a makeshift gym in his home. What can NHL players do, specifically, during this isolation period?

Dan Noble: "What we've instructed our guys, is to at least ensure they have access to the bare essentials as not all of them have full in-house gyms.  It's what I call the apocalypse workout kit: a pair of dumbbells, some bands, med balls, chin-up bar, and for the players that live in condos, get creative using stairs or ledges for step-ups or plyos. As nice as it is to have access to all the bells and whistles most of these teams have, there's a lot you can do even from a limited space and body-weight perspective. It's really going to test their own will and self-determination, because it's going to be on them as they won't have coaches and teammates around to push them."

Built my own little gym at home during the self quarantine... need to stay in shape! I hope everyone is staying safe, following the experts advise and keeping positive and calm. 🙏 pic.twitter.com/GGXrTk64Nn

Matt Nichol: "You mentioned Serge Ibaka so, for a sport like basketball, it's still obviously very complicated and a major disruption, but I think it's less so than a sport like hockey. In basketball, you certainly can keep your cardiovascular fitness up, if you had a gym in your house like Serge does you can certainly stay strong and stay fit and all that, but it's hard to replicate hockey practice all by yourself in your condo, so for the NHL it presents a unique challenge and there's really no way to replicate the demands of a practice, let alone a game, it's very, very tough. The longer this goes on it will present a larger and larger problem."

Dan Noble: "You can do some basic speed work even if you got a small, limited space, there's still stuff you can do. Whether its resisted runs with bands in place or different variation sprint drills that you can do that don't require a lot of space. There's also a ton of good body-weight work you can do such as squats, multi-directional lunges, single-leg squats, step-ups, plyometrics, it's all stuff that if done well can easily help the athlete maintain their fitness. At the end of the day it's about doing what you can to ensure you are as ready as possible for however this plays out ... If this season ends up continuing it’s going to be intense and demanding and the players are going to have to do what they can to ensure they are ready."

Assuming the season resumes at some point, how long will guys need to get revved back up and be ready for the most intense games of the year?

Dan Noble: "Hopefully, after this quarantine period, teams will be able to run small group, on and off-ice sessions with the players that have been cleared. This would at least allow them to begin to work with and prepare, what I would think would be a majority of the team, in a controlled and contained environment. In my opinion, the worst-case scenario is if they came back from 30 days off and had minimal time before they jumped back into the start of the season. Going form 0-100 is going to put a lot of players at risk of injury. I have to think you'll have at least a two week transition period or mini-camp prior to picking the season back up."

Matt Nichol: "In the short term most of these guys are over-trained and under slept and beat up and battered and bruised so a little time away might actually enhance the quality of the game, but for every day that it goes beyond three or four weeks you're definitely going to have a pretty significant  decline in performance. But everybody’s in the same boat so I guess that makes it fair."

I have been getting a lot questions lately of what players who are under self isolation can do in terms of training. As a coach that has always had to program with minimal facilities and equipment I have come… https://t.co/lbyDMNNpnO

Dan Noble: "Obviously, the on-ice component is another area where these guys can't train, there's nowhere for them to really skate right now, all the (NHL team) rinks are closed and going to a public facility is probably one of the worst things they can do. So, it's about doing what they can to not only physically prepare, but also deal with the bumps and bruises of the season and taking some much-needed time to recover while paying specific attention to their shoulders, backs, groins and hips. That may be the one good thing to come from all of this, if the players do embrace this time period, it's an opportunity to get healthy and get better."

Matt Nichol: "I've been in communication with several players already and there are some that are being more proactive than others but, in general, even the ones that are really staying on top of their health and fitness, even those players will not probably have structured practice or structured on-ice work. That's sort of the silver lining that, relatively speaking, everyone's kind of going to be at the same level so the playing field is level that way."

How important is nutrition?

Dan Noble: "Nutrition is hugely important right now, especially for the younger guys, who aren't at home cooking five-course meals. Most of these guys are used to going to restaurants or having food services, but a lot of that may not be available to them. So, the nutrition aspect is significant.  Players are so accustomed to the teams and staff providing them with whatever they may need nutritionally that it's going to be a big shift for the players to ensure they are self-regulating and ensuring they are fueling their bodies properly."

Matt Nichol: "On a super basic level, the overall caloric demand, if you're not doing team practices and games, is going to be lower. Even if you're making a conscious effort, like Serge Ibaka, to stay fit in your home gym, it's not going to be at the same level of a practice or a game so overall guys need to be mindful of that. If there is any good that's in this situation now, and there's obviously not much, it's made everyone super aware of their immune system health and staying healthy so that's a positive. Overall, guys need to make sure they're eating healthy and they're not consuming an excess of calories with a sudden drop off in their caloric expenditure."

Dan Noble: "In 30 days you can lose 10 pounds or you can gain 20 pounds. Either way that can have a massively and mostly negative impact on performance. The danger is that you have a lot of young athletes that are being told to stay out of public and so the options become them playing video games and watching Netflix and most likely not eating great. Most of the players won't have any issue working out 90 minutes a day as they are accustomed to that, but what do you do the rest of your time? It's the free time that they are not used to and that's where they need to be careful.  Unfortunately, there's only so much you can do, especially if you're locked up inside. It's not like, especially in Toronto, the Leafs can go out about town and walk around. It's a pretty limited in terms of what you can do."

What are the most common questions you are getting from players right now?

Matt Nichol: "Everyone's kind of in the dark and from what I understand, and I'm not in communication with league or team sources other than players, but it seems like there's going to be a lot more information that will be disseminated to everybody on Monday. So, for now, everyone is in the same boat, no different than anybody else, concerned for their health and concerned for their families and they're being cognizant of fitness, but that's not the top priority right now. I'd imagine that will change in the next day or days when they realize that there will be a significant amount of time they'll be away from practice and games and they'll need to take a concerted, conscious, planned, scheduled approach to their fitness."

Possibly the single most important quote in business, in athletics and in life #MLKDAY pic.twitter.com/lGV2yg0RaP

Dan Noble: "My message to the guys was to focus on what you can control and to stay focused on the big picture. No one knows how long this thing can get dragged out, but the worst thing you could do is let all that hard work you have put in all year go to waste. Right now, they have to deal with what's in front of them and take it one step at time and continue to get better where they can. We always tell our players all summer and I think it rings true even now, 'Find ways to get better every day.'"

Matt Nichol: "The problem is that right now it's really uncharted waters. There's some precedence with the various lockouts that we've had in the past. In the last lockout I was working privately and was slammed in a gym full of people all day and then the previous one I was working for a team and it was a quiet time for me, but this is a completely different situation. In those cases they had maybe not an exact timeline, but they had some reasonably educated guesses on timelines and expectations of what the different circumstances would mean and how exactly teams should and shouldn't interact with players and I don't think they have any of that this time. It seems that every team is conducting themselves in a slightly different fashion. It's no different for these teams than it would be with any other industry or with any other person, it’s really a rapidly evolving situation that seems to be changing daily if not hourly."