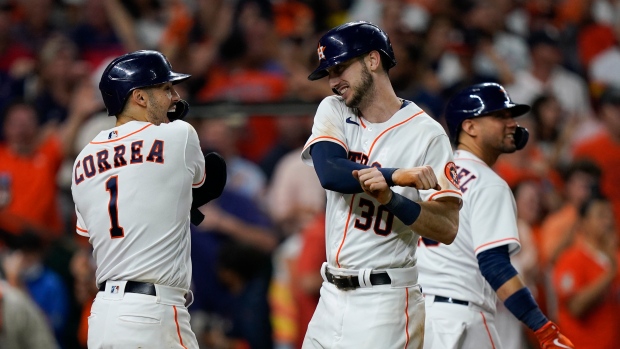 The Houston Astros just competed in their fifth straight American League Championship Series and are headed to the World Series for the third time in the past five years.

That would be considered a dynasty if it were any other franchise, but the Astros are tainted and so is their success. They committed the kind of wrong that is not easily forgotten by those who wear MLB uniforms or the fans who cheer for them. They cheated the game and its fans.

How much of an advantage did they gain?

In 2017, the Houston Astros cheated their way to a World Series championship. In nine home playoff games, where the cheating took place, they hit 18 home runs and scored 49 runs. In their nine road games that postseason they hit only nine homers and scored 24 runs. Eight of their 11 wins on their way to the World Series title were at Minute Made Park.

Stealing signs gave the Astros the biggest advantage of any cheating scandal ever in baseball.  Pitchers would rather face an entire lineup of batters on steroids than a lineup that knows which pitches are coming.

There were consequences. Manager A.J. Hinch and general manager Jeff Luhnow were suspended and then fired, and their former bench coach, Alex Cora, was suspended for a year after stepping away as manager of the Boston Red Sox.

All while the players, who benefited the most, got immunity in exchange for being forthright during the league’s investigation. That continues to rub many in the game the wrong way. Opposing players and fans wanted real punishment but got none of it.

It’s the lack of accountability and remorse that has villainized the Astros even more. The players showed an unwillingness to acknowledge that their success was unfairly gained.

Alex Bregman, Jose Altuve and Carlos Correa are the core of this Astros run. It was Bregman and Altuve who addressed the media in spring training of 2020 to apologize for the sign-stealing scandal.

Their apology rang hollow, lacking sincerity and depth. Correa has been outspoken, and at times defiant, at those who diminish the accomplishments of his teammates and their championship.

Baseball has made changes to eliminate sort of sign stealing the Astros benefitted from, but it hasn’t necessarily cleaned the slate for Houston.

Just this year, White Sox pitcher Ryan Tepera questioned how the Astros hitters were so much better against his team in Houston than they were in Chicago. So, despite the Astros having won 18 road playoff games since 2018, where they would have no access to a system of cheating, the cloud of suspicion remains.

It doesn’t seem like they care, but there is no vindication to be earned this year even if they win it all.

Isn’t it interesting that those who needed to cheat the least, like Roger Clemens, Barry Bonds and, yes, the Astros are the ones who cheated the most? And it has soiled their reputations forever.

It’s unlikely that this Astros’ dynasty will ever get its fair due. They have no one to blame for that but themselves.

Anthopoulos gets another shot at a title

The Astros are going to play a very hot Atlanta Braves team that is well-balanced with strengths in every component of the game.

Anthopoulos took over a franchise that was in very good shape with their player personnel and farm system. But they were dealing with turmoil as the organization was found to have been doing some illegal things in the international amateur free agent market. Braves general manager John Coppolella and some scouts were dismissed, and some minor-league players were made free agents because of signing violations committed by Atlanta.

Anthopoulos not only has made excellent player personnel decisions, but he also signed young talents Ronald Acuna Jr. and Ozzie Albies to extremely club-favourable deals.

The Braves have won the N.L. East for four straight seasons. In 2018 and 2019, the Braves were eliminated in the NLDS. In 2020, they made it to a seventh game with the Los Angeles Dodgers in the NLCS but came up short. This year they beat the defending World Series Champs in the NLCS and are headed to the World Series for the first time since 1999.

While in Toronto, Anthopoulos showed a willingness and capability to make deals at the trade deadline. He was up to his old tricks again this year. He completely remade his outfield by acquiring four impactful players.

The Braves lost two big bats during the season in their outfield. Left fielder Marcel Ozuna was arrested for a domestic violence incident and has been on administrative leave since May 30. Acuna Jr. tore his ACL in early July, leaving a huge void both offensively and defensively.

In early June, the Braves added outfielder Joc Pederson from the Chicago Cubs. Pederson has a big personality and a powerful left-handed swing. He has shown himself to be a clutch postseason performer in the past and hasn’t disappointed his new team.

At the deadline the Braves added Adam Duvall, a player they knew well. The former Brave was playing in Miami with the Marlins and having a great season. He continued his offensive onslaught in his 55 games with Atlanta, ending up second in HR (38) and first in RBI (113) in the National League.

Jorge Soler has huge power. He slugged 48 homers for the Kansas City Royals in 2019, but he struggled miserably in Kansas City this year. Anthopoulos thought he was worth a shot, trying to catch lightning in a bottle. And boy did they! He came over and hit .269/.358/.524 with 14 homers  and 11 doubles in just over 200 at bats.

Finally, Anthopoulos rolled the dice on outfielder Eddie Rosario. He didn’t give up much to get him (Pablo Sandoval) because Rosario was injured at the deadline, recovering from an oblique strain. Rosario has shown he was worth the wait. He has been the Braves hottest hitter in the playoffs, earning the MVP Award in the NLCS (.560/.607/1.040 with three homers and nine RBI).

The Braves are a nice blend of youth and experience. They are hoping to finish things off this year.

This will be a great series. Both teams have very good offences with all kinds of power. Braves’ starting pitchers Charlie Morton, Max Fried and Ian Anderson are comparable to Framber Valdez, Luis Garcia and Jose Urquidy. The bullpens have some good arms and swing-and-miss stuff. It is going to be a closely contested series.

My prediction is the Astros will beat the Braves in seven games. The Astros have home-field advantage which will make a difference because of the crowd factor, not sign-stealing. Plus, the Astros left-handed hitters can hit left-handed pitching, which is a strength of the Braves (Fried, Drew Smyly, Tyler Matzek, A.J. Minter and Will Smith).