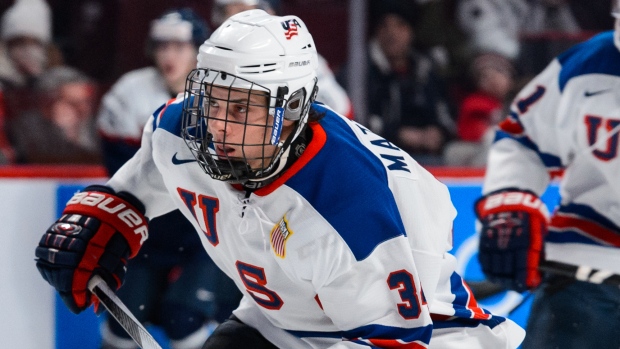 The NHL Draft Lottery isn't until April 30 this year — much to the chagrin of clubs who don't like the two-week, made-for-TV delay (at least compared to previous years) — but on any given morning these days, the odds of consensus No. 1 pick Matthews, an American, ending up in a Canadian city appear relatively high.

Today, it's 70.5 per cent, a sum achieved by simply totaling the percentage possibility of any one of the seven Canadian teams winning the draft lottery. 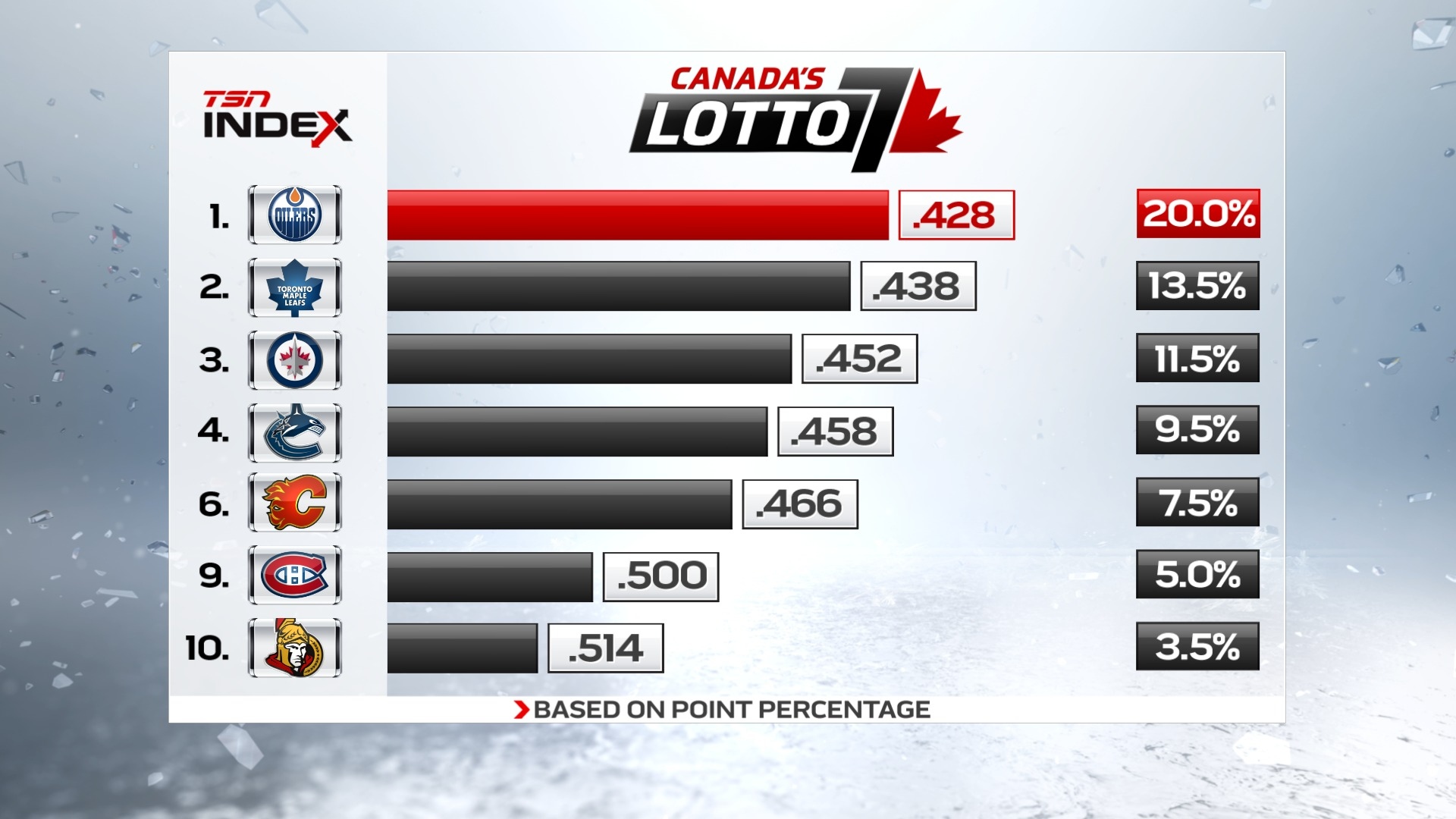 The idea of an American ending up in Canada has apparently spawned an internet/Twitter rumour — now that I think of it, is there any other kind? — ‎that says if Matthews doesn't like the look of the lottery winner (read: Canadian), he'll re-sign in Zurich in the Swiss League, where he played this season.

Like most internet/Twitter rumours, there isn't a shred of substance to it. But it has nevertheless created some angst amongst the fan bases of the seven Canadians teams.

The big centre from Scottsdale, Ariz., wants to play in the NHL next season, wants to be the No. 1 pick in the draft and isn't going to jeopardize either of those for the sake of geography or appearing petulant.

Matthews' agent Pat Brisson totally dismissed the rumour with a "really?" and a laugh.

The funny thing is if Matthews had been born 48 hours sooner, on Sept. 15 instead of his Sept. 17 birthday, he would have been eligible for last year's NHL draft. Had that happened, Matthews would have gone third overall, behind only Connor McDavid (Edmonton) and fellow American Jack Eichel (Buffalo), and most certainly would have gone to his hometown Arizona Coyotes.

What would the odds have been on that, a Scottsdale product falling into the laps of the Coyotes at third overall? A lot better than their chances of getting him this year.

The Coyotes' odds of getting the first pick, as of today, sit at only 6 per cent.

With his Swiss League season having been over for a couple of weeks now, Matthews has been back home‎ in Arizona, resting and re-charging his battery.

That will end soon enough, though.

Dreger: Oilers would keep Matthews if they got him

Looking at this summer's NHL entry draft and what if...the Oilers landed the number one pick...again. How likely are they to shop it?

Matthews will be heading to Plymouth, Mich., to skate and work out with the U.S. National Team Development Program that was he was part of prior to his Swiss draft-year expedition.

Matthews is expected ‎to be named to Team USA for the senior men's world championships in Russia in May. Matthews played a game for Team USA at the Worlds last year before surrendering his spot to incoming NHLers.

This year, the betting is he'll be in for the long haul.

Having done everything he could to establish himself as the top prospect in this year's draft class, Matthews could just shut it down for the rest of the season if he were so inclined. As in, there’s no need to jeopardize his No. 1 status, no need to risk injury — but the kid isn't wired like that. Besides, that's what his insurance policy is for.

He's a hockey player and he wants to play. And develop. He's a proud American and would like to help Team USA win a medal at the worlds to give back to the program that helped develop him.

It's a longshot Matthews would be named to the 23-and-under Team North America for the World Cup this fall but if Matthews wanted to give general manager Peter Chiarelli something to think about, a strong effort at the world championship would be the ticket.

Mostly, though, he just wants to play because he's a player.

More likely than not he’ll be doing that in Canada next season, which shouldn't be a problem‎ for anyone.

We won't know for another two or three months whether the NHL will be expanding, but even the mere hint of a possible expansion draft in June of 2017 may already be influencing how clubs go about their day-to-day business.

Take the case of Kyle Connor and the Winnipeg Jets.

Connor, taken 17th overall in the first round of last year's draft, is the odds-on favourite to win the Hobey Baker Memorial Award as the top player in U.S. college hockey. The University of Michigan freshman left winger leads the nation in goals (35) and points (69) in 36 games played. He's been dominant, a veritable force, and a steal at No. 17 for the Jets.

Connor's Wolverines are in the NCAA tourney that starts this weekend. Michigan plays Notre Dame in Cincinnati on Friday. If Red Berenson's squad wins that game, Michigan would on Saturday play the winner of North Dakota and Northeastern. Two wins would put Michigan into the Frozen Four in Tampa, April 7-9.

But a single loss this weekend would end Michigan's season and, if Connor is so inclined, open the door for him to turn pro and sign immediately with the Jets.

Obviously, Connor's focus is on winning games for Michigan and extending his college season as long as possible. And while there's obviously been no decision made on where Connor will play next season — as a sophomore for Michigan or an NHL rookie with the Jets — conventional wisdom is an NHL first-round college freshman who puts up those kinds of numbers is more likely than not going to turn pro.

Historically, if that is the case, the conventional wisdom is also for the player to sign immediately, as in this regular season. For a player of Connor's age — he turned 19 in December and would turn 20 in the year in which he signed his contract — he needs only play one NHL regular season game with the Jets this season to "burn" the first year of his entry-level contract. Burning a year is generally a positive for the player; it's not always a negative for the NHL club, and even if it is, the joy of knowing the player has turned pro usually outweighs any business-side concerns.

But here's the rub, and why, even if Connor decides to leave Michigan for Winnipeg, he may not sign until the summer: the spectre of the expansion draft.

While all the rules and regulations of a potential expansion draft haven't been firmed up yet, deputy commissioner Bill Daly did tell NHL GMs last week that entry-level players entering their third pro season would need to be protected. Now, there's lots of confusion out there about what exactly that means. We're being told players such as Connor McDavid and Jack Eichel, who burned a year this season and will burn another next season, won't have to be protected in an expansion draft because they're considered second-year players.

But teams, such as the Jets, amongst others, may still be concerned about the precise wording and how it's being interpreted.

For example, if Connor signed with Winnipeg next week, thereby burning the first year of his contract, and played next season with the Jets, he could be entering his third pro season at the precise time of an NHL expansion draft. Does he require protection or not?

Normally, in the event of a Michigan loss this weekend, the Jets would next week welcome Connor with open arms. But they may be hesitant to do that now because of uncertainty over Connor's status for an expansion draft.

As long as Connor turns pro in the summer, not burning a year now is not a huge deal for the Jets, but it is an indication of how an expansion draft that may or may not happen could loom over decisions that were previously taken for granted.

All eyes on Vesey decision

With the NCAA tourney starting this weekend, and the potential for so many college seasons and/or careers to end as early as Friday, Saturday and Sunday, NHL teams will be watching their vested interests closely.

Harvard's Jimmy Vesey, of course, is the biggest storyline. The Nashville third-rounder in 2012 could be done if Harvard loses to Boston College on Friday in Worcester, Mass.

His story has been well documented. He can sign with Nashville as soon as his college season is over, play the rest of the regular season and playoffs for the Predators, or he can wait until Aug. 15 and become an unrestricted free agent and sign with any team he likes.

It's not an easy read on a scoring winger who's believed to be top-nine NHL ready right now.

A big part of me thinks Vesey's loyalty to the team that drafted him and the one thing Nashville can give him that no other team can — an opportunity to play right now and be part of the Stanley Cup playoffs — will win out.

But that freedom to pick and choose where to live and work can be awfully enticing. And if he doesn't sign with Nashville, Vesey could be a consideration to play for Team USA at the world championship in Russia, which could tide him over until free agency this summer.

Preds' GM David Poile obviously hopes it's more the former than the latter. If Harvard loses this weekend, we'll find out in short order.

Toronto Maple Leaf fans, of course, as well as many others in the game, believe Toronto has an inside track because Vesey's dad, Jimmy Sr., was hired last August by the Leafs as an area scout in Boston and Vesey's brother Nolan (University of Maine) was drafted by Toronto in the sixth round in 2014.

I tend to think the Toronto connection may be somewhat overblown — now watch him sign there this summer — but I do wonder how a kid from Charlestown who's graduating from Harvard would feel about putting on the spoked B in his hometown?

Like I said, freedom to pick and choose in an industry where that's rare can be a strong aphrodisiac, but there are many in the game, not just Poile and the Preds, who hope Vesey sticks with the team that drafted and patiently waited for him.

If Vesey is as good as the scouting reports indicate he would be another gun on the wing to join Filip Forsberg and James Neal and the red-hot Preds, who seem to be peaking at just the right time.