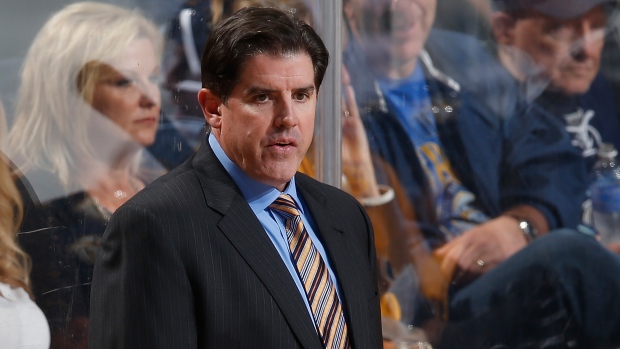 Are the Nashville Predators in trouble?

I offered an opinion on Twitter a couple of days ago after watching Peter Laviolette’s team turn in another stinker, something that was far too common for the Predators in October. While most Predators fans seem to recognize that the team isn’t playing their best brand of hockey right now, two specific counterpoints have been made. One: The Predators have played similarly poorly in the Laviolette era, and that this stretch isn’t particularly notable. Two: The season is still young, and the Predators have plenty of time to rebound.

I think it’s important to note where the cause for concern is here. It’s not Nashville’s 2-5-1 to start the year – we see teams run hot or cold in the standings over small samples all of the time, mostly because the reward for truly playing well (or truly playing poorly) in today’s NHL is only realizable over long periods of time. It’s more that the Predators haven’t been competitive during this eight-game stretch, and yes, that it is a low point for this team.

Consider Nashville’s eight-game rolling shot differential since Laviolette took over. As many have accurately pointed out, the team has ebbed and flowed during his run, with the majority of games falling on the good side of the ledger, mixed with a number of stretches where they have appeared unremarkable.

But, notice where they currently sit. It’s indisputably their nadir under the former Flyers head coach. There’s really only been one other run (early parts of the 2015-16 season) that’s looked even reasonably comparable. 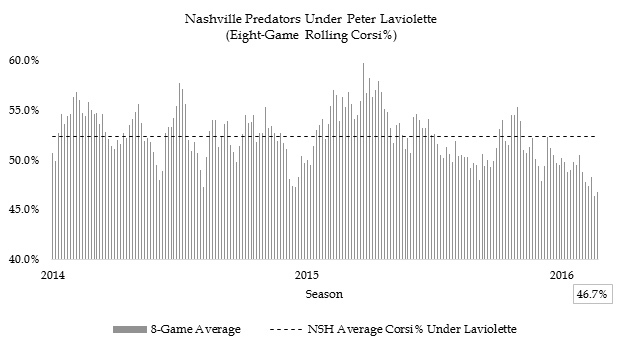 This is a real problem for a Predators team that prides itself in being scrappy, feisty, annoyingly fast and mercilessly aggressive at 5-on-5. In the times they have failed to control the shot clock, they’ve not coincidentally struggled to win games. (The other piece, which is really a story for another day, is how much more vulnerable a team like Nashville would appear during these poor runs than a team like Montreal. Pekka Rinne has been .910 or worse in three of his last four seasons, and his 2016-17 numbers seem headed in a similar direction.)

Since point one is no longer in dispute, we should talk about point two – if Nashville can recover from a rough eight-game stretch and get back to the performance levels of prior seasons.
The data here isn’t encouraging either. While at first pass you might not think eight games of hockey are very predictive of future outcomes, the data suggests they definitely are. Generally speaking, teams who get outshot over the first eight games of the season will continue to be out-shot over the next 74 games of the season. 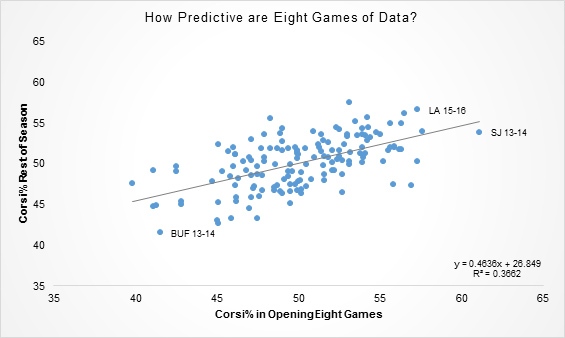 Eight games of data are, in fact, quite predictive of future performance. Generally speaking, poor possession teams in the opening window of the season will remain poor possession teams relative to their peers, and vice versa. There will always be outliers and exceptions to this rule, but I think this does away with the theory that such a small number of games can’t tell us anything about a team’s true talent level.

For what it’s worth, if you were to apply the regression equation to this year’s Predators team, your best guess as to their true possession talent would be around 48.5 per cent — better than what they have currently shown, but still below break-even and a far cry from Laviolette’s usual 52.3 per cent.

The better question to be asking about Nashville is why we’ve seen such degradation on a team that’s experienced very little roster turnover, no coaching staff change and hasn’t went through a scheduling ringer with an abnormal number of back-to-back scenarios.

Historically, when a team bends like this you can either point to one of those three factors or find a bizarre coaching deployment that’s submarined the team. I don’t see anything of the kind for the Predators.  I’ve theorized that the Predators are being victimized by poor performance in the neutral zone – their Corsi% immediately after faceoffs is fine, but performance seems to snowball in a downward fashion from there.

These are, of course, next steps. Lots of people can point to a team, a player, a system and say, “Yeah, that seems broken!” The really actionable piece comes when someone can not only troubleshoot the issues but also provide solutions. To anyone who has theories as to what’s going on in Nashville, please let me know. I’m just as curious as you are.