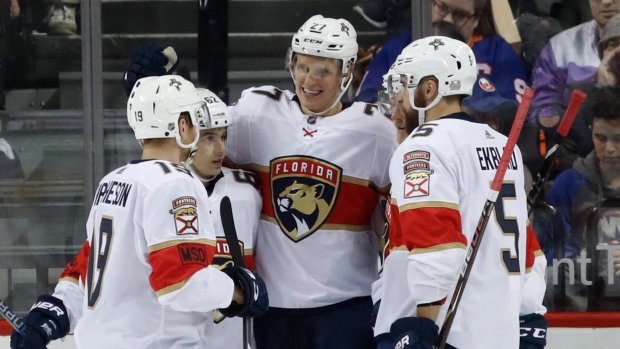 One of the subtle victories of hockey analytics becoming more mainstream is that some of the flawed legacy measures around the National Hockey League have seen less and less utilization.

There’s probably no better example of that than plus-minus. Ten years ago it was one of the most commonly referenced statistical measures in print or on hockey broadcasts. You’ll still see it referenced from time to time, but usually the analyst offering it up offers extensive qualifiers as to why you shouldn’t read much into it.

Why? Plus-minus was our first attempt at understanding how the goals were falling with a player on the ice. But plus-minus arbitrarily chooses to exclude some goals and not others. Most people know this by now but plus-minus isn’t specific to a game state, like even strength. No, for some reason plus-minus includes all even-strength goals, all goals scored with the goaltender pulled, and all short-handed goals. So your most reliable defensive player who gets all of the tough minutes and kills all of the penalties is weirdly held accountable for short-handed goals against.

And more offensive-minded players, especially those on great teams, see their plus-minus padded thanks to handfuls of empty-net goals. (This doesn’t even get into the issue of it being a counting number – it’s blind to ice time, which means guys who play a lot for great teams or really bad teams see their plus-minus move even more aggressively.)

It made sense years ago, but the measure evolved. We now have various forms of Goal%, which simply takes the goal measures (for and against) for any player by game state. Level playing field for all, and a much more meaningful capture of what the game looks like with a player on the ice.

This brings us to other legacy measures around the league, and how we can tell better, more accurate stories while leveraging basically the same data.

I’ve increasingly struggled with the idea of ‘power play percentage’ or ‘penalty kill percentage.’ These measures are frequently leveraged, even today, to describe the efficacy of a team in different game states. Power play percentage shows how many goals a team has scored, divided by the number of man advantages they have had. Penalty kill is the same, but for goals against and associated short-handed opportunities. I’ll focus on penalty kill percentage for the sake of keeping the word count short here, but know that the below thoughts, of course, apply to both.

A great penalty killing team, to be sure, keeps their opponent off the scoreboard. Whether that’s a combination of a blitzing defence, a well-positioned goaltender, or a combination of factors, the general idea is to get off the ice unscathed. But increasingly we have observed teams getting more aggressive on the penalty kill. After all, being down a man doesn’t mean that a team is incapable of scoring!

Consider a couple of examples from last year. The 2017-18 Florida Panthers had, by our penalty kill percentage definition, an average season. They killed off 80.2 per cent of penalties, which was good enough for 16th in the league. But Florida didn’t actually have to kill a ton of penalties in the first place – their 227 times short-handed and 372-minutes of penalty kill time were quite low. And in those limited minutes, they managed to score nine times.

How do they look if we incorporate these additional pieces of data? 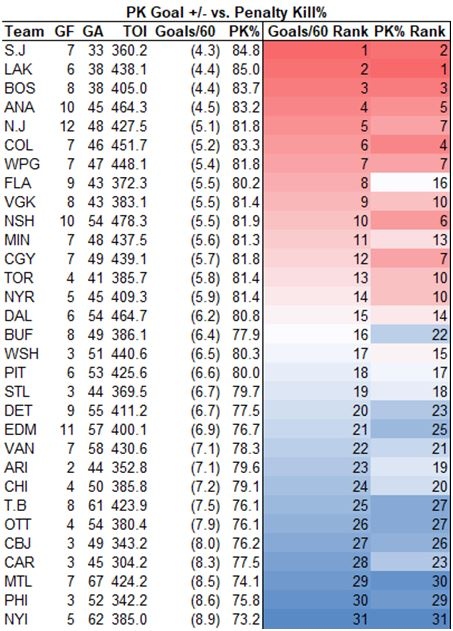 You can walk through a number of other teams with interesting variances (Buffalo starts to look an awful lot better; Calgary, Arizona, and Carolina look worse) at your leisure.

The point here, though, is that creating more meaningful analysis of performance doesn’t always have to involve complex algorithms or exhaustive code. Sometimes just introducing a little bit more logic can help evolve and refine what we know about performance. And that’s always a good thing.