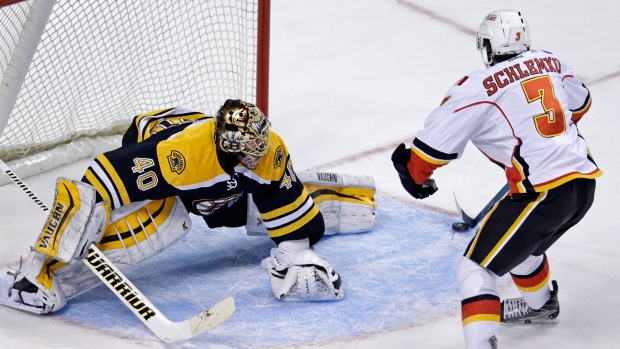 Meanwhile, back to Phil Kessel…the Phil Kessel "rant", as it were….was more of a lecture, really. Since I have no trouble agreeing with most of what Kessel said, I guess my thumb is up to Phil Kessel.

He said Dion Phaneuf is not the biggest reason the Leafs are losing--he's not. Kessel said Phaneuf didn't build the Leafs team--he didn't. Phaneuf is, as Kessel said, the Leafs' best defenceman on many nights. Dion does care, he does try--I don't know anyone on radio or television or in print who has said or written the opposite.

However, it is maintained by some that Phaneuf shouldn't be the Leafs' captain, that his contract is a problem and that he'd be better off in a different uniform. If Kessel wanted to argue those points, there could be a debate. But he might as well have been talking to the dressing room wall when he chose other ones.

Maybe he becomes more famous for doing something else, but if not, let's say thumbs up to Calgary Flames' defenceman David Schlemko for his shootout moment in the sun. His deft move to guide the puck around a helpless Tuukka Rask won a valuable point for the Flames and it provided an updated version of the shootout trickery that once belonged to Peter Forsberg.

If that used to be known as The Forsberg, it now has a new name and owner, comes with a hashtag and follows the Flames' player as #TheSchlemko.

As yet, there isn't a player traded on deadline day who has stood out, but there's one who was claimed on waivers when no one was noticing who found a very good way to fit with his new team.

And all those in and around the NHL who have no use for the shootout should realize again what value it has in showcasing players who would otherwise be ignored. The more stars, the better for any league. In the NHL, you can become a shootout star.

Why not embrace it?