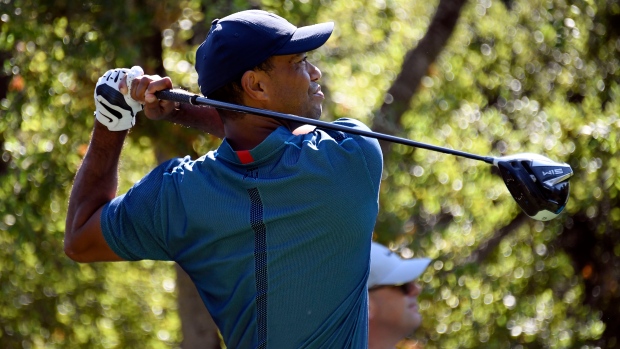 On Tuesday, Woods said he might play the week before the Masters. He hasn’t done that in any year since he started playing the tournament as a pro back in 1997. Of course he’s also never played the Masters in November.

“I think my plan is just to play and practice,” said Woods. “I don't know if I'm going to play Houston or not. I'm not playing next week, and we'll see how this week goes and make a decision from there.”

The comments from the 15-time major champion came while he prepped for the Zozo Championship, which hasn’t changed dates but is in a new location. Last year it was held in Japan but due to the pandemic it’s being held at the Sherwood Country Club in Thousand Oaks, Calif.

This will be his sixth tournament since the PGA Tour re-started after the pandemic pause. It’s also the tournament at which Woods recorded his last win. Even as defending champion, it was thought this would be more of a lead-up to the Nov. 12-15 Masters where he is also the defending champion. But trying to get ready for an event that is usually in April and played before large galleries is going to be next to impossible.

“It's not normally this time of year. It's not normally played this way, the configuration of events,” reflected Woods. “We're not in a Florida swing. This is all different. This whole year's been different for all of us. The fact that the Masters will be held in November, it's unprecedented, never been done before. I can't simulate the normal ramp-up that I normally have, and I don't think anyone else can either. It will be different for all of us.”

Woods is one of the few players who will tee it up at the Masters who has experience with playing it in November. He described the course as playing much longer thanks to colder weather and a north wind.

He said he hit driver and a three-wood into the first hole, and then the same two clubs to reach the green on the 18th.

The players can adjust to the course, but one thing they won’t be able to alter is the lack of cheers. With no patrons, Augusta National will be much different.

“There's no other place like it,” said Woods. “It echoes there, it travels. When you know the pairings, you know where certain players would be at that particular time and you can figure out who's doing what, and the roars for certain people are louder than others, and then you hear eagle roars and hole-outs on 16, or whatever it may be. It's unlike any other place in the world.”

Roars or not, Woods will need to show better form if he hopes to slip on a record-tying sixth Green Jacket this year. In the five events he’s played since the re-start, he’s finished no better than a tie for 37th. Only four of his 22 rounds have been in the 60s.

This week, he’s playing at a course where he’s had success, even if it was just his Hero World Challenge, which usually has a field of just 18 players. He’s won the outing at Sherwood five times. He’s also optimistic about how he’s hitting the ball.

“My game's definitely better than it was at the U.S. Open,” said Woods of the last major where he missed the cut. “I feel a little bit more prepared, a little bit better, and hopefully that translates into playing the golf course.”

Woods’ win at last year’s Zozo Championship came in his first start after a nine-week rehab from arthroscopic knee surgery. It was his 82nd PGA Tour win, tying him with Sam Snead for top spot on the career win list.

While he’d love to take over sole possession of top spot, his eye is on Augusta National.

“The whole idea is to be ready in a few weeks and whether or not that's playing one more event, whether that's Houston or just playing here at Zozo, just making sure that I'm ready for Augusta,” said Woods.