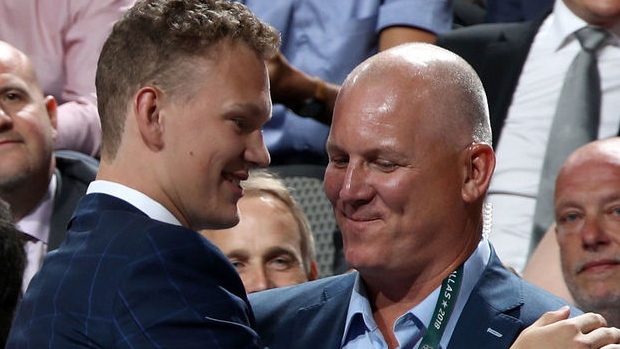 At the end of the summer, Keith Tkachuk hosted a Stanley Cup party at his St. Louis home.

As a member of the St. Louis Blues’ front office, Tkachuk was granted a day with the championship trophy. When it came time for an obligatory family photo with the Stanley Cup, however, his two NHL-playing sons politely declined the offer.

Technically, Brady and Matthew Tkachuk are in the picture – they just refused to pose for it.

“My mom wanted to do a family picture by it and Matthew and I completely refused that,” Brady said on Wednesday.  “So they took the picture right in front of our senior year pictures [on the wall]. It was funny.”

There were some laughs to be had, but when it comes to getting near the Stanley Cup, it’s no joking matter for the Tkachuk brothers. They both firmly believe they need to earn the privilege of being pictured with the Stanley Cup, despite their strong family connection to the Blues’ championship.

“We take it pretty serious. We try our best to stay away and let other people enjoy it, because Matthew and I both have the mindset that hopefully we’ll be winning it someday,” Brady explained. “Matthew and I were at the opposite end of the room and would not go near it, because hopefully one day we can lift it one day.”

In fact, the Tkachuk brothers are so serious about their own pursuits of the Stanley Cup that they even spent time planning out how the parade routes and victory parties would look if they were able to secure a championship for either Calgary or Ottawa.

“Matthew and I – pretty much all summer – we were talking about where our parades would be in our respective cities. And how much fun we’d have with our Cup parties,” Brady said. “We were pretty detailed with it and it was definitely something you visualize after being a part of it.”

The Blues will make their lone visit to Ottawa on Thursday night, which could allow Brady to be reacquainted with St. Louis forward Robert Thomas. Thomas’ status for the game is unclear as he is day-to-day with an upper-body injury, but he spent last season living at the Tkachuk family home in St. Louis as he broke into the NHL.

When Brady returned home in the summer, he watched how Thomas went through the grind of the Stanley Cup playoffs. He attended the Blues’ clinching Game 6 win over San Jose in the Western Conference final as a spectator in the stands. Brady showed his support by wearing a London Knights T-shirt with Thomas’ name on the back of it. Thomas played with Matthew on the 2015-16 Knights team that captured the Memorial Cup championship.

“I just went to one, just to support Robbie. He was still grinding away. It was a pretty cool game and cool to see the atmosphere too,” Brady said of the experience of watching his roommate clinch the Western Conference title on home ice.

Brady didn’t attend any of the games in the Stanley Cup Final against Boston, but he did make his way onto the streets of St. Louis to soak in the atmosphere of the Stanley Cup parade.

“I was there with my dad, my mom and my sister. It was fun it was pretty cool to see how pumped my dad was,” Brady said. “It takes your breath away to see how excited people get.

At the same time as soaking in the celebrations in the city, Brady says he was experiencing mixed emotions this summer around the Blues championship. It sounds like a unique combination of envy and inspiration that can only be experienced by an active NHL player who is trying to win a Stanley Cup of their own while celebrating the accomplishment with a close family member or friend.

“You’re kind of jealous of them,” he admitted. “I was around Robbie and you kind of see what they go through and the wear and tear. It’s pretty cool to see that. I feel like I’ve learned a lot seeing what they went through.”

While neither of the Tkachuk boys agreed to be in the family’s Stanley Cup photo, there was one sibling who happily was front and centre in the picture. Their younger sister, Taryn, – herself a standout field hockey player – had no issues being photographed with hockey’s Holy Grail.

“She can do whatever she wants,” Brady said with a laugh.