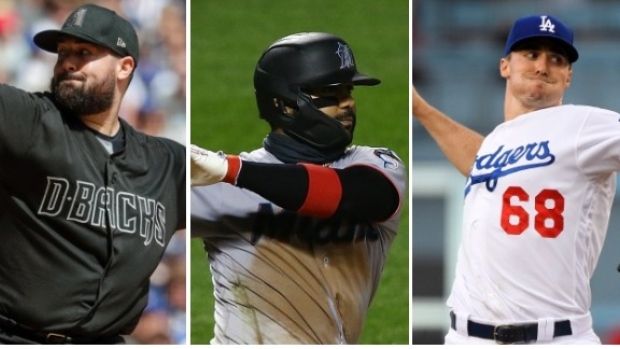 TORONTO — They weren’t splashy moves that added to the core, but the Toronto Blue Jays did what they could to improve what looks to be a playoff-bound ballclub at Monday’s MLB trade deadline.

They were also able to do it without mortgaging the future.

Instead, sticking to the long-term plan, the Jays tinkered and bought low on some depth, adding a pair of soon-to-be free agents in bat-missing left-hander Robbie Ray and versatile speedster Jonathan Villar in separate deals, before engineering a third trade late in the day to acquire right-hander Ross Stripling from the Los Angeles Dodgers.

“You have to discipline yourself,” Blue Jays GM Ross Atkins said at the end of a busy Monday. “There are other things we could have done. I think it’s thinking about wanting that opportunity to continue for us. It doesn’t mean just holding on to prospects, it means continuing to acquire and develop them. We are confident that into this off-season and hopefully next deadline, that we will have plenty of access to continue to acquire talent.”

With the rotation and “run prevention” the clear focus for Atkins, Ray adds an intriguing high-strikeout arm to the pitching staff, albeit one who has struggled mightily with the Arizona Diamondbacks this season, pitching to a ghastly 7.84 ERA across seven starts.

The 28-year-old lefty’s overall body of work, however, is much more attractive.

Unfortunately, he’s also piled up the walks, handing out 31 free passes and throwing six wild pitches in his 31 innings this season.

Add all that up and you’ll find numerous reasons the Jays were able to add Ray for a pittance, sending 26-year-old left-handed reliever Travis Bergen to the D-Backs, while also acquiring cash from Arizona to help offset the salary remaining on Ray’s $9.43 million pro-rated deal.

Ray has been a starter for 153 of his 156 big-league appearances, but he’s no sure thing to be a part of the Blue Jays’ rotation, even if he should be initially deployed that way with Matt Shoemaker (lat) and Nate Pearson (elbow) on the injured list.

Stripling, who has made 59 starts for the Dodgers over five seasons but also spent a good amount of time pitching out the bullpen, will also be in a mix that includes Hyun-Jin Ryu, Tanner Roark, Taijuan Walker, Chase Anderson and Ray.

Atkins says the club is still working through the scenarios.

“They’ve both been really effective over their careers,” Atkins said of Ray and Stripling, who both could be a mechanical tweak away from offering much more than currently expected. “With Robbie, the stuff is still electric and the stuff is there. It’s very public that the arm action changed. We believe he’s working back towards his arm stroke and arm action that he had a year ago, but the stuff is electric and the strikeouts is there. We’re optimistic we’ll be able to get him on to the plate.

“Ross Stripling is a guy who’s been reliable, really good weapons, incredible secondary options and he’s throwing harder this year. He struggled a little bit against right-handed hitting, so hopefully we can help him there, but adding two very reliable arms and one of them that could be a member of our organization for an extended period of time.”

Unlike Ray and Villar, who are both free agents at the end of the season, Stripling isn’t a rental.

The 30-year-old former fifth-round pick from the 2012 draft has two more years of team control remaining and won’t hit free agency until after his age-32 season in 2022.

It’s impossible to chalk up Atkins’ deadline work as anything but a success.

Finding the right roles may take time, but there’s now an abundance of veteran depth on hand as the Jays head into a stretch run as the clear favourites for the eighth and final postseason spot in the American League.

By no means are they a postseason lock just yet, but it’s a better team and a deeper roster today than it was yesterday.

As for Villar, the 29-year-old now-former Miami Marlin’s calling cards are speed and versatility, something that will give manager Charlie Montoyo a few more options when filling out his lineup.

Villar’s most natural position is second base, but the switch-hitter has also seen time at shortstop, third base and outfield, which could help mitigate the loss of Bo Bichette (knee) for another couple of weeks, while also giving Montoyo another third base option behind the struggling Travis Shaw and Joe Panik.

On the strength of his base-running and 40 steals, Villar was worth 4.0 fWAR in 2019, but all that did was earn him a ticket out of Baltimore thanks to his $8.2 million salary.

In order to add the trio of veterans, it’s not immediately clear exactly what they gave up.

Bergen will head to the Diamondbacks, but the Jays had to give up a pair of players to be named later for Stripling, and sent another one to the Marlins in exchange for Villar.

According to Marlins reporter Craig Mish, it will be outfield prospect Griffin Conine going to Miami — where his father Jeff starred for eight seasons — as the PTBNL.

Conine, a 23-year-old second-round pick from 2018, possesses huge power, hitting 22 home runs in just 80 games at Low-A Lansing last year, but the lefty has also struck out way too much, sporting a 35.9 per cent K rate last season as a prospect old for his level.

Now, without sacrificing much of consequence from the next wave of prospects, the front office has done what it could do.

“We knew that if this team played to their capability or even close to it, we would be in a good position to make the major league group better, to make that 26 to 28 to 30 and 40-man roster deeper and more effective,” Atkins said. “Obviously, had things in the win-loss record gone differently, we may not have added as much. Maybe there would have been other opportunities, but we felt very good coming into spring training, as you saw in our off-season acquisitions. We wanted to be in this position.”​