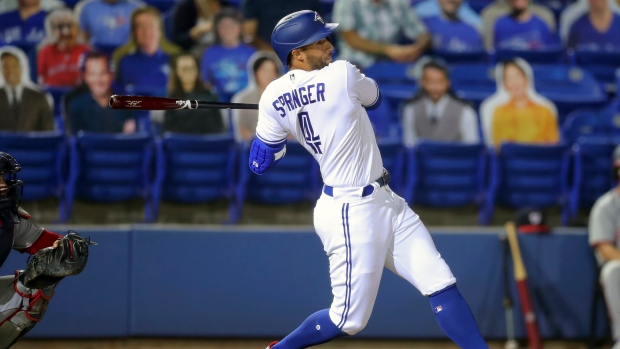 George Springer is finally healthy. It has taken a while for the veteran centre fielder to recover from an oblique strain, which was followed by a quad injury.

Springer finally made his Blue Jays debut as Charlie Montoyo’s designated hitter in the game against the Washington Nationals on Wednesday. He went 0-for-4, but hit the ball hard a couple of times. The Jays lost 8-2 and didn’t feel the full effect of Springer’s presence in the lineup.

I agree with the decision to slot Springer in the DH role for his first game back. I always liked to gradually introduce a player back into the lineup after an extended stay on the injured list. It’s a way to let a player gain confidence in his health before he is on his feet in the field for nine innings.

Jays fans are going to love Springer. As a leadoff hitter, he is both a table setter and a run producer. He has a career .360 on-base percentage while hitting at least 29 home runs and 82 RBI in three of his first seven seasons. He has scored at least 96 runs in four seasons and has a .673 slugging percentage with runners in scoring position since 2019. And in this era of high-velocity fastballs, Springer has a 1.066 OPS on fastballs over 95 mph since 2019.

Springer will make Bo Bichette and Vladimir Guerrero Jr. better hitters by getting on base and into scoring position quite often. He will also help make the seven-through-nine hitters better because he will be waiting in the wings to do damage, which means they should get good pitches to hit.

Springer has shown the ability to elevate his play in big moments. The former World Series MVP is a clutch performer, which should help calm some of the young players who may be prone to jumpiness. He isn’t a base stealer, but has above-average speed and is always looking to take the extra base. Springer isn’t loud, but he is willing to speak up when necessary. He is also an above-average defender in centre field.

Springer will make a big difference to the lineup, and when Teoscar Hernandez returns the Jays will have one of the most formidable offences in the game. It will be a circular lineup – there is no real beginning or end. Every guy in the lineup can all hit for average, hit for power and work the count and take a walk. The Jays will be able to stand toe-to-toe with any team.

Vlad Jr. is figuring it out

One of the other big keys to the Jays’ offence is Guerrero Jr.

Those who had heard about his hitting prowess but hadn’t really seen it yet in his young career had their eyes opened on Tuesday night. The Jays’ first baseman did something his Hall of Fame father never did: hit three home runs in the same game.

Guerrero mashed a home runs to left field and then to centre field off of future Hall of Fame pitcher Max Scherzer of the Washington Nationals. Then, for good measure, he drove a home run to right field off of reliever Kyle Finnegan. He drove in seven runs and single-handedly beat the Nats.

Guerrero looks very comfortable at the plate. He is showing patience and has more walks (17) than strikeouts (15). That shows he is recognizing fast ball from breaking ball and ball from strike. This is allowing him to work the count and find more hitters counts (1-0, 2-0, 2-1, 3-1) where he can look for fast ball or a pitch in a certain zone. When he gets that pitch he is much more aggressive, unleashing his beast of a swing.

He is also taking pitches without jumping toward the pitcher. That means his body isn’t drifting forward, which would change the plane of his bat to the ball and cause a lot of ground balls.

I have spoken about his launch angle quite a bit over the past couple of years. Effectively, launch angle quantifies the bat’s path through the baseball when contact is made. Guerrero’s launch angle was 6.7 degrees in 2019. In 2020 it was 4.6 degrees. He hit a bunch of hard ground balls in his first two seasons.

But this season his launch angle has jumped to 10. 3 degrees. That helps explain why he already has seven home runs. He’s now able to create backspin at contact and lift the baseball.

Guerrero is figuring it out. He looks great physically because of his off-season weight loss. He is able to get the bat to inside pitches that he couldn’t last season because of the extra weight. It is rewarding that his hard work has been met with immediate success. It will reinforce what he needs to do in the future as well.

- The Kansas City Royals (15-8) are off to a surprising start this season and sit atop the AL Central. The White Sox, Twins and Indians were all thought to be division and wild-card contenders. The Royals were expected to be competitive but likely a fourth-place team. I believe they are a hot team, but not a playoff team. It’s too early to truly believe in surprise teams. They have been a great story, but I expect they will slip to at least third place in the division by Memorial Day (May 31).

- The Chicago Cubs have been an all-or-nothing team this year. They either score a bunch of runs or get blanked. They are 11-14 and in last place in the NL Central. They are a team to keep an eye on because if they continue to be cellar-dwellers, they will be sellers sooner rather than later. Almost half of their team will be free agents at season’s end. We could see former MVP third baseman Kris Bryant traded. Shortstop Javier Baez and first baseman Anthony Rizzo could be moved. Catcher Wilson Contreras has one more year before free agency, but if the Cubs are going to rebuild he would bring a huge return.

- The Washington Nationals enter play on Friday in last place in the NL East.  If they don’t make up ground in the division, it could mean that Scherzer will be available at the trade deadline. This is the final season of his seven-year $210-million deal. He could put any team over the top in the postseason.

- In addition to the Cubs players and Scherzer, we could see Colorado shortstop Trevor Story, Cincinnati 2B/3B Mike Moustakas and OF Nicholas Castellanos, Marlins outfielder Starling Marte, Astros starter Zack Greinke, Angels starter Dylan Bundy, Mets outfielder Michael Conforto, and Twins DH Nelson Cruz become available. This has a chance to be one of the most impactful trade deadlines we have ever seen. Because of partial capacity in stadiums, teams that are not contenders will likely trade pricey potential free agents earlier than normal to save money.

- The lack of offence in baseball has become an alarming  issue. The average batting average is currently .232, which is the lowest in baseball history. It is even lower than the .237 average in 1968, which was known as the “Year of the Pitcher.” It was after that season that the mound was lowered from 15 inches to 10 inches. The mound won’t be lowered again, but there is talk of moving the mound back a foot or more and the possibly eliminating shifting in the infield. If the players don’t change their approach at the plate, the commissioner will change the game.