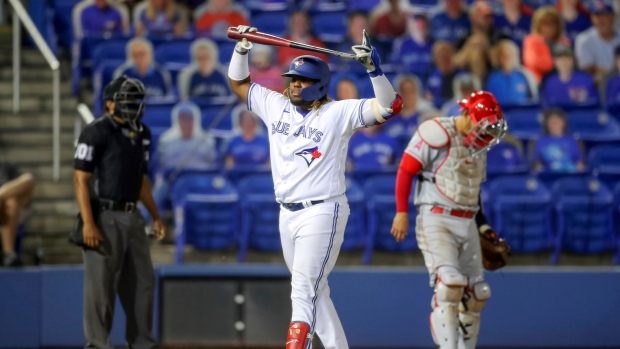 The Toronto Blue Jays’ offence has been dismal with a .208/.272/.367 slash line and only 25 runs in their first seven games. The surprise isn’t that they have lost four of their first seven, it’s that they’ve managed to win three with so little run production.

The reason they have won some games is that the pitching has been better than expected. Their 3.43 earned-run average is good for fifth in the American League. The Jays’ ERA breaks down as follows: a 4.50 ERA from the starting pitchers (10th in the AL) and 2.17 ERA from the bullpen (second in the AL).

The good news is the offence will be much better. The Jays have good hitters who just have gotten off to a slow start. On the pitching side, the starting staff has performed about as expected. The Jays just have to hope that the rotation bends but doesn’t break.  They don’t need to be great, just good enough.

The bullpen has been exceptional so far and it is no fluke. The emergence of Jordan Romano and Ryan Borucki, plus the arrival of Julian Merryweather this season, gives manager Charlie Montoyo the weapons he needs late in the game. The Jays persevered last year when closer Ken Giles was lost to injury and will do the same this year without Kirby Yates.

The Jays have not been a very good defensive team over the past few years, but they have only committed two errors in the first week. The infield configuration with Cavan Biggio at third base and Vladimir Guerrero Jr. at first base is solid and second baseman Marcus Semien is a stabilizing factor. Randall Grichuk has made the early absence of injured outfielder George Springer less of an issue, as he has a .907 OPS and has made several outstanding defensive plays.

The Jays are going to be just fine as the season progresses and will compete for the division title.

Blue Jays team president Mark Shapiro got his five-year extension in January and now general manager Ross Atkins has his too.

This is significant on so many levels. Consistency and continuity are so important for an organization. It means that everyone understands the expectations and accountability from the top of the organization to the bottom. The language remains consistent.

Changing general managers can be like changing offensive coordinators in football. Bringing in a new playbook demands a steep learning curve and stunts development. These front office moves eliminate any need for a restart. The Blue Jays organization can just keep pushing forward.

The impact of these extensions reinforces the positive direction the organization is heading. The rebuilding process is moving along quite nicely, as the Jays’ playoff berth last year indicates. The young prospects have become young stars and there is another wave of talent coming.

Player development and scouting are the foundation of an organization. It is the research and development department. The retention of Atkins and Shapiro for another five years will further establish a clear definition of the Blue Jays way of doing things.

The continuity also maintains the relationships with players and agents. Having the same negotiator from one year to the next provides deeper understanding of each side’s needs.

It has taken Jays fans a while to warm up to Shapiro and Atkins. Ownership clearly appreciates the job that they have done. The pair has done what they said they would do. They have rebuilt the major-league team from within into an exciting and interesting club that should compete for at least the next several years, with the hope of sustaining even longer.

It’s time that the fans admit that these guys know what they are doing.

It appears that we are going to have to continue wait for the George Springer era to begin.

Springer hasn’t played more than 140 games in a season since 2016. He was placed on the injured list with injuries to his left thumb, left quad and left hamstring during his time with the Astros.

This spring he strained his left oblique and had been aggressively rehabbing to get on the field, but on Tuesday he felt tightness in his right quad while running the bases. He could have been activated on Thursday from the injured list but will now remain on it and rehab his new injury.

The Jays need to be cautious and conservative with this most recent injury. They need to take all emotion out of the decision-making process. They can’t react to Springer’s passionate desire to get on the field. He needs to be protected from himself.

Atkins can’t let the fans or media pressure him for Springer’s return either. In fact, as a general manager, there were times I had to check my own emotions of wanting to rush a key player off the injured list. It is hard to come up short offensively like the Jays did over their past three games and not feel compelled to nudge the process.

Springer should only be activated when the oblique and quad are 100 per cent. If either injury is not completely healed, Springer runs the risk of dealing with them all season long. Even worse, he could injure himself more severely and miss a couple of months.

He needs to heal completely and then make sure he is baseball ready. Although there aren’t minor-league games being played now, there are games at the alternate sites where he could get his timing and test his body at game speed.

- San Diego Padres star shortstop Fernando Tatis Jr. injured his left shoulder this week and is on the injured list. The Padres recently announced a 14-year, $340 million deal with the 22-year-old phenom. He was diagnosed with a partial shoulder dislocation and partial tear to his labrum. His shoulder has bothered him off and on for several years but has worsened this spring, resulting in a subluxation. The head of the humerus popped out of the shoulder socket and then back in again when he took a big swing at a pitch.

The Padres are holding off on surgery and hope that he can return after 10 days on the injured list. I’m not as hopeful as they are. My experience is that once the labrum is torn and the bone pops out of the socket, it will continue to do so until it is surgically repaired.  My greater concern is that Tatis Jr. has already had a back injury and now a shoulder injury this early in his career. Both of those injuries can linger and return once that part of the body is compromised. Unfortunately, this is a reminder as how risky megadeals like Tatis Jr.’s can be.

- Blue Jays fans are going to miss out on the opportunity to watch Los Angeles Angels two-way player Shohei Ohtani, pitch against the Jays on Sunday as he had been scheduled. Ohtani is dealing with a blister that affects his ability to throw the baseball. He will continue to serve as the designated hitter, however.

It is unfortunate because it would be a treat to watch the most talented player in baseball display all his gifts.  Not only can he drive the ball over 450 feet with an exit velocity over 115 piles per hour, he is also one of the fastest runners in the game. Speed on the bases isn’t the only thing he does that sparks the radar gun. He has been clocked at 101 mph on his fastball as a pitcher as well. He is a freak of nature when it comes to his extraordinary tools to play the game. Maybe next time.

- Baseball is clamping down on cheating. The commissioner has put rules and systems in place to negate sign-stealing like the Houston Astros were doing. There is also a new level of attention being paid to pitchers now. Despite rules in place banning foreign substances being applied to the baseball, many pitchers have been using pine tar and other sticky substances to improve their grip. Pitchers argue that it was necessary, particularly in cold weather, so they can better control where the ball was going. What we have come to understand is that better grip also means more spin on the baseball when thrown. Increasing spin rate causes more movement on curveballs and sliders, as well as less vertical movement on fastballs at the top of the zone. This makes pitches much more effective.

Reigning NL Cy Young Award winner Trevor Bauer has studied spin rate and its impact on his pitches. He is a true student of the game. He once called out the Astros organization, intimating that their pitchers, many of whom have been around for years, were suddenly increasing spin rate and must be using a foreign substance to do it. Bauer said he had tried in a pitching lab to increase spin on the ball and the only way to do it is by using a substance to improve grip.

Now Bauer is being called out. There are reports that MLB is going to test some game-used baseballs that he threw this season. In 2020, the year in which he won the NL Cy Young Award, Bauer increased the spin rate of his pitches rather dramatically. Bauer’s four-seam fastball increased by 364 rpm. His curveball increased by 377 rpm.

In cracking down on cheating, the league has asked umpires to be more aware of marks or stains on the baseball during games. Plus, game-used balls for all pitchers will be evaluated for foreign substances in a lab. That’s right, we now have CSI-MLB. If a player is found to have used a foreign substance other than the approved rosin bag on the mound, the pitcher will be subject to a fine and/or suspension.

The Dodgers signed Bauer to a two-year, $84 million contract based upon what he did last season. I’m sure they will be awaiting the results of the tests on the baseballs. They want to know if the guy they committed all that money to is the guy they will have over the next two years or whether his performance was perhaps enhanced by a foreign substance.