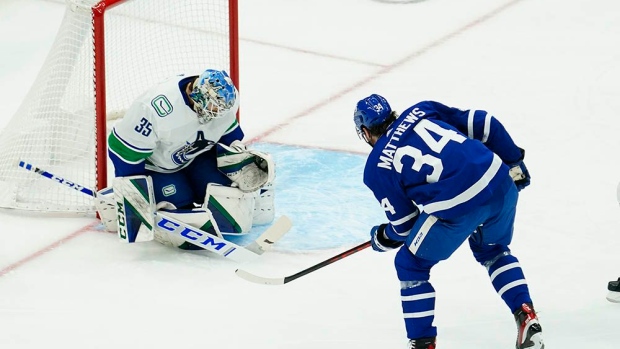 TORONTO – Auston Matthews has struggled with being sidelined for the Maple Leafs’ last two games, impatiently nursing a hand injury while Toronto blanked Edmonton by a combined score of 7-0 over the first two outings of a three-game series.

Coming off another full practice Tuesday, the Leafs’ second-leading scorer is hopeful he’ll be ready for that final meeting with the Oilers on Wednesday, but won’t jeopardize his overall health to do so.

“It's tough not playing; it sucks watching,” Matthews told reporters on a Zoom call Tuesday following Toronto’s practice at Rogers Place in Edmonton. “I want to feel good enough to play and feel like I can contribute and play my game but not hinder my ability long term and throughout the season because, in the end, we're playing for more than just the regular season. So that's a decision that I'll make.”

The 23-year-old has been dealing with some discomfort in his hand and wrist all year, and previously missed Toronto’s game against Edmonton on Jan. 22 because of it. He came back with a vengeance though, scoring 16 goals and 26 points in his next 15 games to take over the league-lead in goals at 18.

Then came the Leafs’ meeting with Calgary on Feb. 24, and Matthews re-aggravated the injury, although in a slightly different way than it had bothered him before. The centre didn’t go into specifics of when in that contest it happened, but he’s been working to get his strength back to not only shoot the puck how he wants to, but to win faceoffs as well.

“It's a little bit of everything,” Matthews said of what he needs to get back. “But it's been progressing and each day I've been on the ice it has felt better and better and I've been able to be more comfortable out there with the way I want to play and the way I want to handle the puck. Hopefully it just continues to heal and continues to get better and we'll see how it is tomorrow; I'd love to get back in a game here.”

Thus far, Toronto hasn’t missed a beat when Matthews is unavailable. The Leafs are 3-0-0 on the season when he’s been out, and held both Connor McDavid (the NHL’s points leader with 40) and Leon Draisaitl (tied for second-most points at 34) off the scoresheet in their recent shut out wins over Edmonton. And they did it while starting goaltender Frederik Andersen was also out of commission with a lower-body injury: On Saturday, it was backup Jack Campbell with the 30-save win, and then third-string netminder Michael Hutchinson racked up another 30-save performance on Monday.

Campbell was playing his first game in a month on that night, and he also re-aggravated the same leg injury suffered back on Jan. 24 against Calgary. Head coach Sheldon Keefe said Campbell will not be available for either Wednesday’s tilt with the Oilers or Thursday’s match against Vancouver, but after a “positive” practice day for Andersen on Tuesday, he may well be ready to return after a four-game absence.

While the Leafs’ goaltending has been impressive of late, Matthews has also gotten a front-row seat to observe how the Leafs’ defensive game has evolved, and why it’s leading to such lopsided victories.

“It just speaks to the commitment from everybody on the defensive side of the puck,” he said of Toronto’s most recent wins. “[McDavid and Draisaitl], they're going to get their looks. But it's just trying to limit that, and our goalies have been playing unbelievable so it’s a full team effort. I think we're realizing what it really takes to win and it's going to be playing well on the defensive side of the puck for us to really break through and play a long time in playoff time.”

The Leafs still have more than half their regular season slate to get through before postseason play will begin, and Keefe is doing his best to manage players accordingly. To that end, William Nylander was given Tuesday’s practice off as a maintenance day to “settle down” a minor injury issue that he’s been wrestling with. Despite that, the winger has been among the Leafs’ best forwards lately, scoring his fourth goal in three games during Monday’s win.

For the most part, Toronto has done an admirable job handling a litany of injuries and adjustments to date. And Keefe feels that speaks volumes about not just his team’s talent, but its character, too.

“It's really great for us to have that [persevering] mindset, and most importantly to have the players just press on and make the [changes] to our game that we need to,” Keefe said. “When you're playing without Auston Matthews, you're essentially taking a goal out of your lineup, and thus you have to make sure you're that much better defensively. Our mindset certainly has been next man up. I think all of those things give you the extra confidence that when somebody goes down, you can deal with it.”​