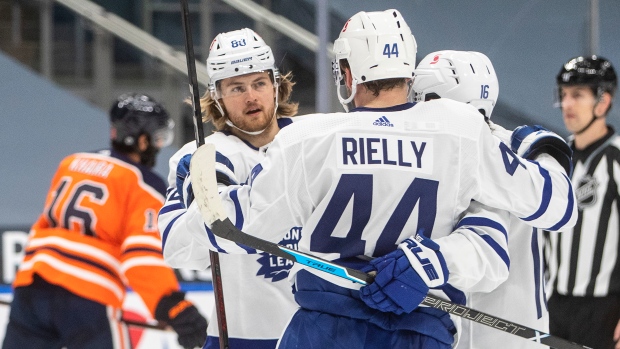 TSN Toronto Reporter Mark Masters reports on the Maple Leafs, who practised on Tuesday in Edmonton ahead of Wednesday’s final game of their three-game series against the Oilers.

Before the Leafs opened training camp a few guys – Joe Thornton, Auston Matthews, William Nylander, Rasmus Sandin and Mac Hollowell – returned to Canada and quarantined together in the same house. And it was there that the 'Willy Styles' nickname was born.

"It comes from Jumbo when we were in a quarantine house together," Nylander revealed. "He started calling me that so I put that on my sticks now."

William Nylander has two sticks on the bench for warmup. One says ‘Nylander’. the other says ‘Willy Styles’. pic.twitter.com/LowI8AkUZo

What motivated the moniker from Thornton?

"You know what, you'll have to ask him," Nylander said with a smile. "I don't know."

Nylander certainly isn't afraid to make a splash with his fashion choices off the ice.

"It's different, but it suits his personality," said even-keeled captain John Tavares. "Me and him always joke about how we're very opposite of each other, but we get along really well. People would see me as being a lot more reserved, kind of a little bit quieter, and Willy's just a fun, outgoing guy and obviously likes to be a little bit different and showcase that, which is fantastic. It's part of who he is and what makes him a great person, a great teammate, a great player so, obviously, we love having him and those styles."

William Nylander made a hairstyle change that caught the attention of a bunch of NHLers. MORE @ https://t.co/hDrKHpOSKO pic.twitter.com/2k0IH4APii

Nylander also possesses style on the ice and is on a hot streak of late with four goals in three games. He scored a backhand beauty over the shoulder of Mikko Koskinen moments after a neutral-zone draw on Monday night.

"He has that elite skill and you know when he gets his chances the majority of the time they're going to go in," said Leafs defenceman Justin Holl. "Some guys just know how to score and he's one of them."

And while Nylander recently admitted to underperforming at times this season, there's no denying how valuable he is to a Leafs team that has won a couple games this week without leading goal scorer Auston Matthews in the lineup.

"He's very important," said head coach Sheldon Keefe, who hasn't hesitated to give Nylander a metaphorical kick when necessary. "He has an ability to make the difference in a game, because in any shift and any time he can make a difference offensively. He can do the hardest thing to do in our game, which is to produce offence and that makes him extremely valuable to our team."

But Nylander appears to have a crimp in his style right now. He was in discomfort on the bench after scoring in the first period on Monday and was conferring with head athletic therapist Paul Ayotte. A little later, during a commercial break, Nylander was doing a lot of stretching.

A lot of stretching too. Perhaps Nylander pulled something pic.twitter.com/1MPXQxbZh7

"Just a maintenance day for him," said Keefe. "He's had something that he's been managing and playing through here and just wanted to give him the day to let that settle down."

Nic Petan skated as a placeholder in Nylander's spot on the second line.

Matthews practised in his usual spot on the top line skating between Thornton and Mitch Marner.

"It's feeling a lot better," the 23-year-old centre said. "It's been progressing and each day I've been on the ice, the last two, three days, it's felt better and better. [I've] been able to be more comfortable out there with the way I want to play and the way I want to handle the puck and stuff like that. So, hopefully it just continues to heal, continues to get better and we'll see how it is tomorrow. I'd love to get back in a game here."

Matthews missed one game with a wrist injury earlier this season. He hurt the wrist again last Wednesday against the Flames.

With the Leafs sitting comfortably in first place, there's certainly no rush to return. The top priority is ensuring Matthews will be at his best when the most important games are played.

"I want to feel good enough to play and feel like I can contribute and play my game, but not hinder my ability and long-term [prospects]  because, in the end, we're playing for more than just the regular season," Matthews said. "That's a decision I'll make and the training staff will discuss, but I don't think we're really going to over-complicate it."

Frederik Andersen practised again on Tuesday as the goalie works his way back from a lower-body injury sustained on Feb. 20. Jack Campbell took the ice after practice wrapped up.

"Andersen had a positive day today and that's a great thing for us," Keefe said. "We'll have to see how he is tomorrow and make a determination from there. Campbell skated, but he's not going to be available."

Campbell re-aggravated a leg injury, initially suffered on Jan. 24, during Saturday's game. He still managed to post a shutout against the high-octane Oilers. Third stringer Michael Hutchinson followed that up with another clean sheet on Monday.

"I just wanted to open it up with comments about our goalies," alternate captain Morgan Rielly said before a question could be asked during his media session following Monday's game. "The past two nights they've been outstanding and they don’t get enough credit. Soup and Hutchy have been outstanding for us all year and two games in a row against a good team has been just a huge boost to our team. That’s all I wanted to say."

The Leafs made life easier on their goalies by limiting Edmonton's time and space in the offensive zone.

"If you're playing without Auston Matthews you're essentially taking a goal out of your lineup," said Keefe, "and then you have to make sure you're that much better defensively and you don't give up anything so I think that's been our mindset ... It really forces you to fall back on your structure, play as a team, get guys to step up at key moments, all those kind of things."

NHL scoring leader Connor McDavid has been held without a point in consecutive games for the first time this season.

“They're playing solid," the Oilers captain said. "Give them a lot of credit. They've had some good goaltending. They're defending well. They're surrounding pucks well so they're making it hard on us ... They're obviously missing some key pieces, but it speaks to their depth, their coaching and the players themselves. They've played well. I don't know what else you want me to say."

Since Day 1 of camp, Keefe has made improving the team's overall defensive play a priority. They've been looking to cut down rush chances against and prevent other teams from hemming them in their own zone for long stretches.

"The defensive foundation and mindset is not a one-man thing," said Keefe. "It's not relying on a few players. That's a team mindset. That's playing in groups of five and insulating each other. When one man makes a mistake you got the numerical advantages and the pressure to make up for it ... we're getting to the point here now where we're proving that we're a team that can defend well."

The Oilers are averaging 3.29 goals per game (fifth in the NHL) this season, but couldn't get a puck past Toronto's back-up goalies and frustration with evident.

McDavid took a cross-checking penalty on Holl on Monday.

Alex Chiasson cross-checked Jimmy Vesey in the neck after the buzzer in the third period and was assessed a one-game suspension.

Edmonton’s Alex Chiasson has been suspended for one game for Cross-checking Toronto’s Jimmy Vesey. https://t.co/EU3N6sbCo9

"They're probably trying to look for a spark so it's all very understandable and it's part of the game and we're looking to be physical right back," said Holl.

Josh Archibald and Travis Dermott dropped the gloves in the last minute of the game, but it turned into more of a wresting match. After practice ended on Tuesday, Dermott got some fighting tips from veteran defenceman Zach Bogosian.

Keefe likes how his team has handled things on the few occasions that things have gotten heated this season.

"Our guys aren't fazed by it," the coach said. "I think that's an important thing. We've added some extra experience to our team. I think that makes a difference. Guys are comfortable no matter which way the game goes."

The line of Zach Hyman, Pierre Engvall and Ilya Mikheyev has shown so much potential in Edmonton that nicknames for the unit are making the rounds. Some like the HEM Line because they are good at keeping the opposition trapped in their own end. Some prefer the ZIP Line, because they bring so much speed and energy.

You can certainly call them effective.

"They're both so big and strong and fast," Hyman said of the 6-foot-5 Engvall and 6-foot-3 Mikheyev. "​I think we're able to put pressure on the opposing team's D and break out of our zone quick. They've been really fun to play with. I feel like we have the puck a lot because we can all skate and we can all move up and down the ice really well. We're trying to use their speed as much as possible and put the puck in position for both those guys to skate onto it and once we're in the zone just control some O-zone time."

The line has produced a goal in both games in Edmonton with Hyman scoring both.

Tape to tape and a backhand beauty! #LeafsForever pic.twitter.com/brMlQrqgGO