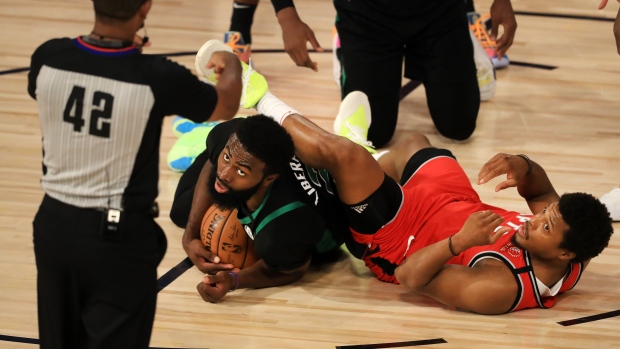 TORONTO – On the eve of their most important game of the season, the Raptors can’t seem to shake the enemy. Such is life in the NBA bubble.

They see the Celtics in the lobby of their shared Disney hotel. They cross paths going to and coming from practice. They’ll bump into each other on walks or while grabbing a bite to eat. Brad Stevens even spotted Nick Nurse riding his bike as he took a morning stroll the other day.

“Personally speaking, from what I know, I like the guys [on the Celtics], but right now I hate ‘em,” Toronto’s Fred VanVleet said on Tuesday, roughly 30 hours before his Raptors aim to keep their season – and championship defence – alive in a must-win Game 6 of their second-round series, which Boston leads 3-2.

”Nothing about this series – or the NBA postseason in general – has felt normal, which is fitting given the circumstances. What is normal these days, anyway?

“I don’t think [we’re] heading for rocket-science territory if we say this is the [strangest] playoffs ever,” said Nurse. “It has been a strange series, with the way the games have been played, but everything’s been abnormal, right?”

Through five games, the Raptors have sandwiched three entertaining, hard-fought performances – two of them resulting in wins – in between a couple of embarrassing blowout defeats. It’s hard to pinpoint what exactly went wrong in those bad losses, which makes it impossible to see them coming or know how to prevent them from happening.

The simplest explanation for Games 1 and 5 is that Boston came out with a greater sense of purpose and took Toronto out of its comfort zone early with its stifling defence. The Raptors missed shots they’re used to making, got frustrated and lost their composure.

However, there’s more to it than that – an intangible concept that teams shouldn’t have trouble mustering up at this time of the season, let alone the defending champs. Does it really come down to effort or energy level?

But where does that energy come from, where does it go, and – most importantly – how does a veteran team with a championship pedigree fail to bring it in a pivotal game after working so hard to fight their way back into the series?

Were all the minutes they’ve logged over the past week finally starting to take their toll? Did they take their foot off the gas and lose that sense of desperation after evening up the score?

“I don’t know,” VanVleet said. “If I had the answers I would try to solve it. Just a combination of really bad play on our part, embarrassing effort sometimes, lack of shot making, lack of execution, and you add that to a team that if you let them feel good they’re really hard to stop. And so that’s what you see. They’re kind of a streaky, hot, explosive team. And so, when you don’t put yourself in a position to succeed then you set yourself up for those big deficits and then it’s just hard to get back after that.”

The Raptors shot 20 per cent, hit just one of their nine three-point attempts, and were outscored 25-11 in the first quarter of Monday’s 111-89 loss. By the second quarter their deficit swelled to as many as 28 points. Given how well Boston was playing, the game was basically out of reach.

“There were holes all over the place, there was bad play everywhere,” VanVleet said. “So you can pick whatever you want, whether it was shot making, bad defence, no effort, soft, not physical, you name it. It was about as bad as it gets for us.

They watched the film, and will do so a few more times before game time on Wednesday. They can and they will make adjustments.

Kyle Lowry will try to overcome the defensive prowess of Marcus Smart – who spent more time guarding him in Game 5 – and look to attack, as he did in Toronto’s two wins. Nurse and the guards will find ways to get Pascal Siakam more involved, particularly in the opening quarter, where he’s been virtually invisible in this series.

They’ll encourage Marc Gasol to be more aggressive in hunting his own opportunities to shoot and score. They’ll try to free up their undersized guards, VanVleet and Norman Powell, who have been stymied by the length of Boston’s defenders.

They’ll also hope that Serge Ibaka can play through his ankle injury – he was in a walking boot on Tuesday and is listed as questionable for Game 6.

They can make a lineup change, tighten or expand the rotation, tweak the schemes or coverages, but none of that matters if they don’t play harder and do it right from the jump.

This is a team that rarely makes things easy on themselves, frustrating as that may be. Some of the franchise’s biggest moments have come as a direct result of missed opportunities.

Kawhi Leonard can’t hit his iconic walk-off jumper if the series with Philadelphia doesn’t go the distance. The Raptors can’t dig themselves out of that 2-0 hole against Milwaukee in last year’s Conference Finals if they don’t dig themselves into it to begin with. OG Anunoby’s miraculous buzzer-beater in Game 3, set up by the remarkable inbounds pass from Lowry, doesn’t have some impact if the team isn’t a half-second away from certain doom. Call it a flair for the dramatic, because there’s no other way to explain it.

Here they are again – backs against the wall, season on the line. There aren’t a lot of good reasons to feel confident about their chances of winning two elimination games against this tough Boston club that has already blown them out twice in this series and four times this season. Still, would you be shocked if they managed to pull this off?

It wouldn’t be the first time they’ve come back from the dead. They’ve bent before, but it’s going to take a lot to break them.

“I think playing every other day and your season depends on it, 3-2, you don’t really have time to look back and sit in it,” said VanVleet. “It should hurt. It should sting. It should be disappointing. You should be pissed off, but all your focus has got to go into Game 6. So we’ve just got to get one. That’s our main focus right now, is locking in on Game 6 and trying to come out of there with a win, because our season depends on it. So it’s not really that hard. Short-term memory, we’ve been through the playoffs before, we know the ups and down and what it takes.”