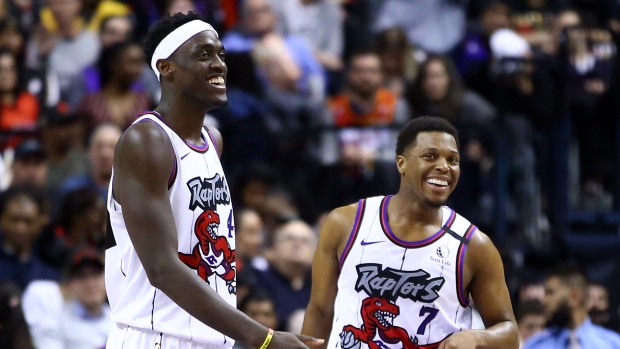 Over a three-day period – from Tuesday to Thursday – the 22 teams participating in basketball’s attempted restart will make their way to Walt Disney World Resort in Orlando, Fla., with the hopes of resuming the halted 2019-20 season later this month.

Once they’ve arrived on campus and check into their assigned hotels, all players and personnel will be expected to remain isolated in their rooms for at least 36 hours until they’ve returned two negative COVID-19 tests.

Then, assuming everything goes according to plan, teams will finally be permitted to train and practice together as early as this coming weekend – a monumental step considering they had been limited to individual workouts and haven’t shared the court since early-March.

It’s a crucial time for the league, given what they’re up against.

The state of Florida has become a coronavirus hotbed, recently surpassing 200,000 cases and routinely setting daily records for positive tests. Major League Soccer – who are also attempting a restart on the Disney grounds – have experienced setbacks and had to start postponing matches because of an outbreak of the virus in their bubble.

The NBA “bubble” won’t actually operate as a bubble, as Disney employees will come and go from the campus. Meanwhile, positive tests have already forced seven teams – the Nets, Nuggets, Suns, Heat, Clippers, Bucks and Kings – to shut down their own facilities as a precautionary measure.

In other words, there’s a lot riding on this phase going smoothly.

The Toronto Raptors, who just got a brief taste of what life will be like in the bubble, offer some hope. On Thursday, the defending champions will make the short trip from Naples to Orlando for the start of training camp.

As the only team granted permission to reconvene outside of their home city, 45 members of the Raptors organization – including all 17 roster players – have been in Florida since June 22. For two weeks they went back and forth between their hotel – which was closed to the public and reserved exclusively for them – and nearby Florida Gulf Coast University, where they trained.

They haven’t reported any positive tests – though that doesn’t necessarily mean there haven’t been any – and, fortunately, they haven’t had to shut things down. It was an unusual experience but they insist it felt safe, all things considered.

“Let’s not get over-confident but let’s say [I’m] slightly more confident [that things will go smoothly in the bubble],” Raptors head coach Nick Nurse said, via videoconference on Tuesday afternoon. “It feels like we are in a safe environment. We’re going a long ways out of our way to make it extra safe, as we should. I think that contributes to it. We really are in the hotel. We’re confined. We’re away from everything. There is cleaning all over the place. Everybody is wearing masks. We go to the gym and there’s cleaning and we come back. It feels really safe.

“I think the early stages or days of the Disney thing are critical – getting a whole bunch of testing done I think it will all be done at a really high level and remain fairly safe. I hope I’m right. Again, this is no time to [get too comfortable], you really don’t know, but I would say I feel much more safe than maybe I thought I was going to.”

However, a two-week sample size is small, and so is Toronto’s travelling party relative to what the NBA will have to contend with once all 22 teams arrive on site by Thursday evening. Instead of managing the safety of 17 players and 45 people in one hotel, they’ll be responsible for roughly 374 players and 814 people in three hotels, and that’s not including league personnel, media or Disney employees.

The ‘lucky’ two teams that make it all the way to The Finals will spend more than three months in the bubble. More than anybody else, the Raptors have an idea of what that might be like. Still, they’re hoping to be one of those teams and are bracing themselves for a lengthy stay.

“They've had great attitudes,” Nurse said of his team. “I’ve hardly sensed any boredom or waning or [guys complaining about] another day of one-on-zero work. I've sensed great energy, great professionalism. The vibe in the gym, even though it's different, has still been pretty good. We’ve still got our music playing and you look across the floor and guys are working and sweating and getting better. So, it's been a pleasant surprise and a pleasant experience so far.”

One of the challenges the bubble presents is being away from loved ones for an extended and indefinite period of time, something the Raptors have already been faced with. Many of Toronto’s players and staff members left young families behind in order to participate in the league’s restart. Nurse has two kids under age four. Fred VanVleet has two kids under two. Toronto native Oshae Brissett has a newborn daughter.

While players will eventually be able to have up to three guests join them in the bubble, that won’t happen until after the first round of the playoffs, and coaches may not get that privilege at all.

“I think that it's really another part of the puzzle, and it's a big one,” Nurse said. “For me, I would say that it starts with conversation, when you're bumping into Fred or Kyle [Lowry], and you're asking 'em how are the wife and kids, and what are they doing, and when was the last time you talked to them. There's a lot more of that going on than I would say normally would happen. It's not like we don't do it normally but there's a lot more now because we're all showing pictures and whatever. I just think from my standpoint, it's another one of those things you'd be more lenient on. Like, [for] example, [if] we're getting ready to start a meeting and right as that happens, somebody says oh, man, my kid's FaceTiming me, and you say take it, go out in the hall and take it and we'll wait for you.

The Raptors are confident they’re in good mental and physical condition as they get set for the next phase of this long and arduous process. They certainly appear to be, at least when you look around the league.

Several players on different clubs have already opted out of the restart, for various (legitimate) reasons. The Brooklyn Nets – a potential first-round opponent for Toronto – are down six rotation players, for instance: Kevin Durant, Kyrie Irving, Wilson Chandler, DeAndre Jordan, Spencer Dinwiddie and Taurean Prince, with the latter three opting out after testing positive for COVID-19. The Washington Wizards, who are chasing Brooklyn for one of the final playoff spots in the East, will be without their three best players in the injured John Wall and Bradley Beal, as well as breakout forward Davis Bertans, who opted out.

According to Nurse, all 17 Raptors players are healthy and available heading into camp.

“We’re not gonna count any chickens, that's for sure,” Nurse said. “I think as each day of testing goes by you've got a bit of anxiety to get that email at night from the doc and see what the results are. But, first and foremost, we’ve been safe, so that's been good.”