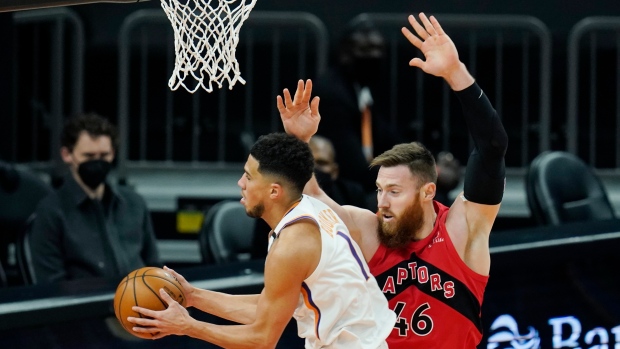 TORONTO – The Raptors went from spending more than $50 million on the centre position in 2019-20 to less than $16 million this season and, as the old saying goes, you get what you pay for.

When they lost Serge Ibaka and Marc Gasol in free agency over the off-season – partially of their own volition – they knew and accepted that things were going to be different in the frontcourt.

Having one of the league’s best big men tandems had been a nice luxury – it helped propel them to a championship – but it was ultimately deemed just that; a luxury. So, Toronto cobbled together a makeshift group of replacements and hoped that would be enough to fill the void, while banking on internal growth and its strength at other positions to make up the rest of the disparity.

Through seven games to open the new campaign, and with a disappointing 1-6 record, that appears to be wishful thinking now.

Veteran journeyman Aron Baynes, who was signed to supplant Gasol in the starting lineup, has underwhelmed and even seemed unplayable at times. He was one of the best centres left on the market after Ibaka and Gasol turned down modest offers from Toronto, and he’s been a serviceable big for good teams in the past, but he’s looked lost on the floor with his new club.

Since scoring 24 points on 11-of-20 shooting in his first two games as a Raptor, the 34-year-old has totalled 13 points on 6-of-25 over his last five. He played 27 scoreless minutes in their most recent losses to Boston and Phoenix, and was benched for all but six second-half minutes in those contests.

The Raptors are essentially playing four-on-five offensively when he’s on the floor. Teams aren’t respecting his jumper – he’s shooting 3-for-16 from three-point range, so far – and he continues to have difficulty catching and finishing around the basket. He’s not a rim protector, like Ibaka was, and he hasn’t been as defensively sound as Gasol to make up for the lack of offensive punch.

Alex Len – the former fifth-overall pick who was signed as a reclamation project after spending his first seven NBA seasons with three losing clubs – hasn’t shown much, either.

In 25 combined minutes against their former team, the Suns, on Wednesday, Baynes and Len recorded one point and six rebounds. Together, they’re averaging 8.5 points and 7.9 rebounds on the season. To put that into perspective, Gasol and Ibaka averaged 22.9 points and 14.5 rebounds last season, while shooting 39 per cent from three-point range and anchoring the team’s second-ranked defence.

As it stands, the Raptors’ best option at centre might be to go without a traditional centre.

Chris Boucher has impressed in his expanded role, and while his tendency to get overmatched by bigger and stronger post players make him more of a natural power forward, he’s easily the most dynamic and higher upside alternative at the five.

The obvious question, and concern, is whether he can man the middle in certain matchups without sacrificing too much on the boards or in the paint. Toronto has been out-rebounded 147-104 with Boucher on the court this season. The counterargument is that rebounding has also been an issue with Baynes (minus-48 on the boards) and Len (minus-14 on the boards) out there, so are those guys really helping you enough in that area to make up for all the things they’re not doing as well as Boucher?

For now, it appears Baynes will remain a starter, but the leash is getting shorter, especially as the Raptors continue to lose games. Boucher has been Nick Nurse’s most consistent source of energy coming off the bench, and Toronto’s head coach may prefer to keep him in that role, but the continued struggles of Baynes and Len could force his hand and prompt a change sooner rather than later.

“Gotta evaluate everything,” Nurse said following Toronto’s 123-115 loss to Phoenix – arguably its most complete performance of the season, and certainly Pascal Siakam’s best game in months, but another loss nonetheless.

“Aron’s had a couple of tough ones here after having a couple of real good ones at the beginning, Gotta get him back playing to at least a sustainable level, just an average or maybe slightly above average level. He seems to be a real good game or a real not-so-good game [player]. We just need a little bit in the middle, but we’ll probably keep looking at that.”

Another option is to go small, as they did to close Wednesday’s game. For the final eight minutes, Nurse went with Kyle Lowry, Fred VanVleet, Norman Powell, OG Anunoby and Siakam. Although they weren’t great offensively, they held the Suns to a remarkable 75.0 points per 100 possessions and outscored them by 4 – cutting the deficit, which was as large as 15 points, down to six on a couple occasions.

That was the team’s second-most used five-man unit in last year’s seven-game playoff series against Boston – it held the Celtics to 85.0 points per 100 possessions and outscored them by six in 32 minutes – though it had only logged three minutes this season, prior to Wednesday night.

It’s hard to see Nurse starting games that small, but you can expect to see a lot more of that unit moving forward, especially in crunch time.

“I thought tonight it looked pretty good,” Nurse said of the small lineup. “I thought we cut a lead down and it seemed like the defensive possessions were really good in it. It enabled us to switch. [Phoenix] did try to force-feed it inside a little bit and we did a good job of swarming [Deandre] Ayton and making some good switches to get some size back on him. So yeah, we could see it but it’s tough when they have a big big like that out there.”

The reality is the Raptors don’t have an optimal solution at the centre position, not on the roster, at least not anymore. Individually, Gasol and Ibaka were imperfect options – with the former regressing on the offensive end at this stage of his career, and the latter beginning to slip on defence. Together, they complemented each other well, though, and either of them would be a significant upgrade over what they’ve got now.

It makes you wonder whether Masai Ujiri and Bobby Webster would do things differently, in hindsight. Would they have offered Ibaka a second year of guaranteed money if they knew Giannis Antetokounmpo – their presumed target in the summer of 2021, and the biggest reason why they were hoarding cap space – was going to sign his extension? Would they have been more aggressive with their one-year offer to Ibaka – which reportedly started at around $12 million – if they knew Gasol was headed to the Lakers, or realized how difficult those guys were going to be to replace?

That Ibaka wanted, and expected, to remain with the Raptors makes this rare misstep from Toronto’s front office even more glaring. Ibaka wasn’t perfect, but he checked off a lot of boxes. He was a steadying presence on offence – virtually automatic from mid-range and somebody that would keep the defence honest with his ability to step out and drain the three. He was a good, albeit declining, defender that could still protect the rim at a high level and switch or close out on the perimeter. He was a proven winner and an important voice in the locker room.

It’s not easy to find serviceable modern bigs – let alone really good ones – that you can plug into a consequential role on a team with winning aspirations, as the Raptors have learned. They had one, let him get away, and are now reaping what they sowed.

Production from the centre position, or the lack thereof, isn’t the only issue responsible for the team’s slow start. It’s not even their most pressing issue. It has been an issue, though.